We started out the busyness of August with Brick Fair at the Dulles Expo Center on the 2nd. It was Men & Boy’s campout weekend but there weren’t any going with boys our boys ages so we decided to go to Brick Fair since Laura has been wanting to take the boys for the last few years. We figured eventually the boys will outgrow Lego so we’d better take them while they enjoy it. Abby & Gwenyth were in Texas so Robby was just going to take his boys to work with him so we invited to take them along with us. Kaylin was invited to an American Girl craft day at Sherry Martin’s. We dropped her off at 8:15 am then picked up the Cox boys and headed up to DC. Bobby and Laura came as well bringing Kenley & Luke Woods as well as Luke’s friend Bradley. When we arrived the line was already getting long (or so I thought) and the parking lot was full. I hopped out to get a place in line to buy the few extra tickets we needed to get everyone in. Chester parked and got everyone else around and out to the line for people who already had purchased tickets. Leyton ended up standing in line with me as we just needed to buy 2 tickets. The rest got to go inside at 10:30. By the time we went inside there were 100’s of people in line. I couldn’t even see the end of the line as it went all the way down the row of buildings and around the corner. INSANITY! The rest of the day was spent chasing boys around the expo center, hoping they weren’t spending their entire life’s savings. They had a blast building mini figs, looking at displays, drooling over Lego pieces, etc. I felt like I didn’t see a lot of the exhibits as I was taking kids to the bathroom, getting snacks, watching some bounce in the bounce house, etc. We decided to just go outside and eat some snacks instead of going to get lunch since we would probably have a hard time finding a parking spot and we would use up our time that we could be at the Brick Fair. We ate snacks out on the curb. The lines were still as long as you could see on both sides of the building. (That was after 1:00.) We ended up having to stand in a re-entry line as they had to shut the building down for a bit until enough people came out as they were at max capacity. We got back in and finished looking around. Chester had the great idea of building mini figs for his Life on The Flight Deck project. I had fun helping him dig through bins of pieces to make his guys. Kolby ended up falling asleep towards the end so I took him over to a seat and played Bingo while I waited for the others to finish up. Bryant came with me and played with his Lego pieces. He was sure we almost won a set of Lego on the Bingo game. (I love the confidence kids have in you.) We grabbed some freezies and then headed to the Air & Space Museum at 3:45. Perfect timing as we arrived right at 4. (Right when you can get in free and not have to pay for parking.) We hiked around the museum for a few hours before heading home. We stopped at Panda Express for dinner. I got so cracked up at Carson and Brooks. Robby had given them money when we left to pay for tickets, food and if they were to buy something. We realized one of the reasons they had wanted to just have snacks instead of going to get lunch was so that they would have more money to spend on stuff.

They bought their dinner and realized they had a few $ left over. After eating they decided to spend their last few $ and buy a bag of fortune cookies for their Dad. I chuckled listening to them talk together. It went something like this: “Let’s buy a bag of fortune cookies for Dad. Yeah let’s!” Then after going and buying the bag of cookies, they came back to the table and were admiring their purchase. “Dad’s going to love these! I think Dad likes fortune cookie. I guess?”  It was so cute. We made it home around 9. The boys played for a little bit until Chester was ready to take them to town to drop them off and pick up something off of Craigslist. (Yes I know it’s an odd hour to meet for a Craigslist purchase.) 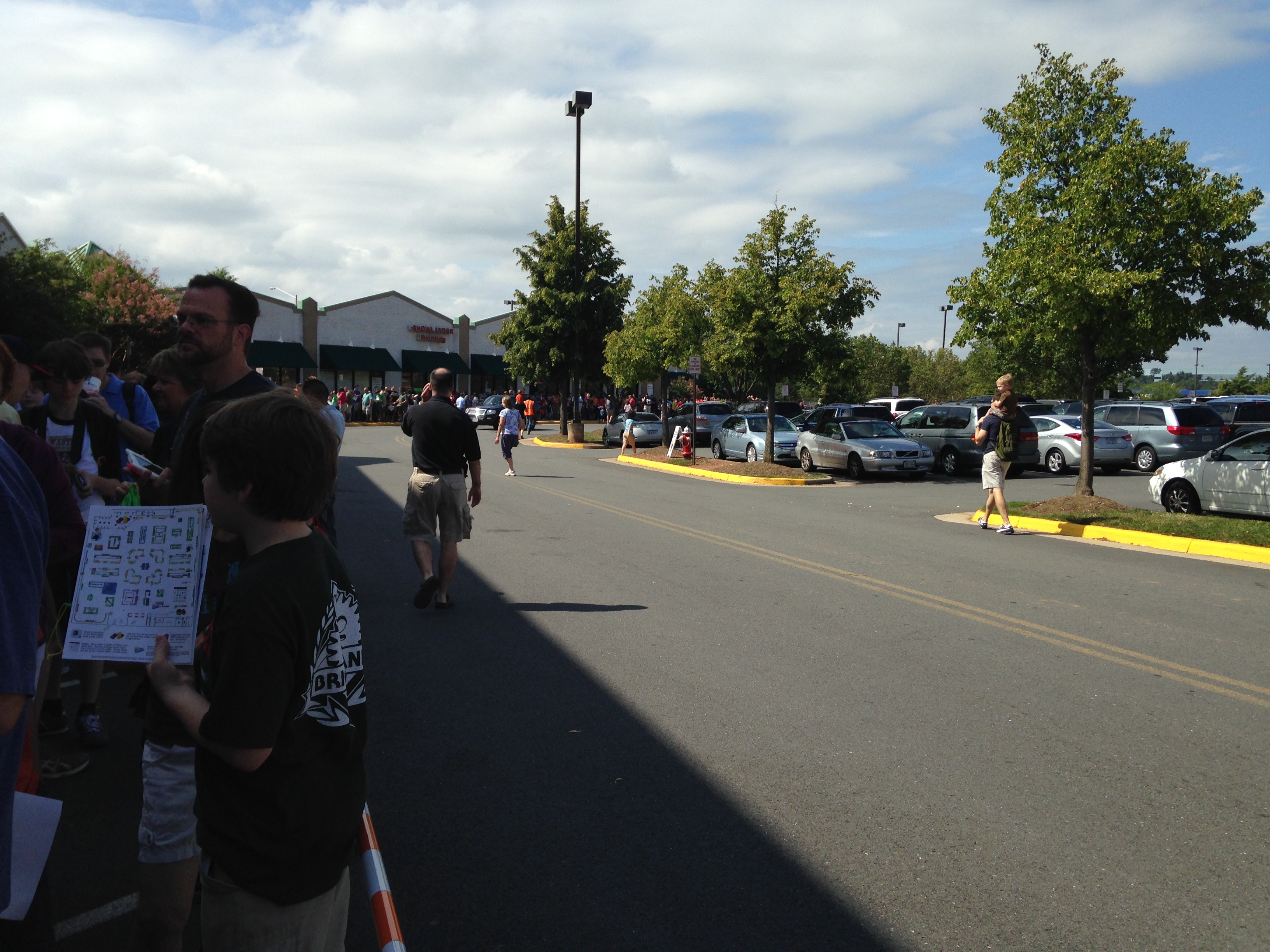 I wished i could have gotten a better picture of the 100’s of people in line. It zigzagged by the entrance then just stretched down in front of all these other buildings and disappeared around the buildings behind the trees. 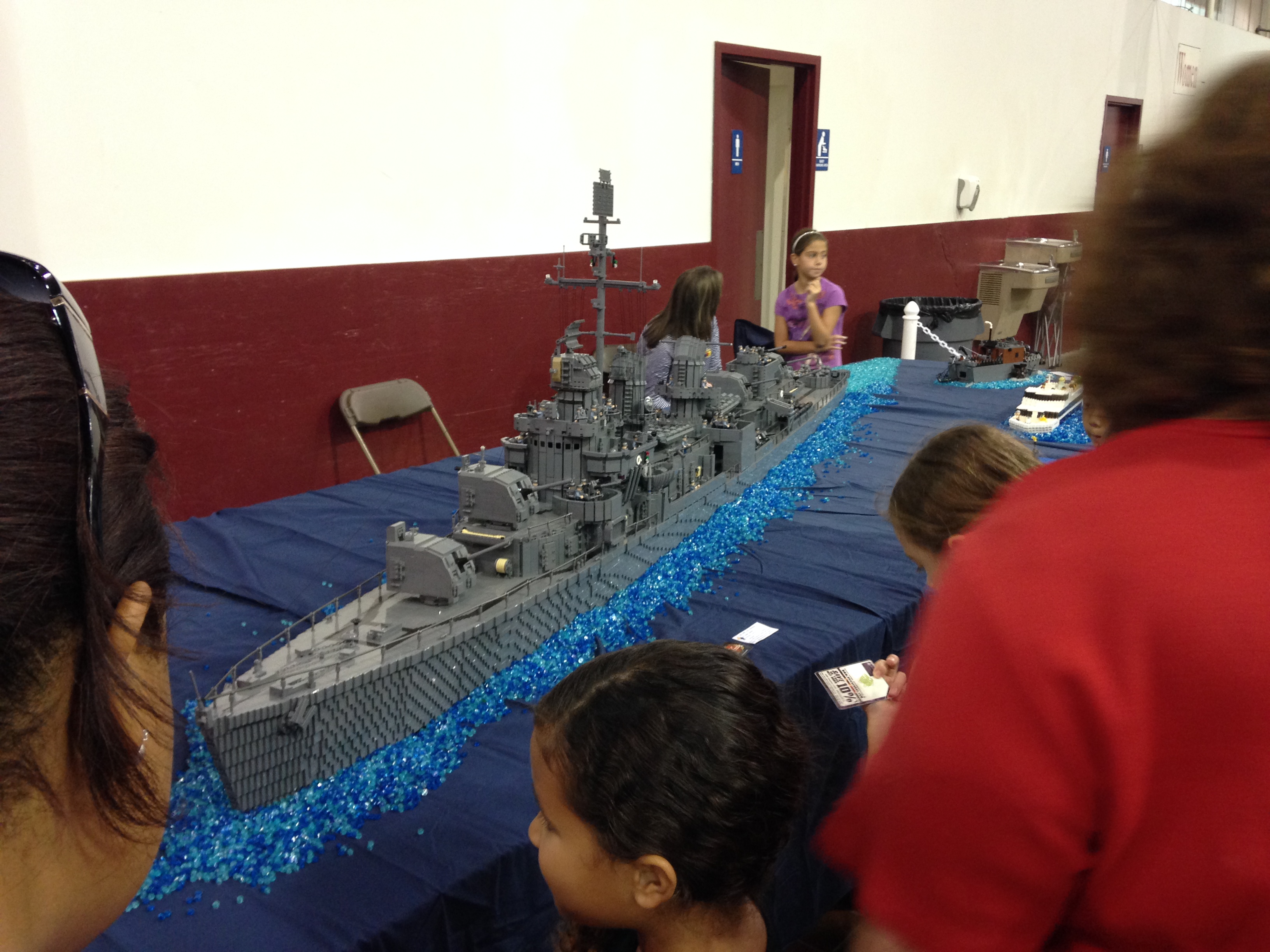 An incredible Navy Ship. I forget how many 1000’s of pieces were used. 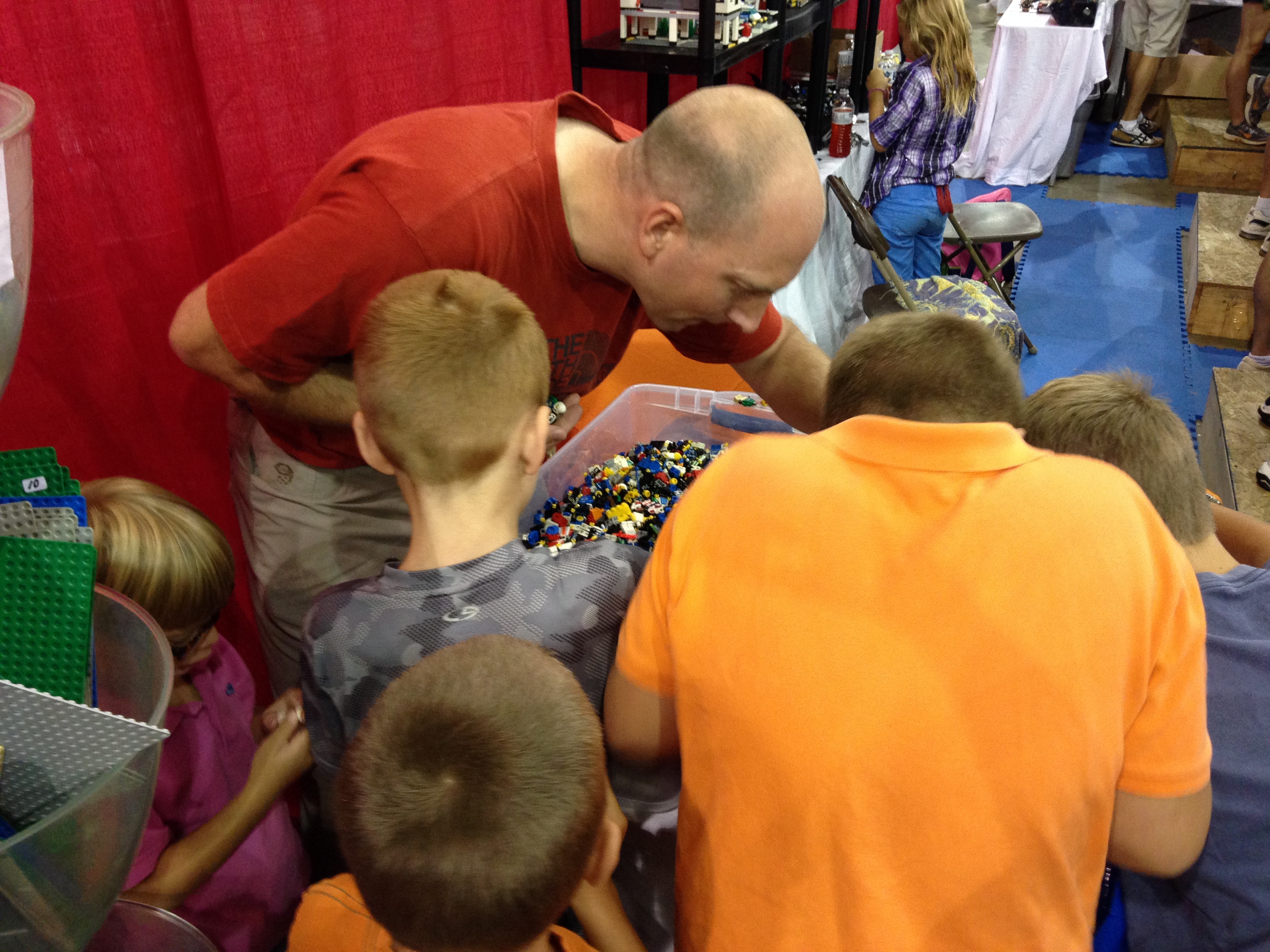 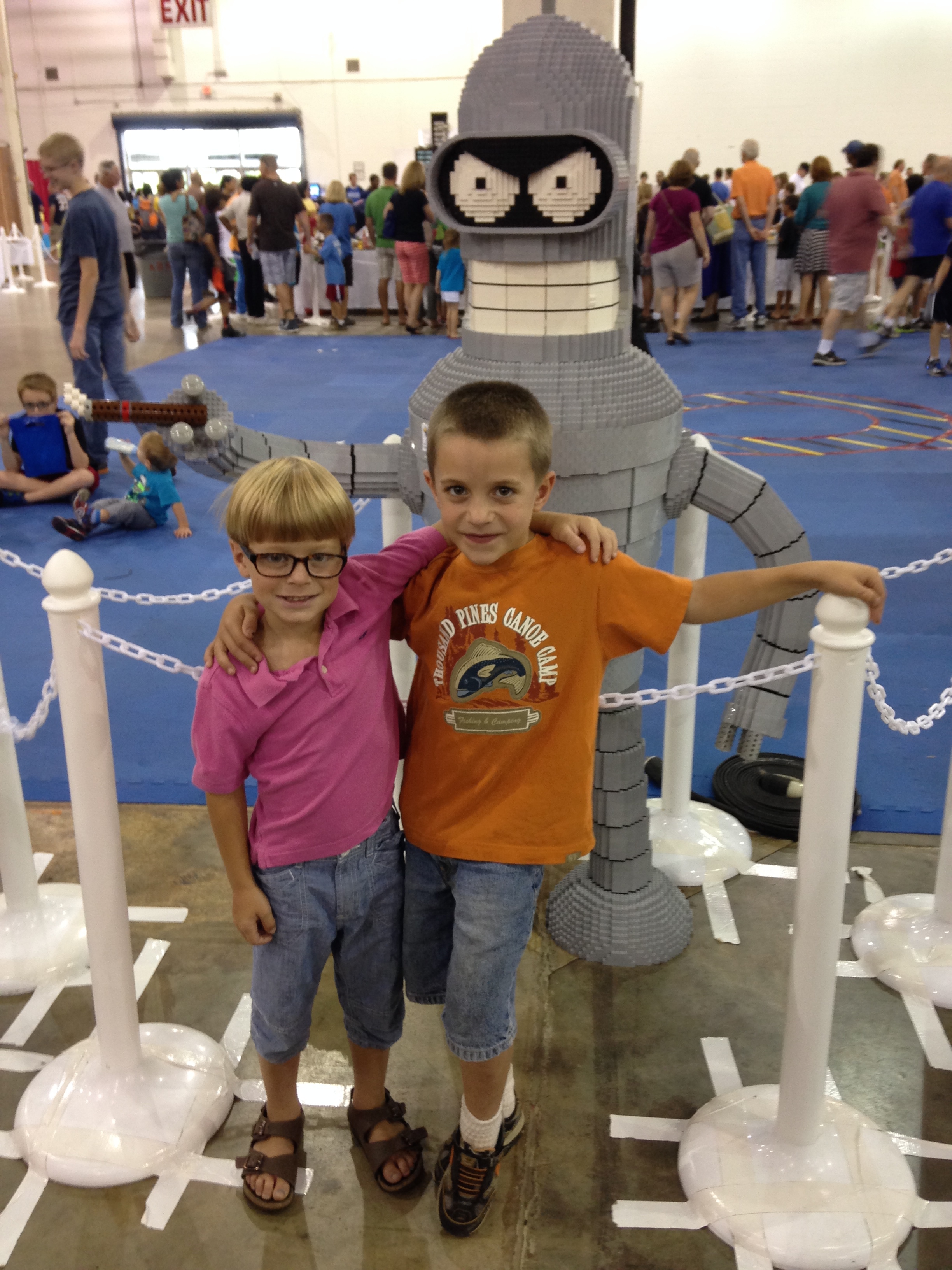 Leyton & Bryant by the Lego Robot. 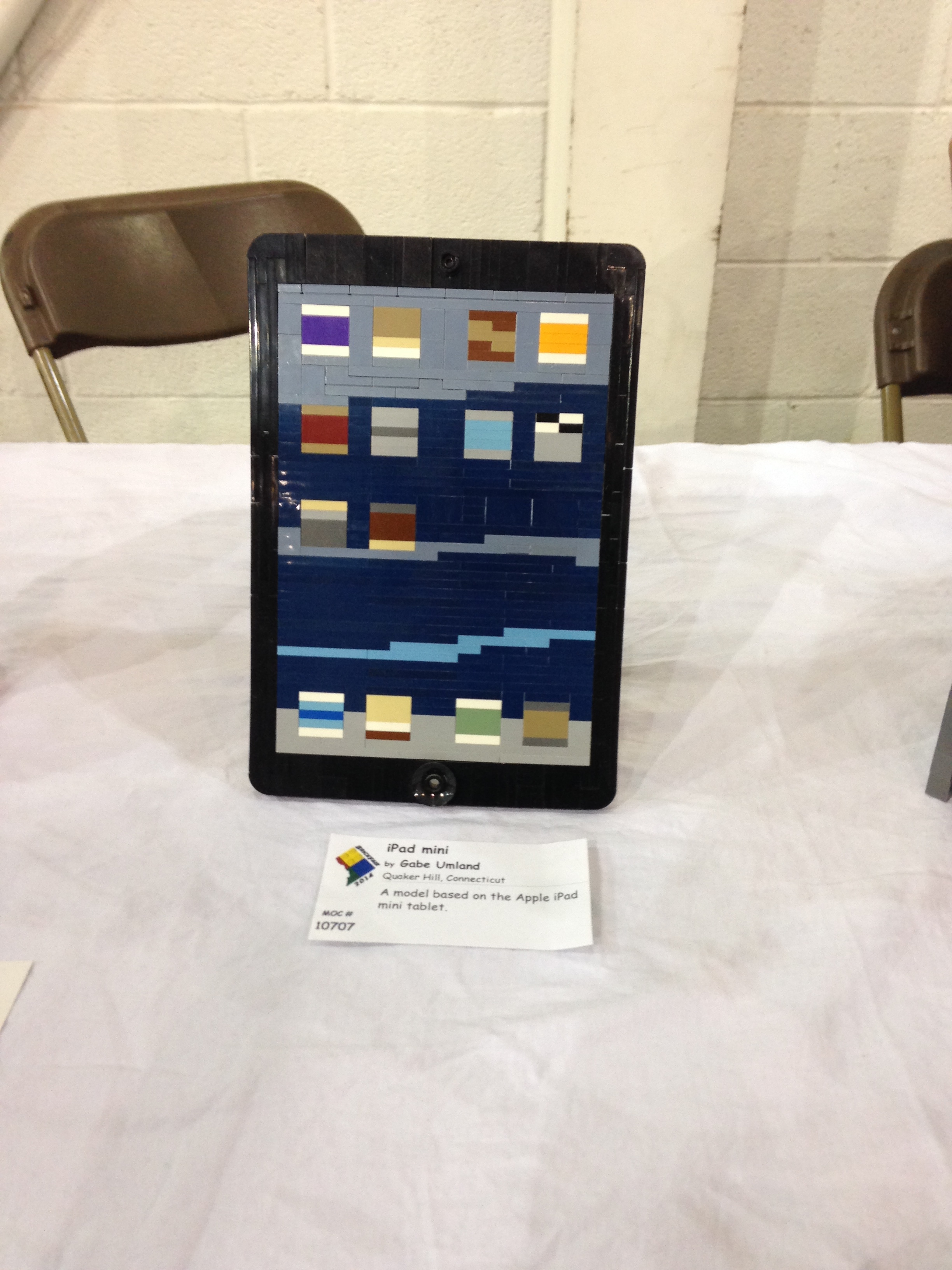 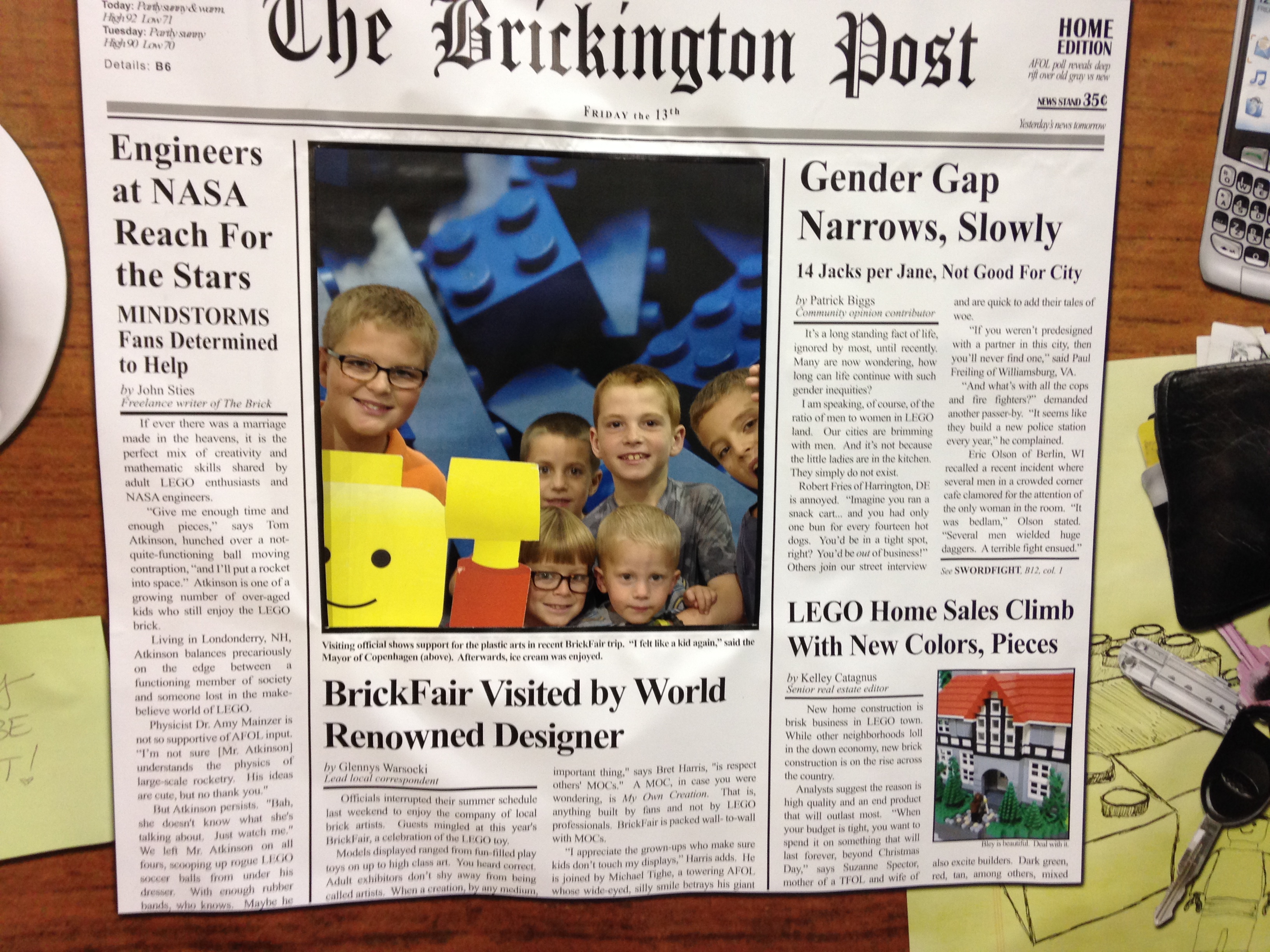 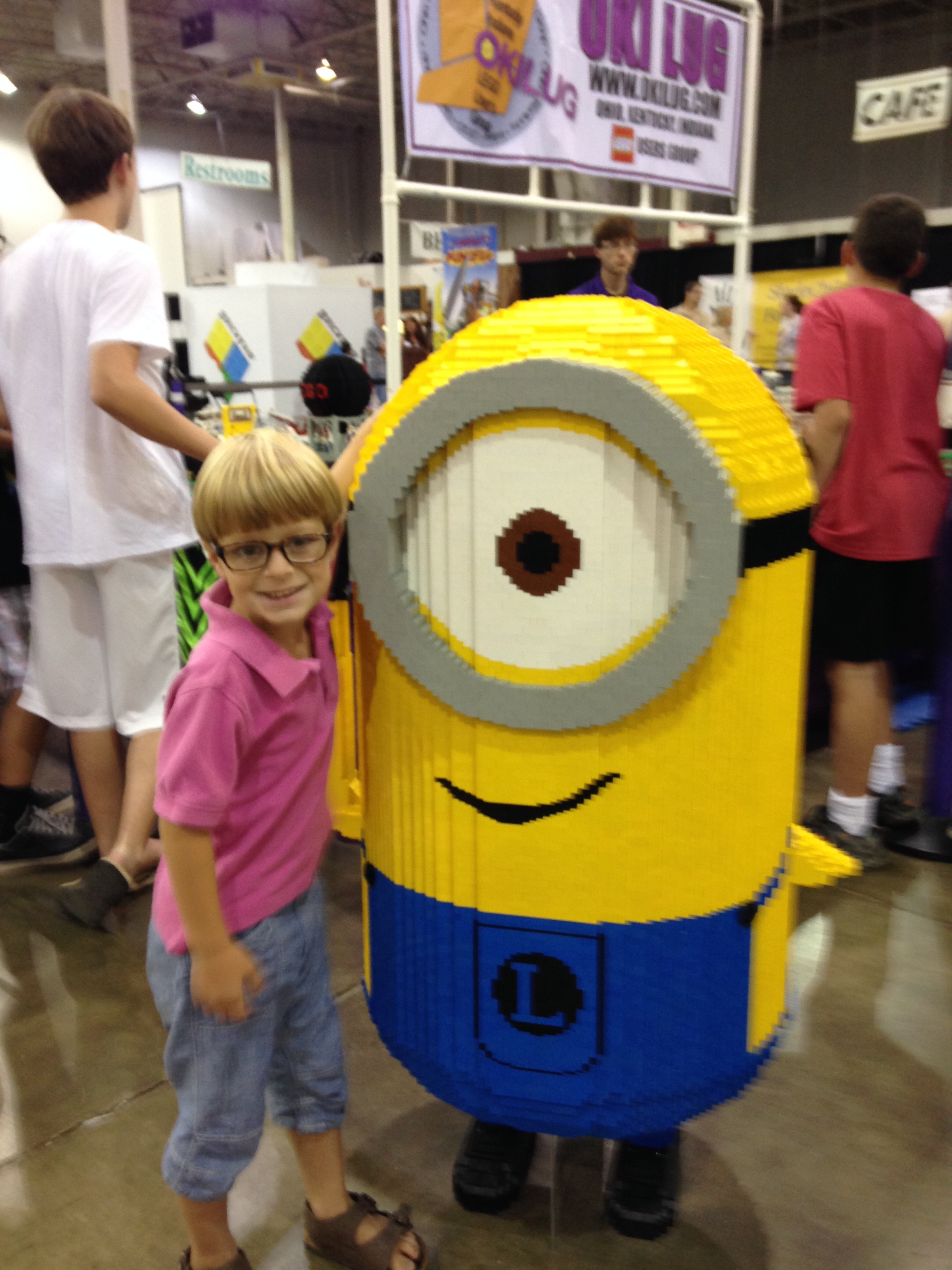 Leyton wanted to get this picture to send to his mom. 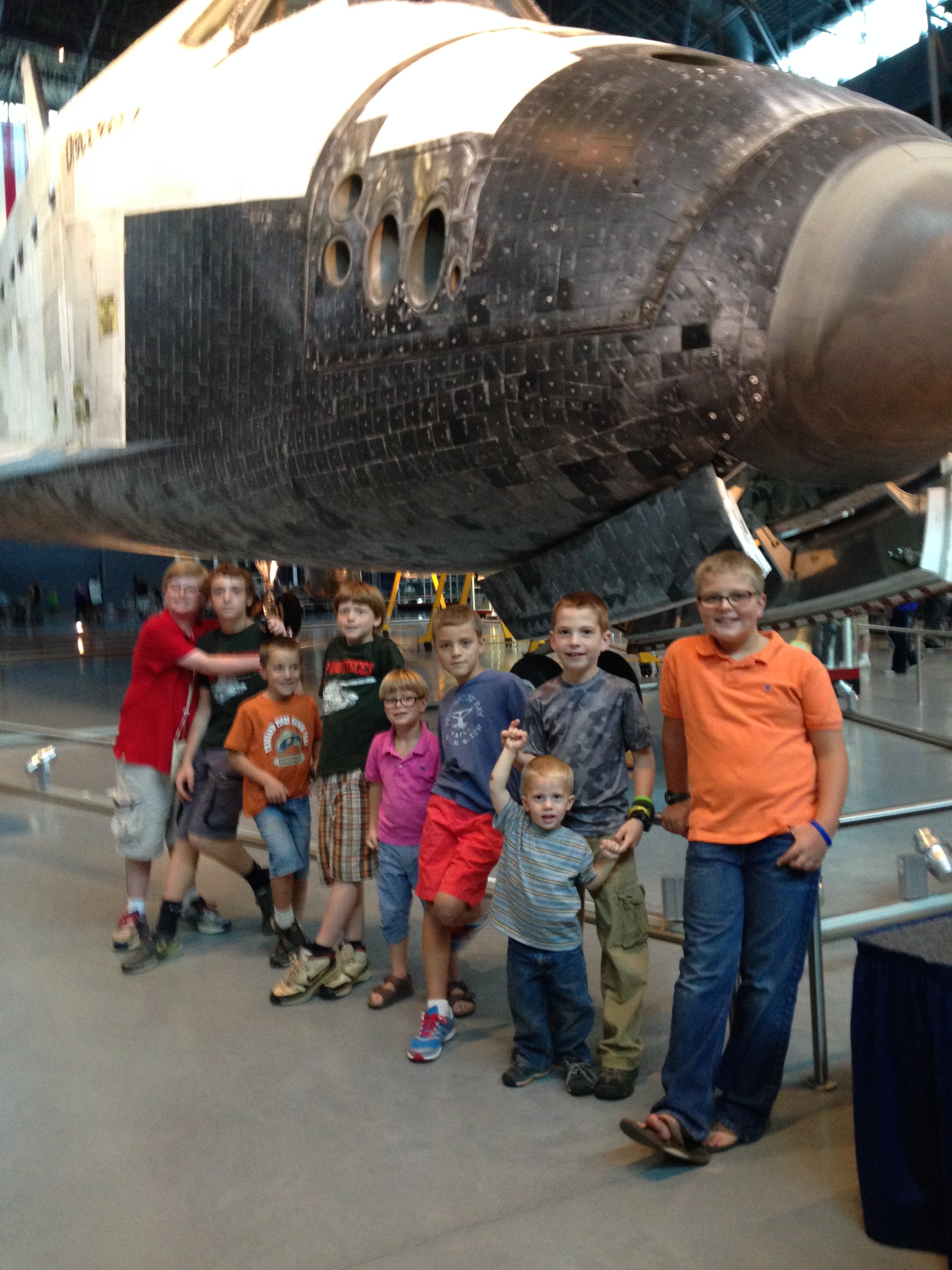 At the Air & Space Museum 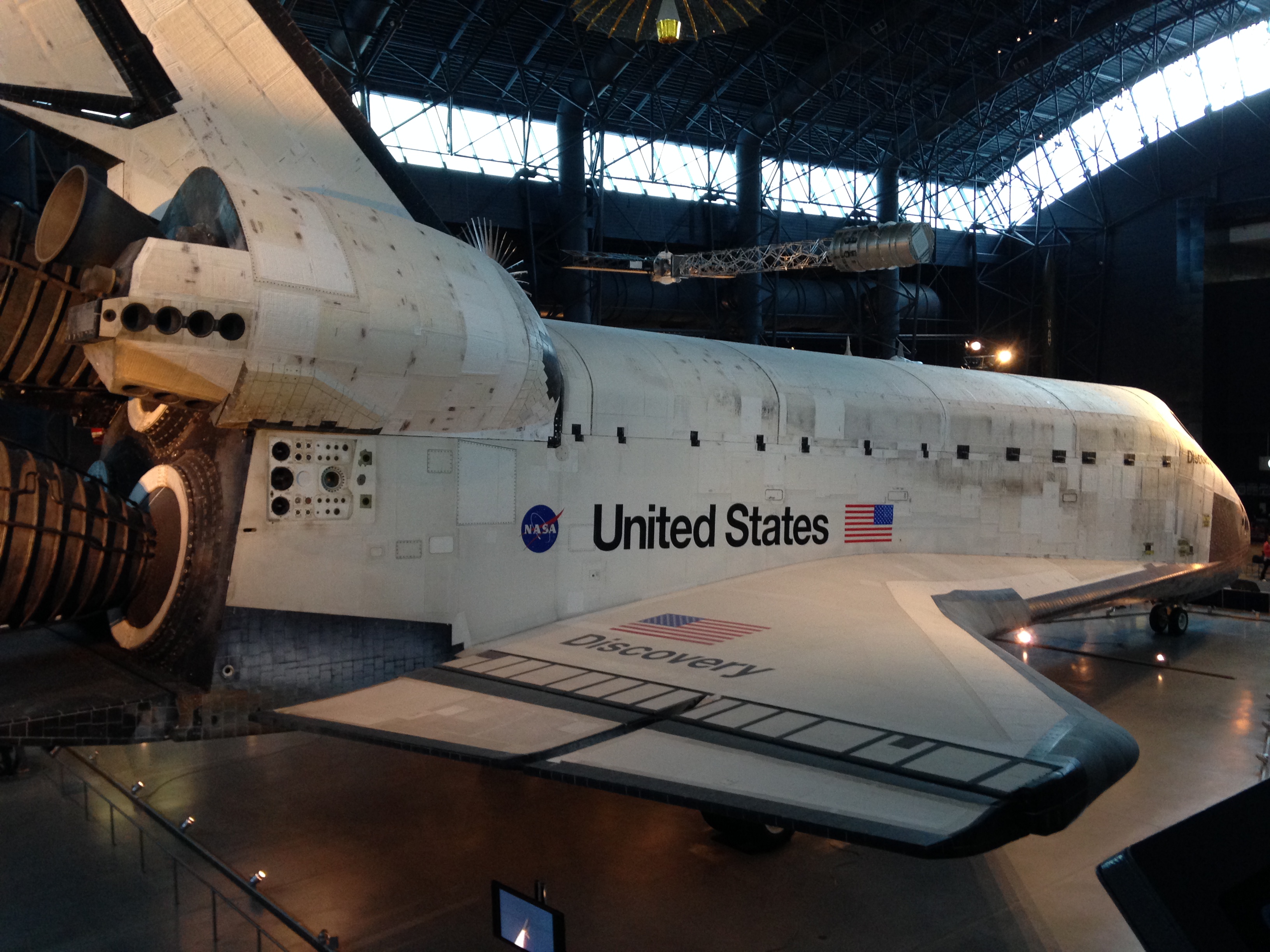 This is the space shuttle we watched launch & land it’s last time, we saw it fly in on the 747 to Dulles, and then we got to see it being pulled into the museum. 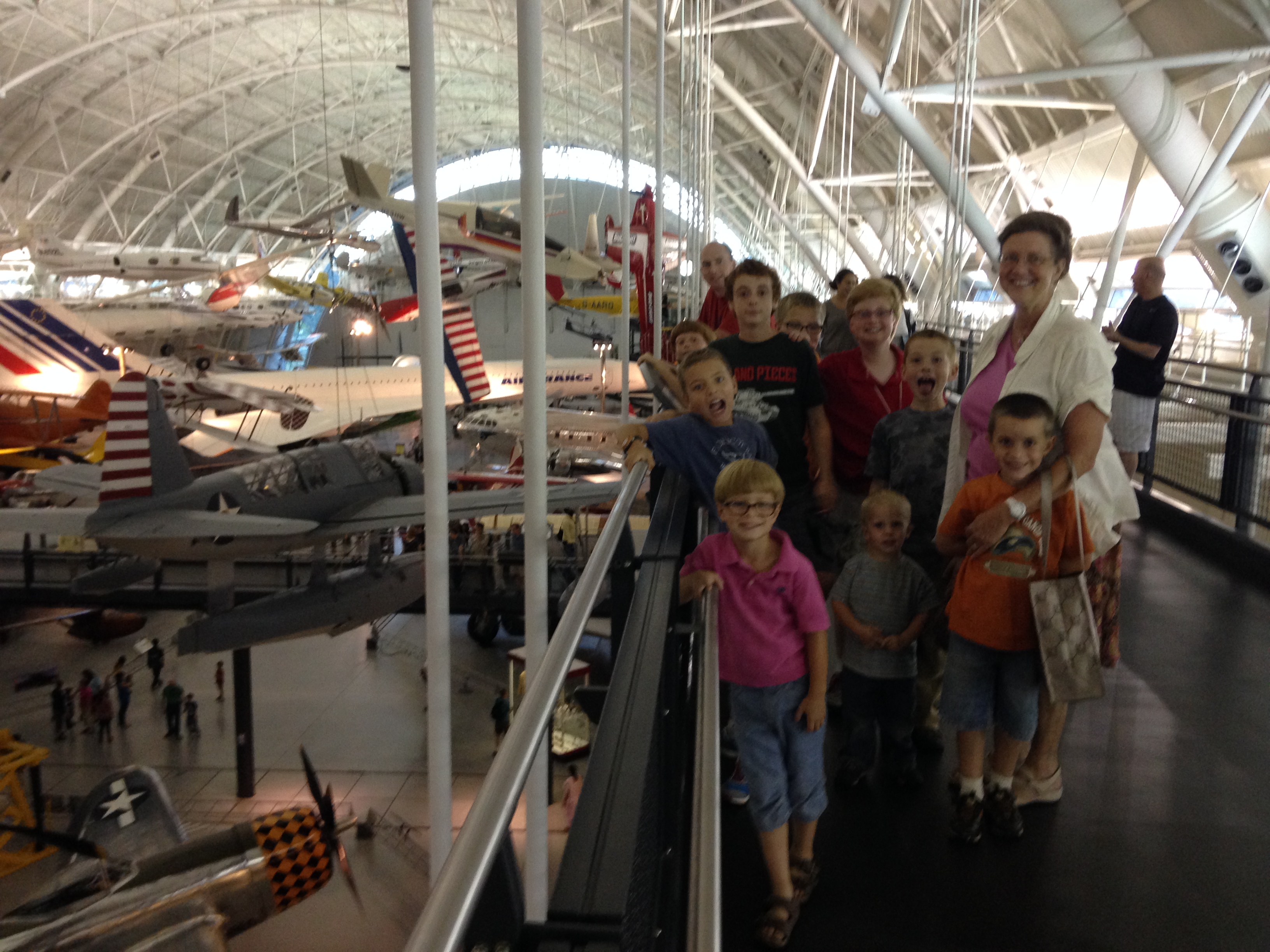 Up on the walkway 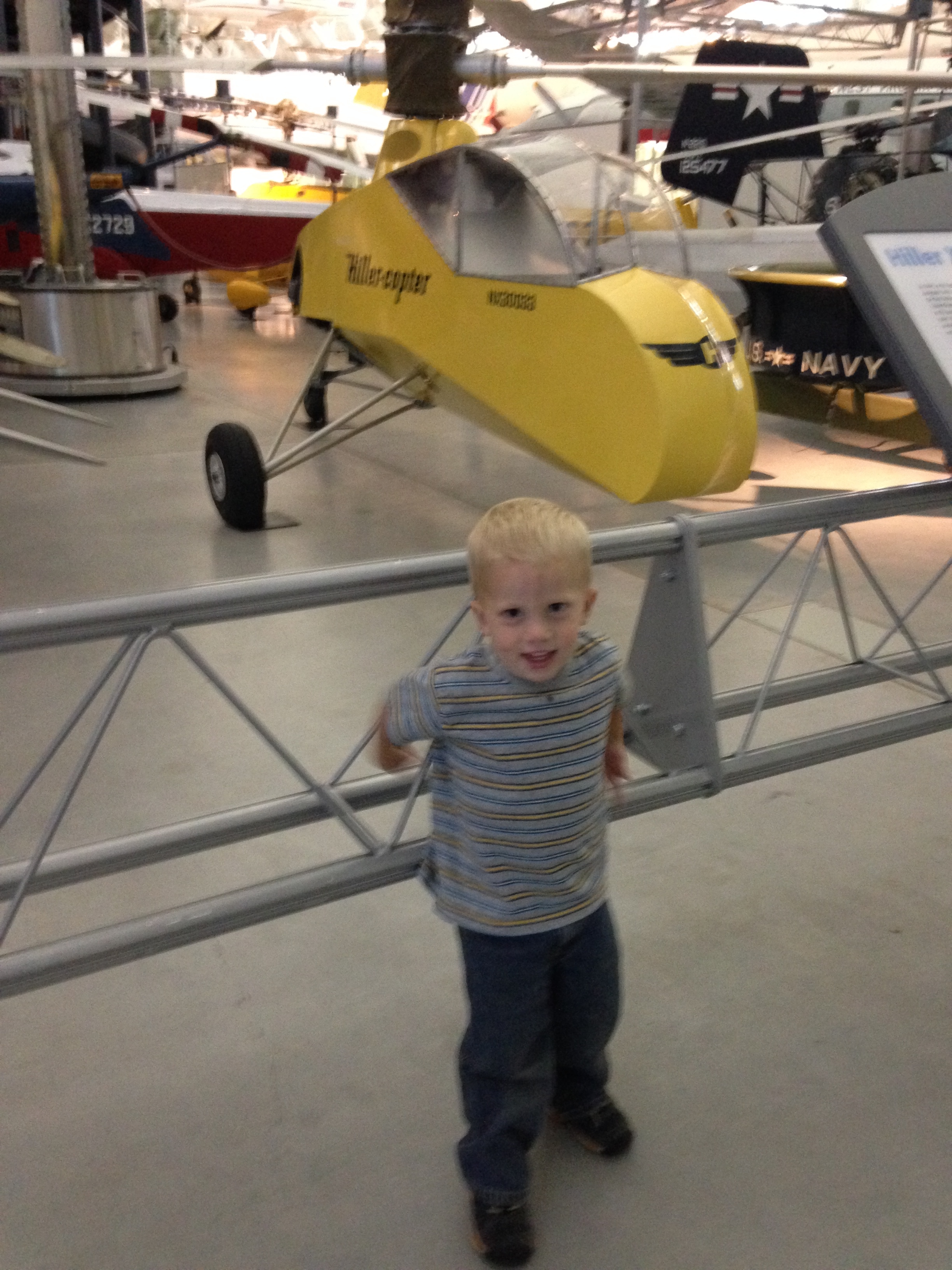 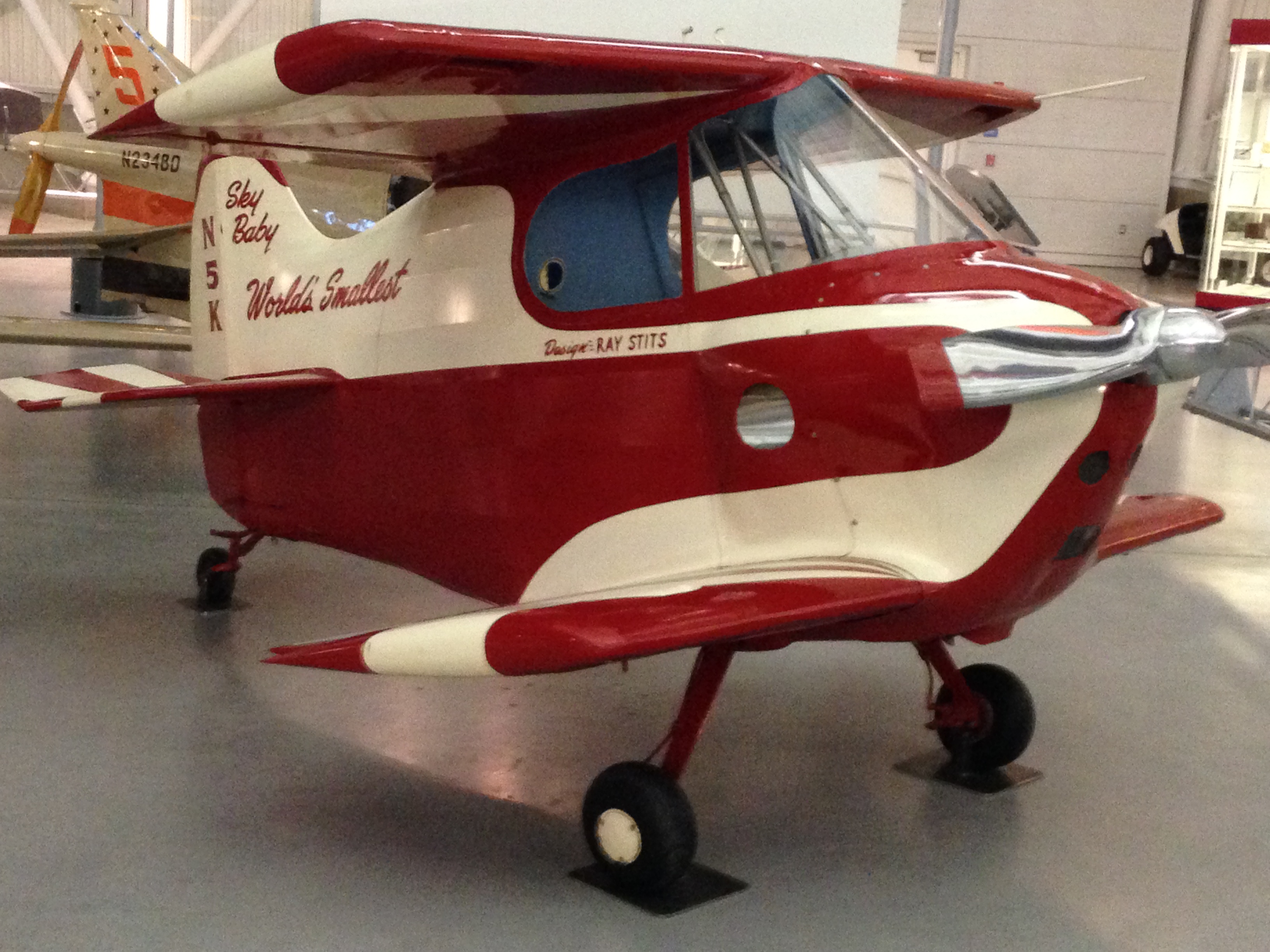 Another cute little plane. I think it might be the 2nd or 3rd smallest plane in the world. 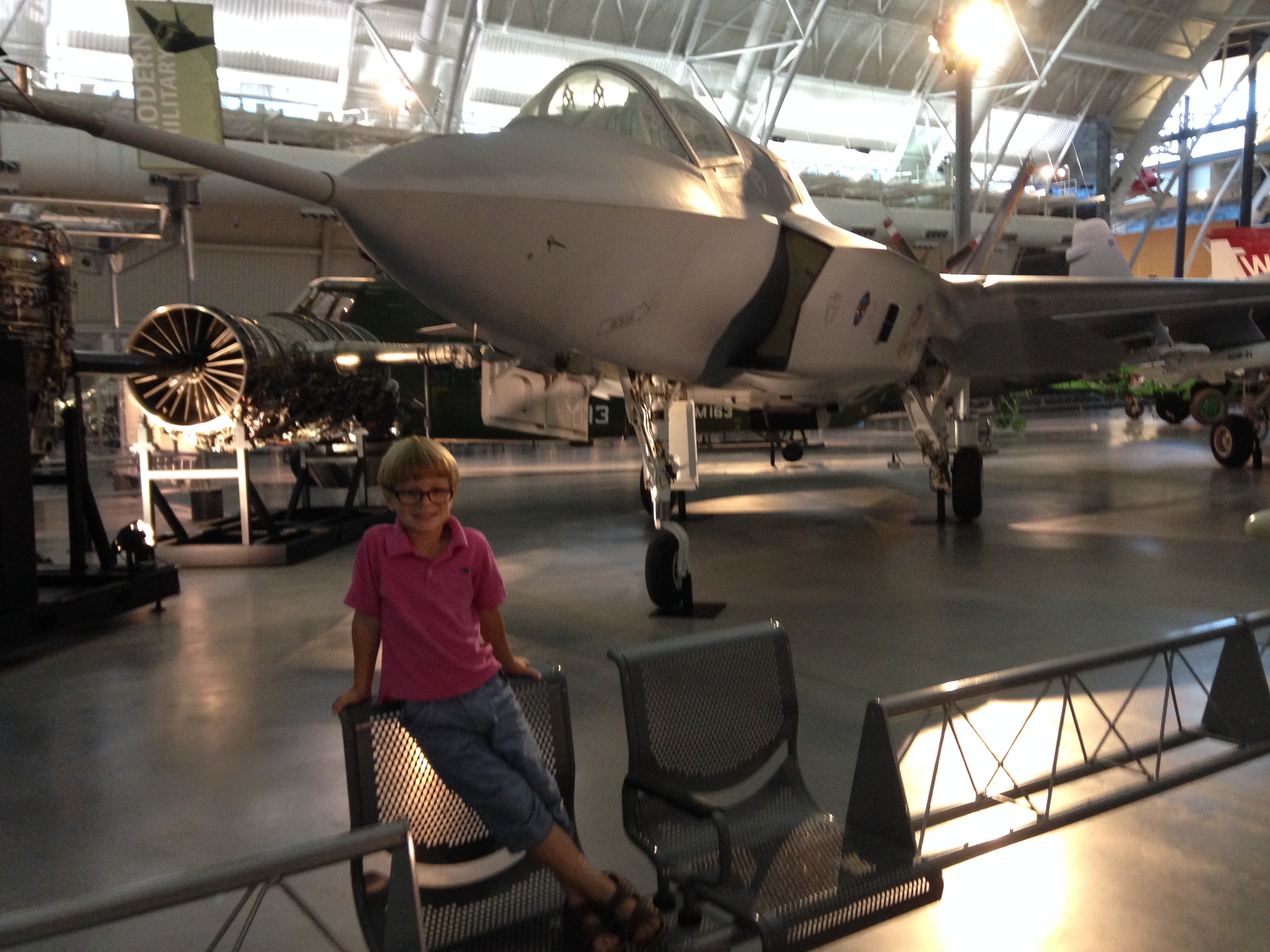 Another picture for Abby