We have been studying about George Washington in school so I have been thinking it would be fun to take the kids up to Mt. Vernon so they could picture where we were reading about. I mentioned it to Laura and she found that in Feb. they were having a Free Admission day so I decided we would try to make it up there and take advantage of the free day since it is $17 per adult and $14 per kid normal price. I mentioned it to a few others and it ended up Lorianne Stogsdill and her kids, Molly Patton and her boys, and Laura were going to join me. We were keeping an eye on the weather as we just had 16″+ of snow the other day. Tuesday looked like it should be a beautiful day (in the 50*’s). We were going to give it a try… Lorianne and I talked about our plans on Sunday while we were together, we double checked that all was on for a Free Admission day and all looked good.

Monday morning I woke up and saw I had a text from Laura saying she had gotten info mixed up and that the free day was actually Monday not Tuesday like we thought. I quickly Googled Free Admission day and it said Free Admission on Feb. 18. I think switched to another page to see their calendar. It didn’t say anything about Free Admission on Feb. 18 just Feb. 17. I quickly texted Lorianne and asked here where she had looked up info. She sent me the link of where she had seen the Free Admission for Feb. 18. I noticed in the link that is said 2013. OOOPS! Their  website had some outdated pages. BUMMER! It was too late by then to change or plans up and go Monday so us girls put our heads together and came up with Plan B. We decided that we would just go up to DC meeting in Springfield and riding the Metro in to the Smithsonian and go check out some museums. We planned on going to the American Indian Museum but heard from a few others that it was a neat building but a boring museum. So on to Plan C we would just go to other Smithsonian Museums. We were working out the final details when Molly mentioned that the forecast was calling for 1-2″ of snow on Monday night and that the farther North you go the more they were calling for. We decided that maybe it wasn’t the smartest thing for three of us ladies to be trying to use 95 with all the other commuters in the snow.

We decided to just meet at the Children’s Museum in Charlottesville around 10 and the go out for lunch. It was a good thing we decided to do that as it did snow at least 1-inch with some sleet during the night. We ended up meeting around 10:30am. after finally finding a place to park. Snow piles were taking up a lot of the parking spots down there. We spent 2 hours at the museum. The kids had a blast. 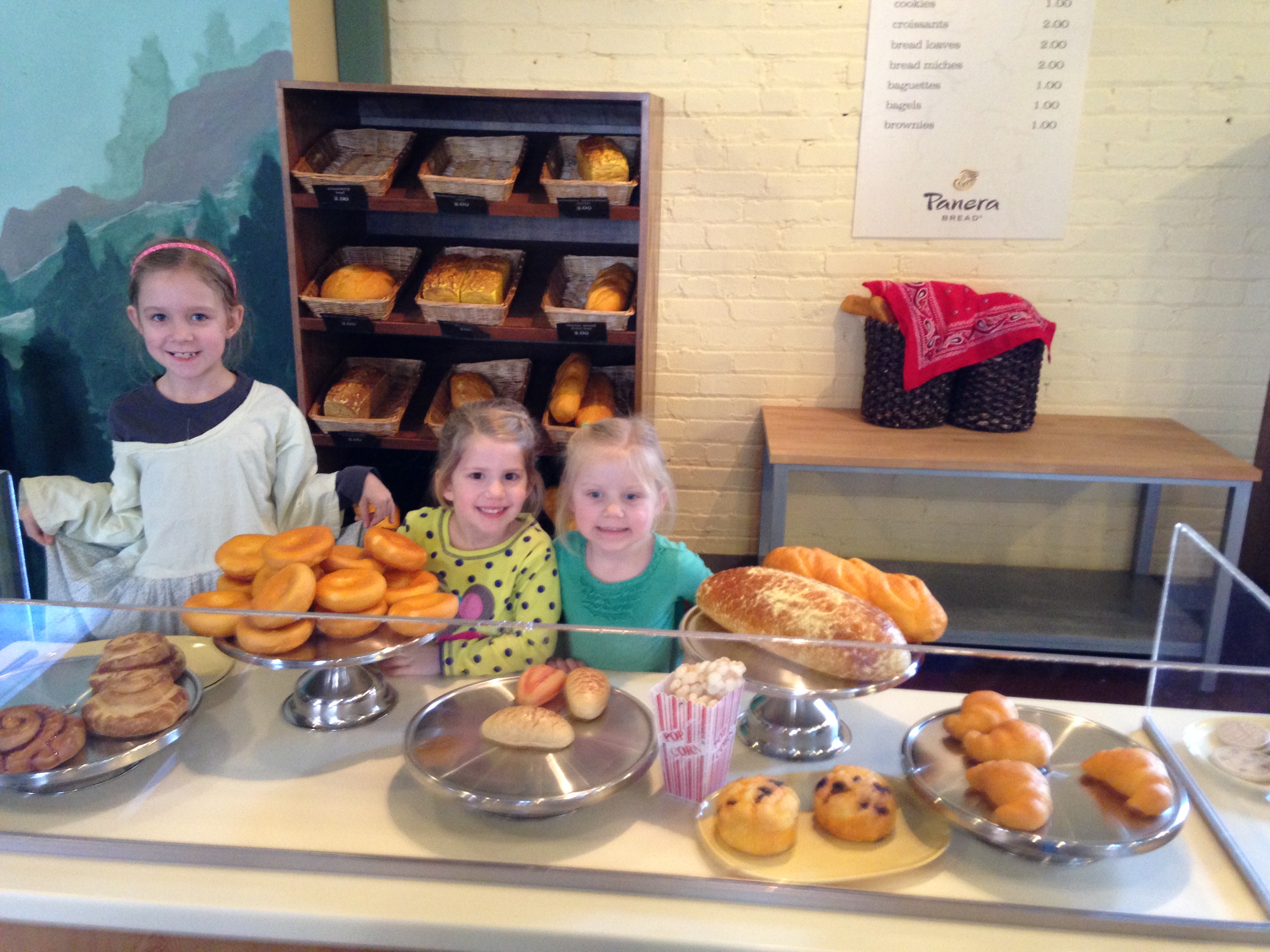 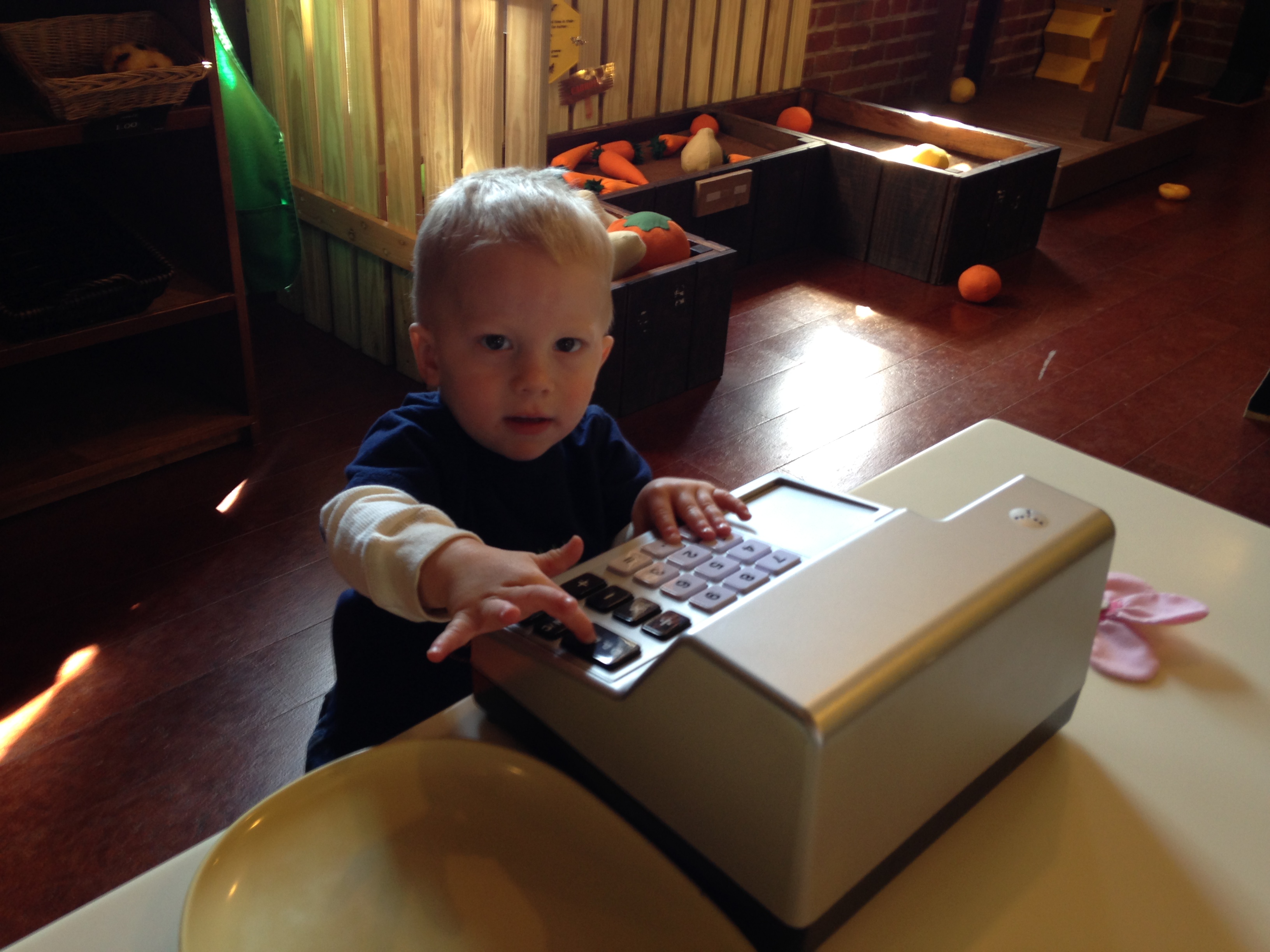 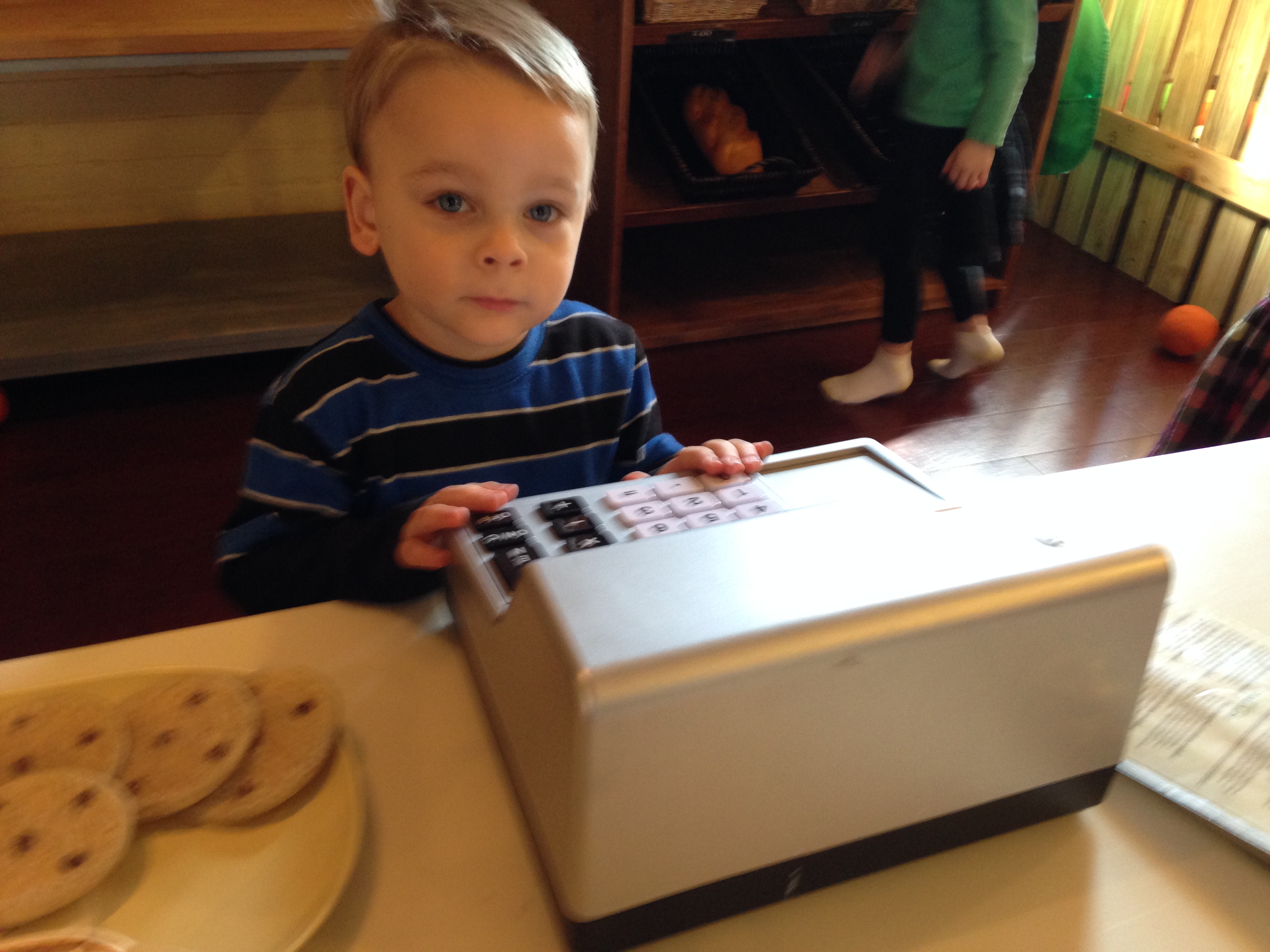 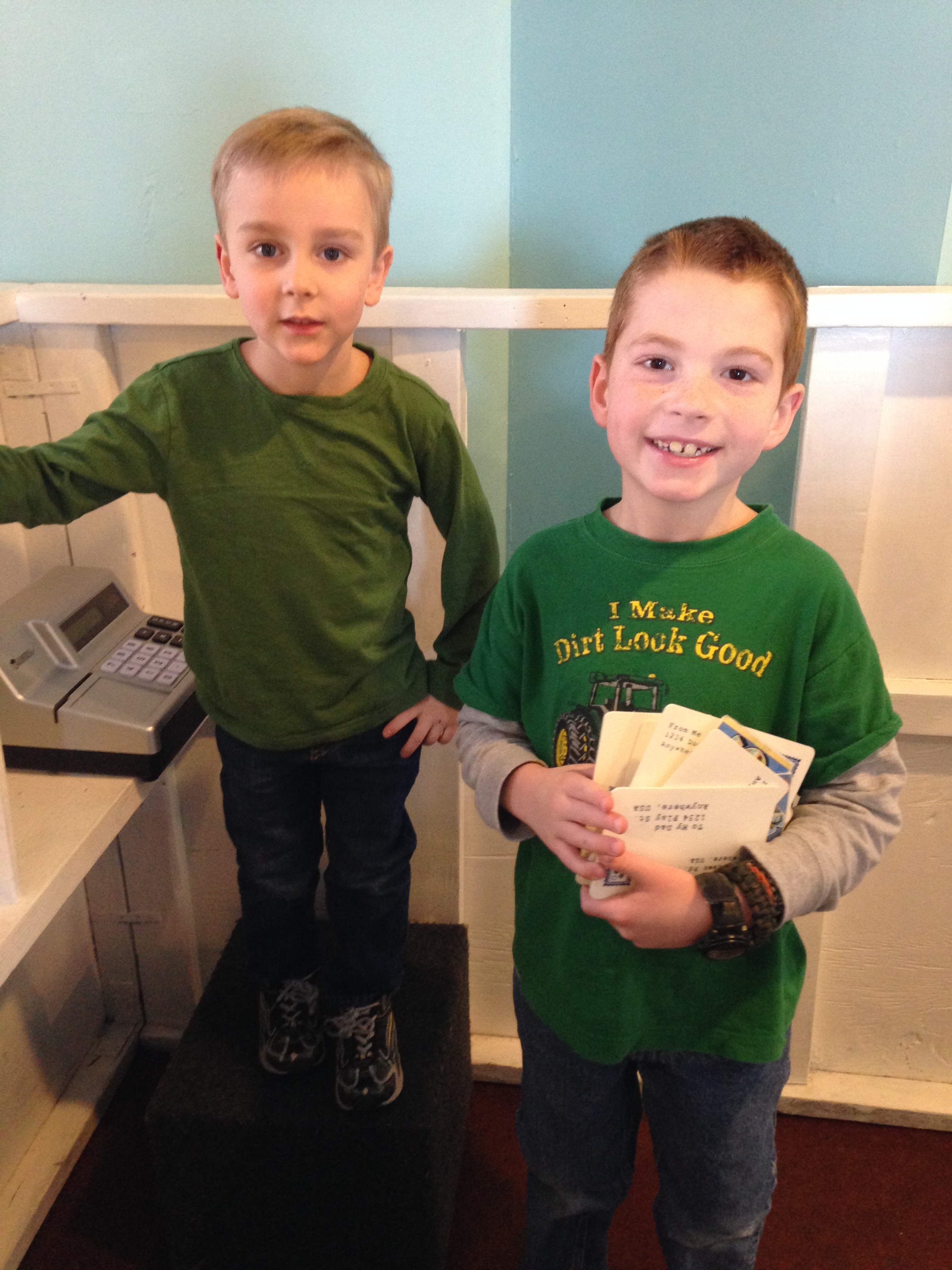 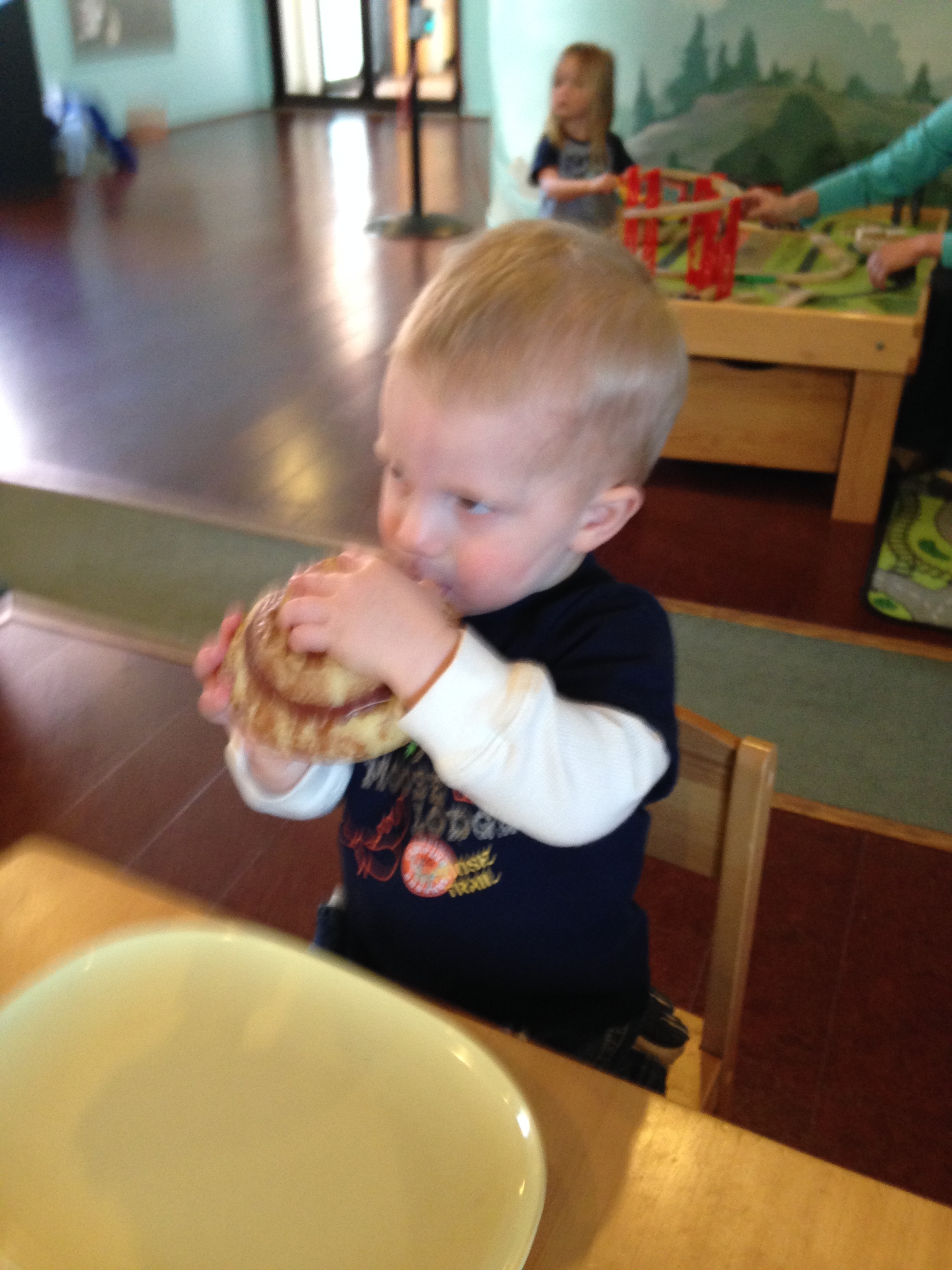 We headed out for lunch at McDonald’s after the museum. The kids were all excited to use their Free coupons there. I had bought each of our kids the Valentine Coupon packs so they had free hamburgers and milk enough to share with the other kids. After they had all eaten their lunch we used our free ice cream cone coupons and had ice cream. While we were sitting there eating a lady and her grandson came over and wanted to give the kids Lego cups that they were selling there at McDonald’s. She had bought 4 of them and brought them over. When she realized there were a lot more than 4 kids she said that she would be right back with more. She went and bought the rest of the kids cups. It was really sweet of the lady. The kids were all thrilled. She told us that you don’t argue when God tells you to do something. After we finished up eating we went our separate ways.

I decided to take the kids over to Brown’s Honda because “Buckets” from the Harlem Globetrotters was there showing kids basketball tricks from 2:30-3:30pm. We got there about 2:45 pm. I didn’t see any signs of anything exciting going on. I called Chester to make sure it was for sure happening. He said he would just go in and see what was going on. Cooper wasn’t excited at all about going in, I felt a little funny walking into a dealership with 4 kids in tow when I wasn’t interested in buying anything, the other kids were tired and they almost talked me out of going in but I finally decided that since we were there we might as well go on in. We walked in and it seemed we made the people’s day as they didn’t have anyone there for their event. Buckets showed us some tricks. He helped Bryant and I spin a basketball on our finger. He gave Kolby an autographed basketball. Kolby was thrilled with it. Kolby entertained the NewsPlex lady by dribbling the ball around and throwing it at us. All was good until he decided his basketball goal was the glass cubicle partition. Thankfully he didn’t break anything but sure made a racket and scared me. Bryant asked Buckets to show him a few more tricks before we left. While we were watching the tricks a lady from Brown’s came over and gave us 6 tickets to go watch the Harlem Globetrotters here in Charlottesville for March 13. Wow! What a surprise! Chester had jokingly told me that they were giving you two free tickets if you test drove a car. We finished up watching Buckets and then headed to the library. The kids had a hay day picking out books. We read some books there before heading home with our mountains of books. 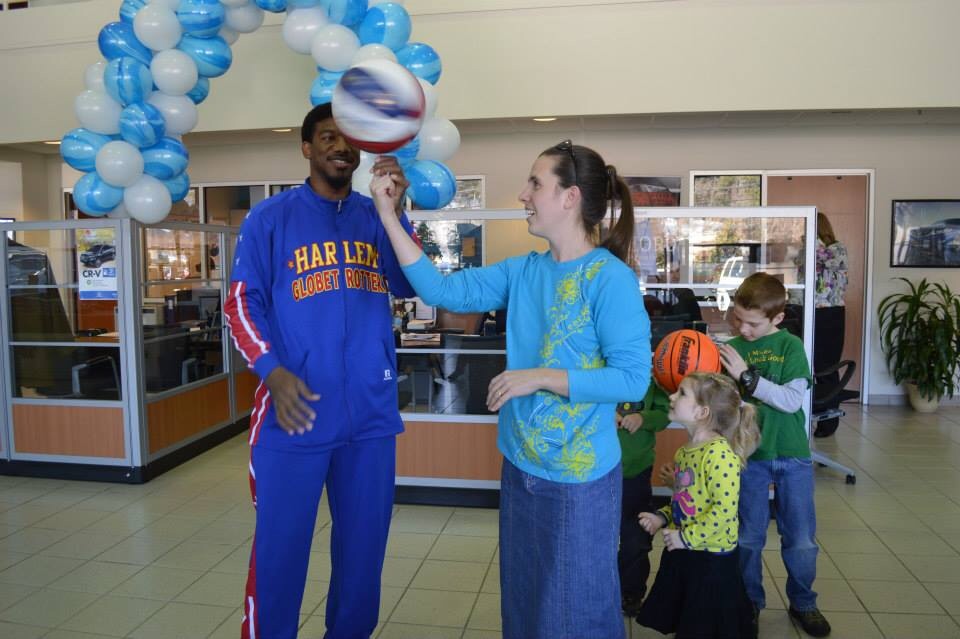 Giving the ball spin a try. 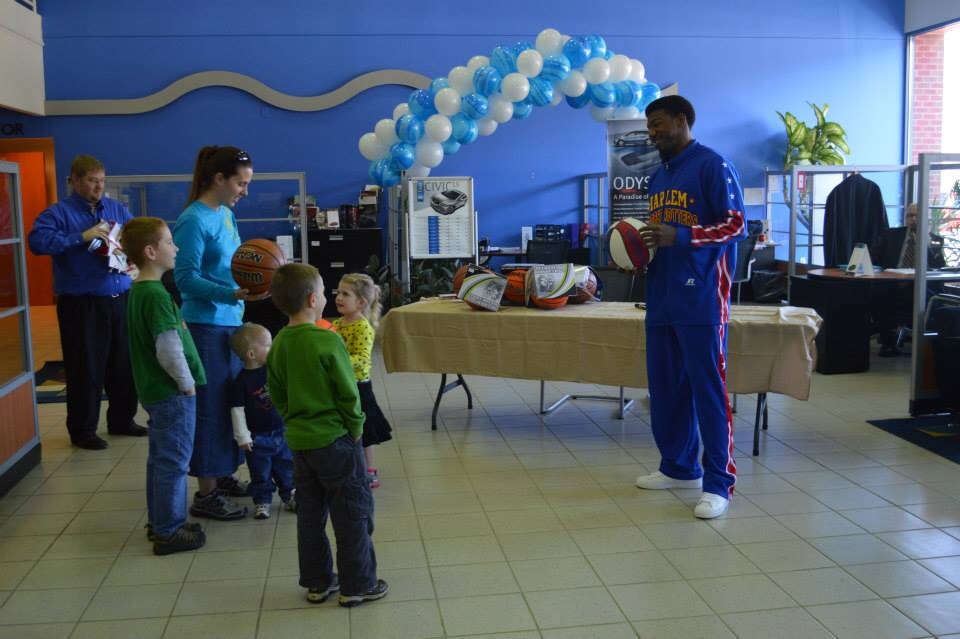 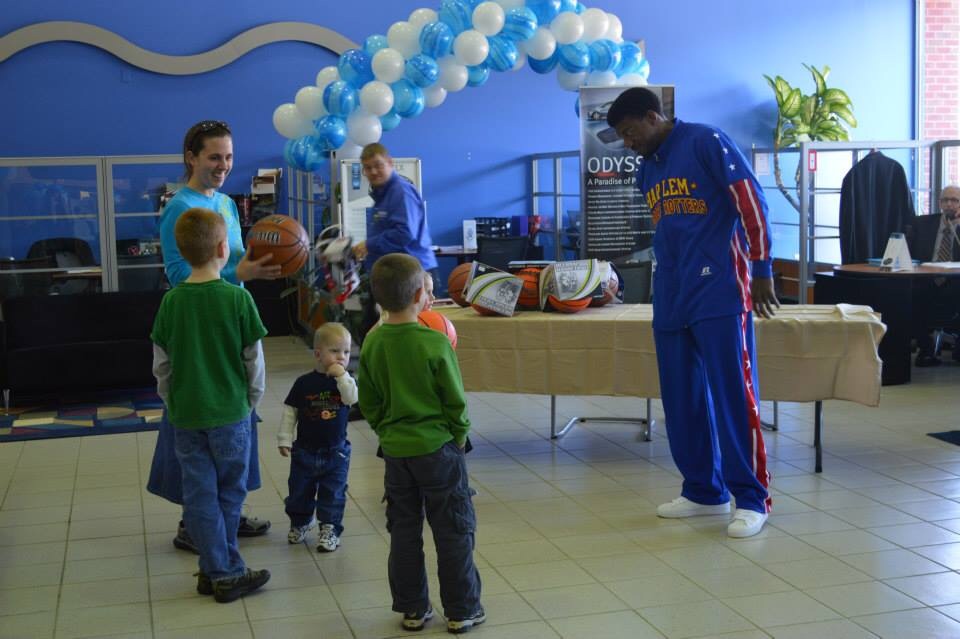 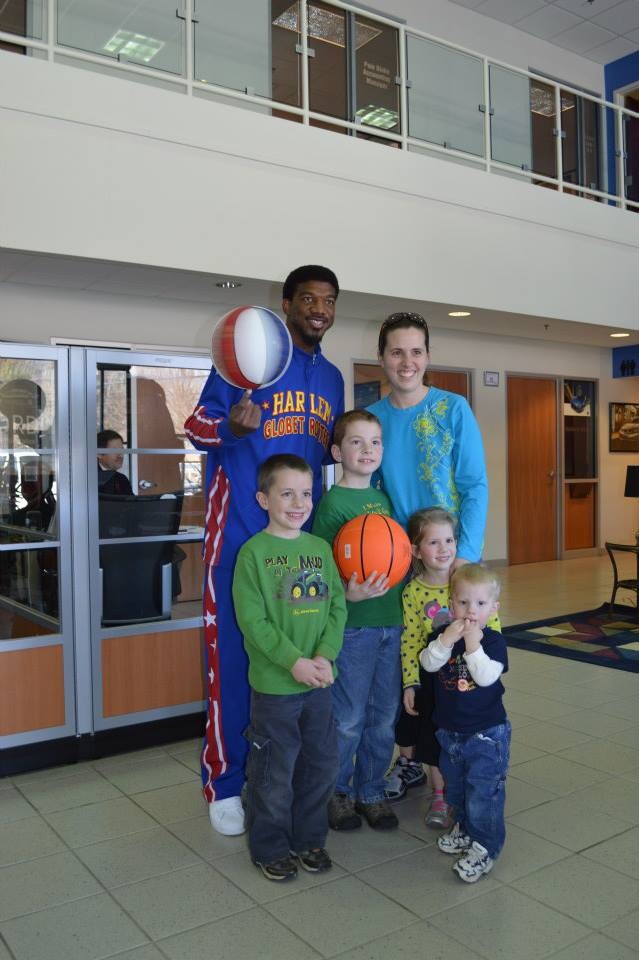 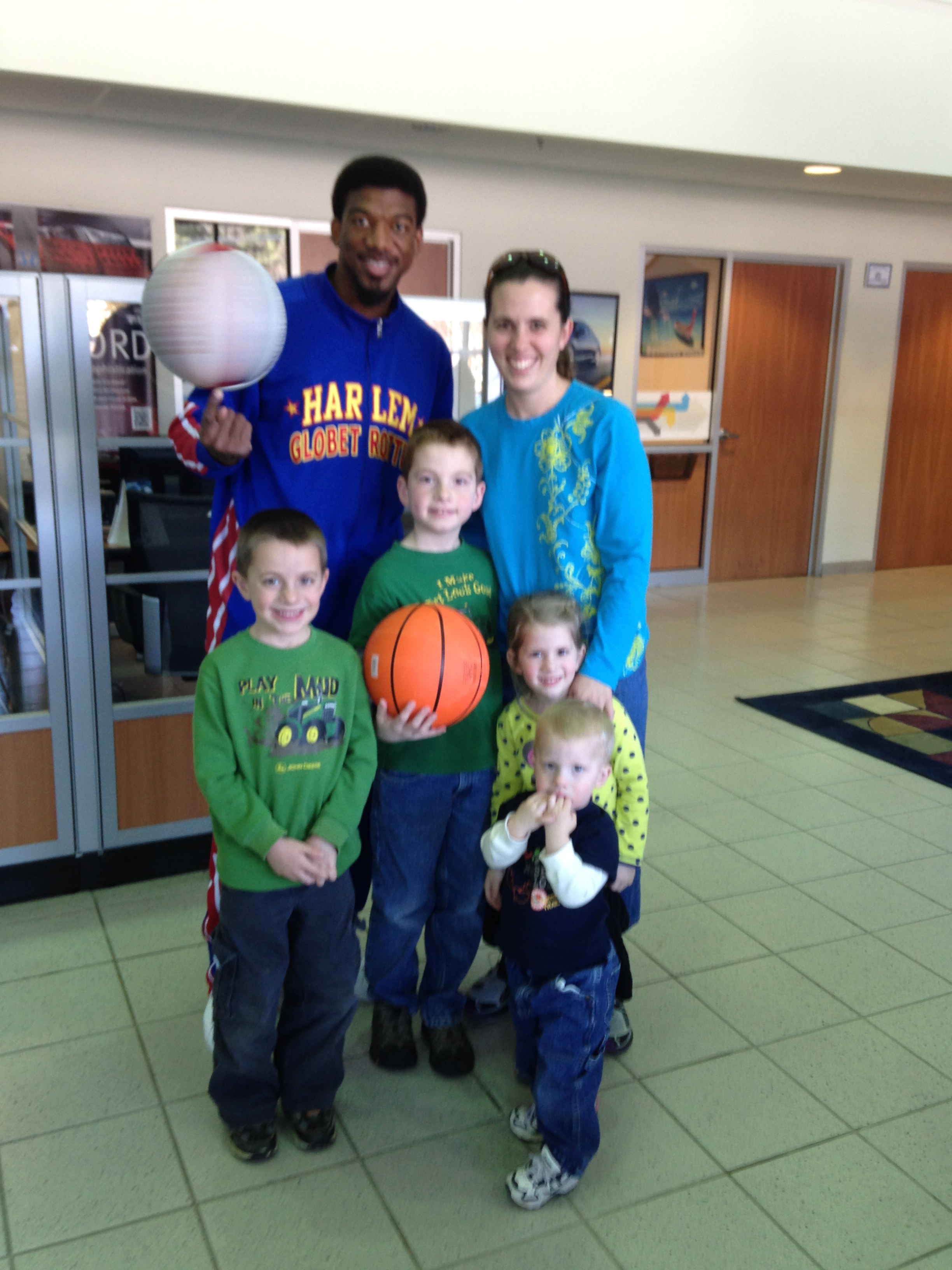 Buckets had the ball spinning on his finger the whole time we were taking pictures. 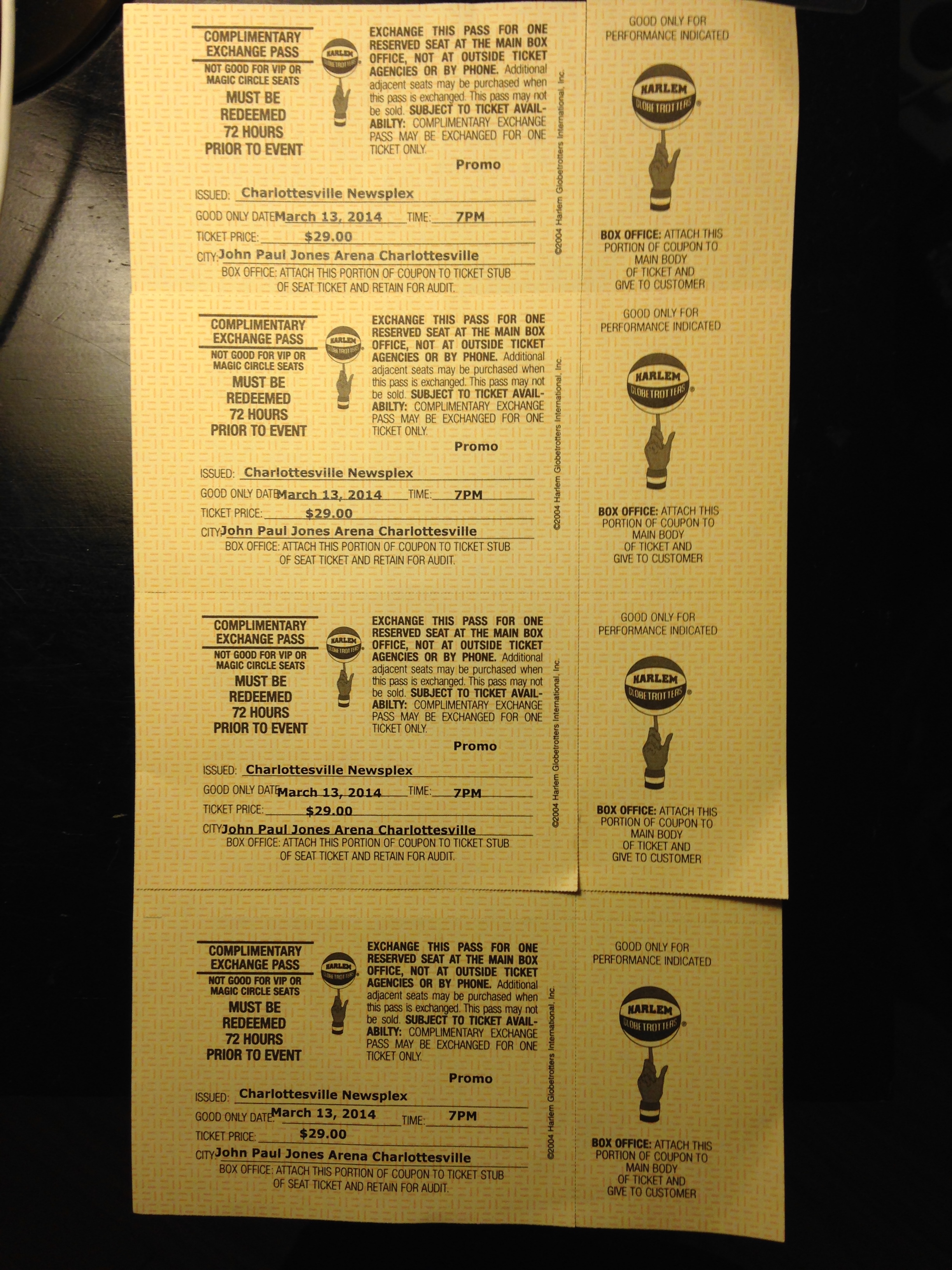 Our score of the day: 6 free tickets to watch the Harlem Globetrotters. Cooper did the math and figured up they are worth $174. Good math work, bud!

We arrived home with 4 tired kiddos and 1 tired mommy. What a fun day out! We would like to start doing a Mom and kids day once a month for field trips, trips to the library, park, etc. Looking forward to it. We finished up school for the day and had dinner then Chester and the boys went to a CERT meeting with Bobby. I did dishes and cleaned up the house before putting the Kaylin and Kolby to bed at 9. They were exhausted and were sacked out with in minutes. I headed down and finished up getting my consignment stuff ready for HWGA.

2 thoughts on “Feb. Day Out With Mom”