Kalyin was able to hold baby Jaden (Russell and Emily Cotten’s baby) one Sunday after meeting. She was pretty thrilled.  Nov. 10 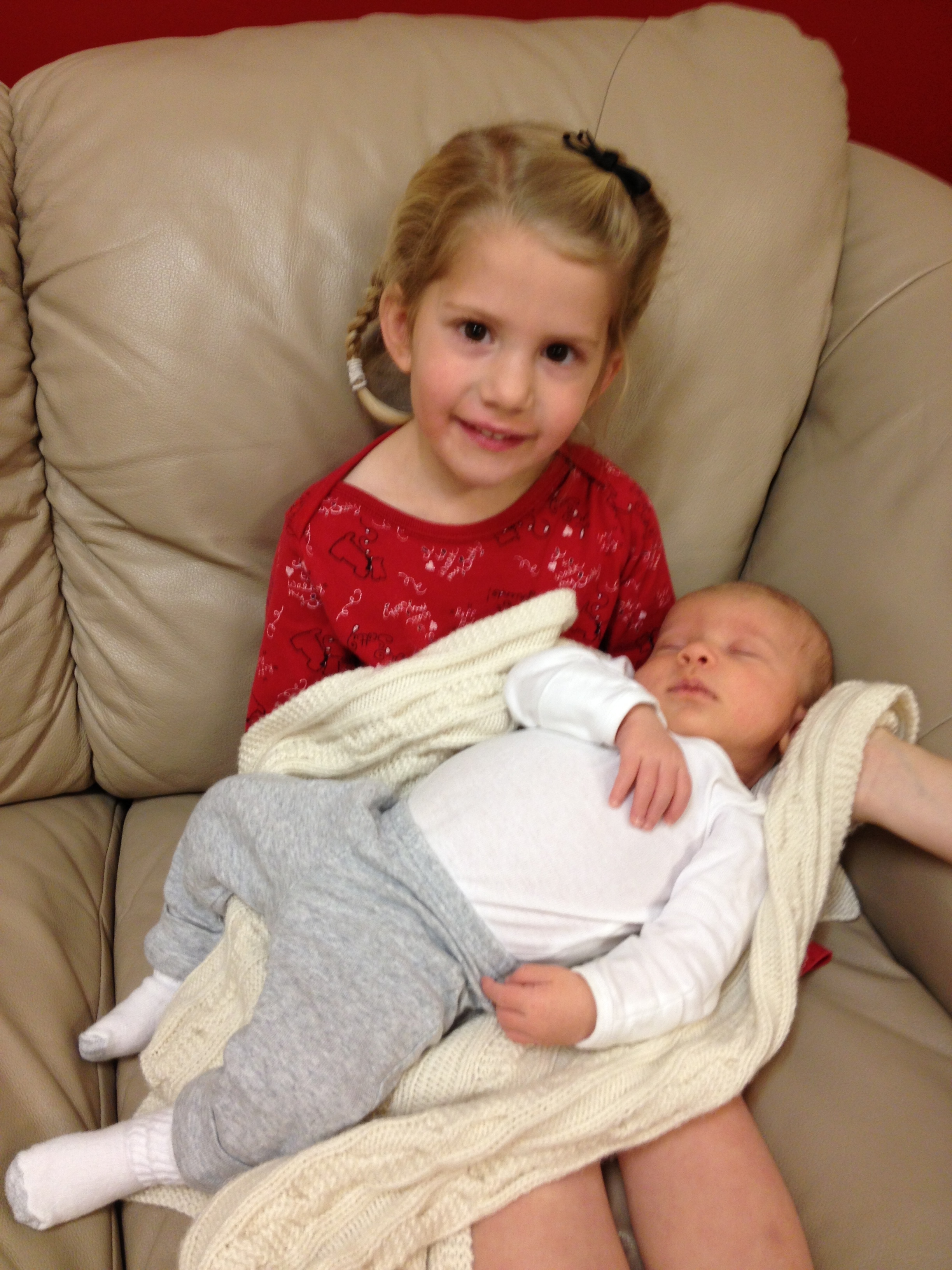 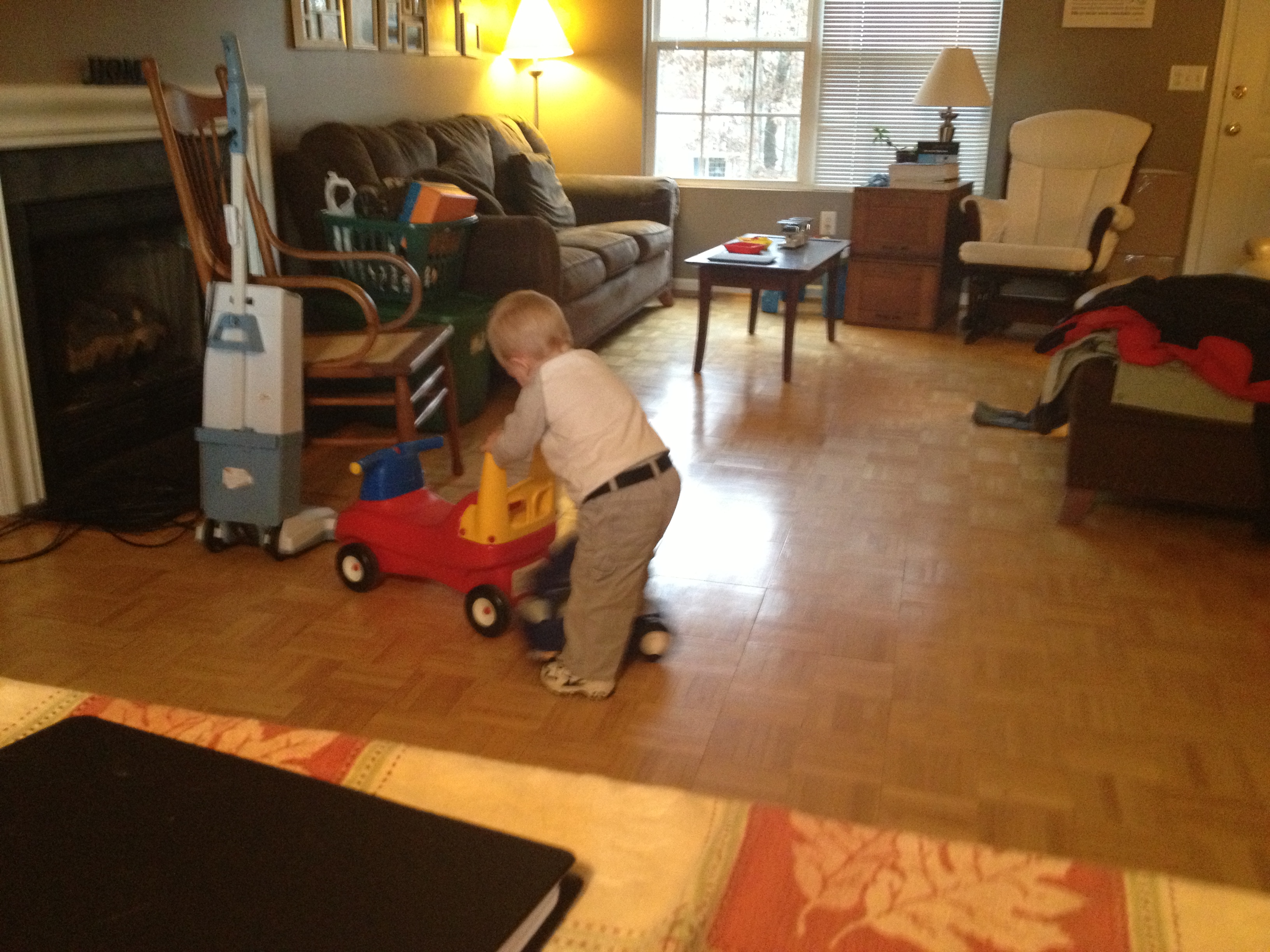 Kolby riding on his semi like a skate board. 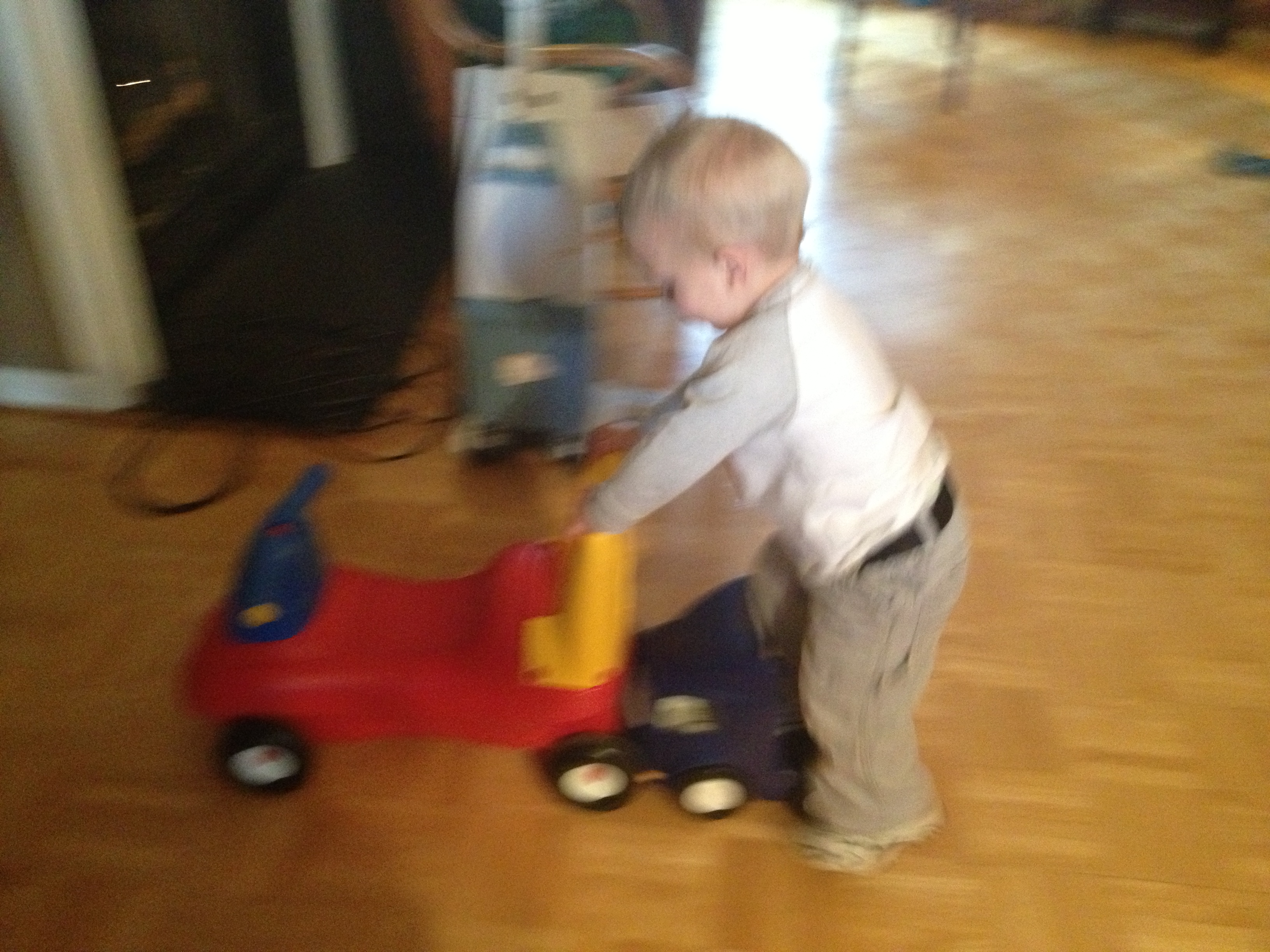 This was a boat that Cooper and Bryant designed. I like the cotton ball “smoke” coming out of the gun. Nov. 15 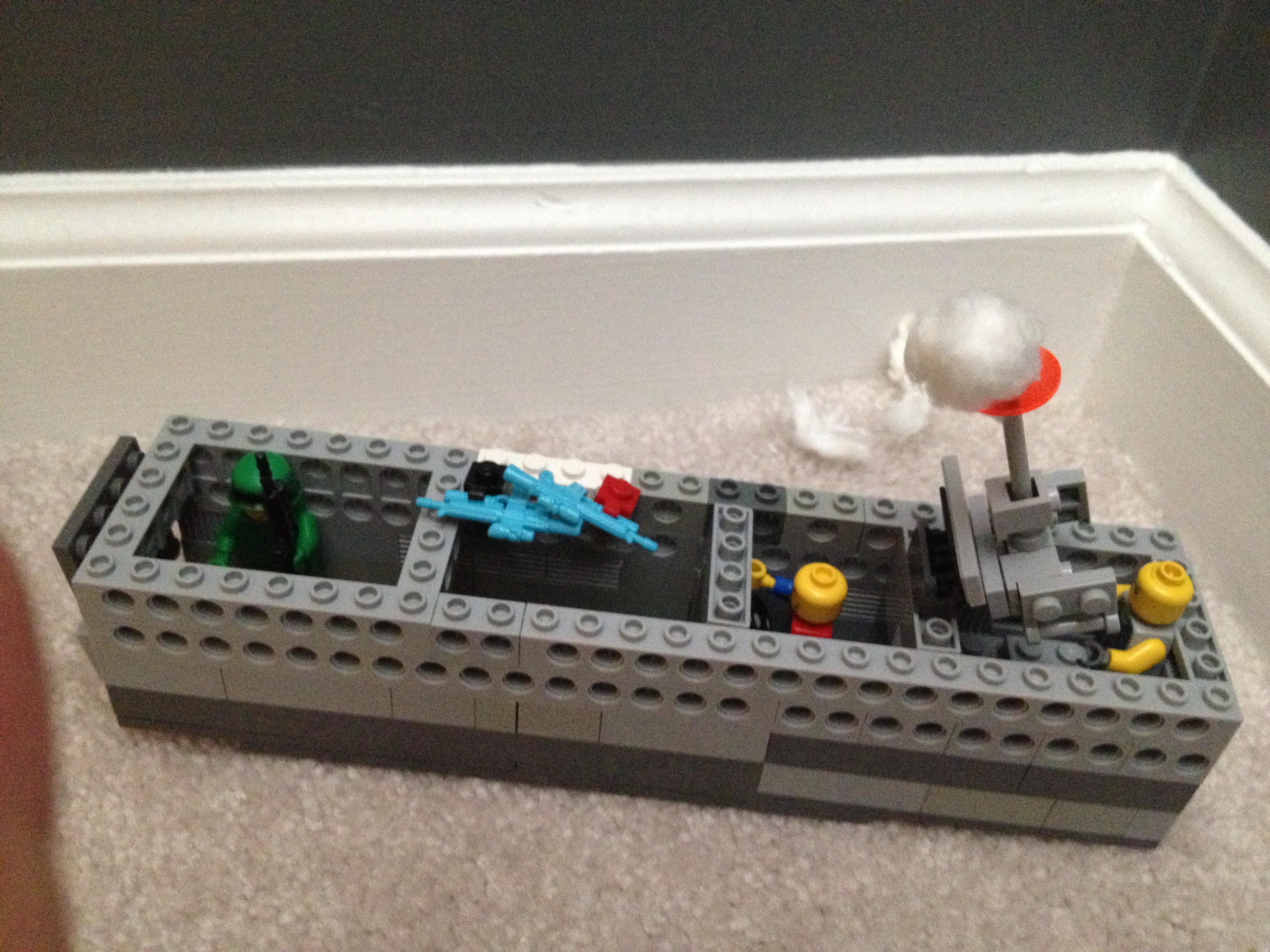 Cooper’s boat he and Bryant designed 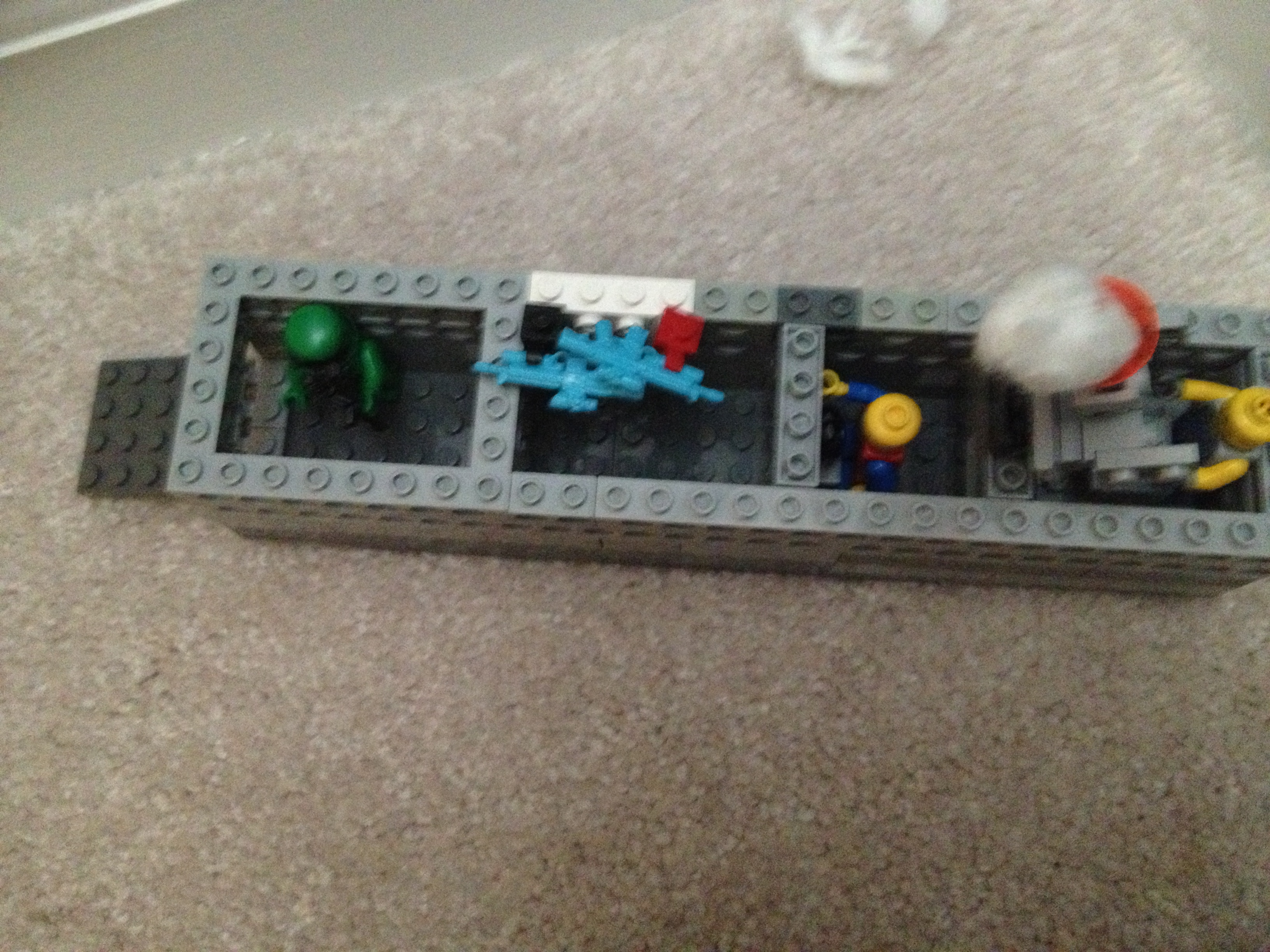 They make some pretty neat things!

Laura bought this chocolate for me while she was in NFLD. I had no idea there was anything “Heidi” brand. I thought this was pretty “sweet”. 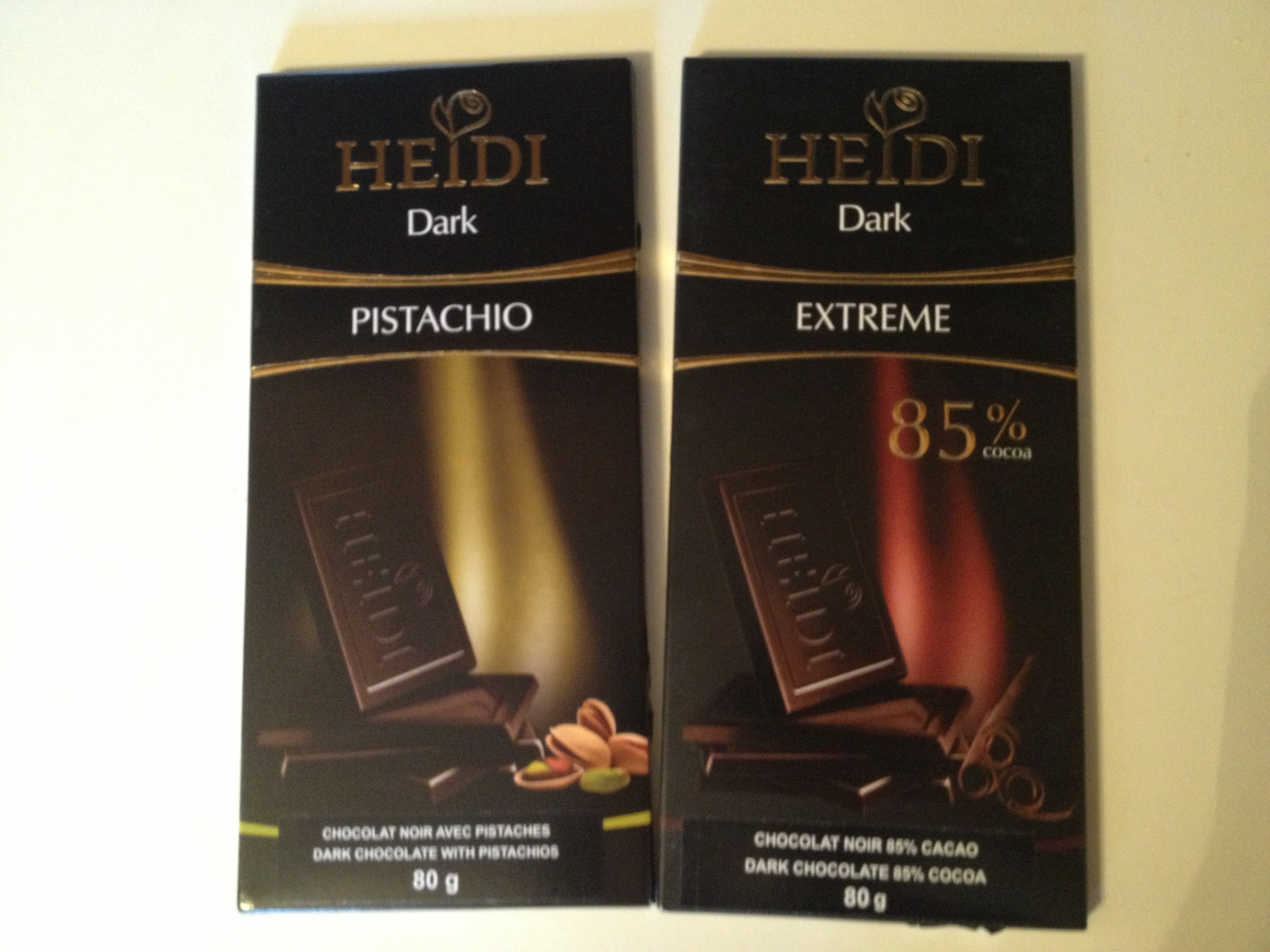 Kolby is forever loosing his golf balls, bouncy balls, ping pong balls, or any other kind of little ball he can get his hands on, under the couch, chairs, or hutch. He is so funny trying to fish them out. Sometimes he lays down and tries to reach them, if that doesn’t work he goes and grabs a broom and tries to get it out that way, if that fails to work he  will slide his legs and feet under and try to reach the ball with his feet. He doesn’t give up very easily. Nov. 20 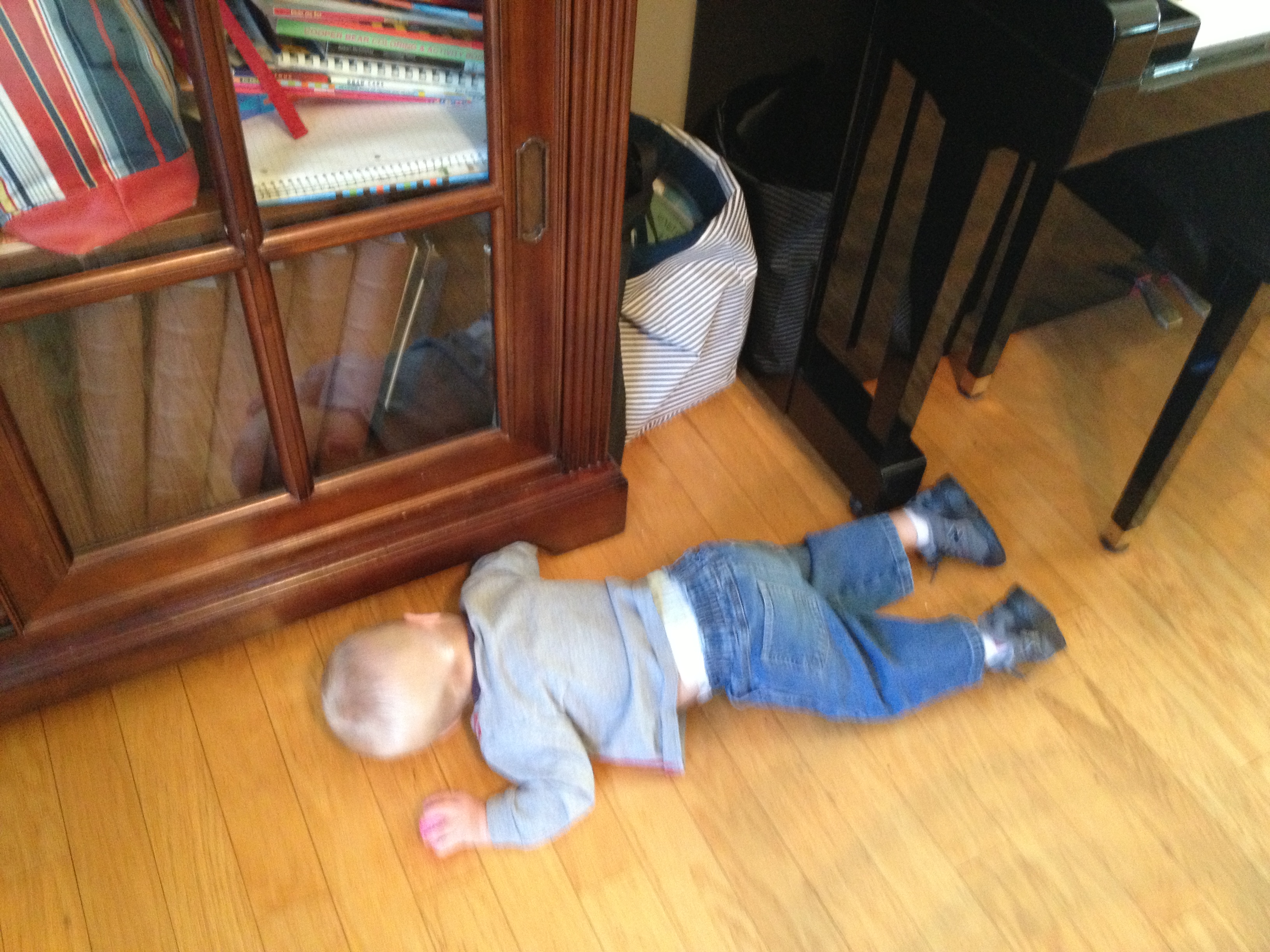 Kolby fishing out his lost balls.

I’m not quite sure why you can’t eat a burrito all roll up like “normal”. For some reason Kolby eats a little of his burritos the correct way then lays it down and unwraps it and digs in with his spoon or hands, whichever is more convenient at the time. Nov. 21 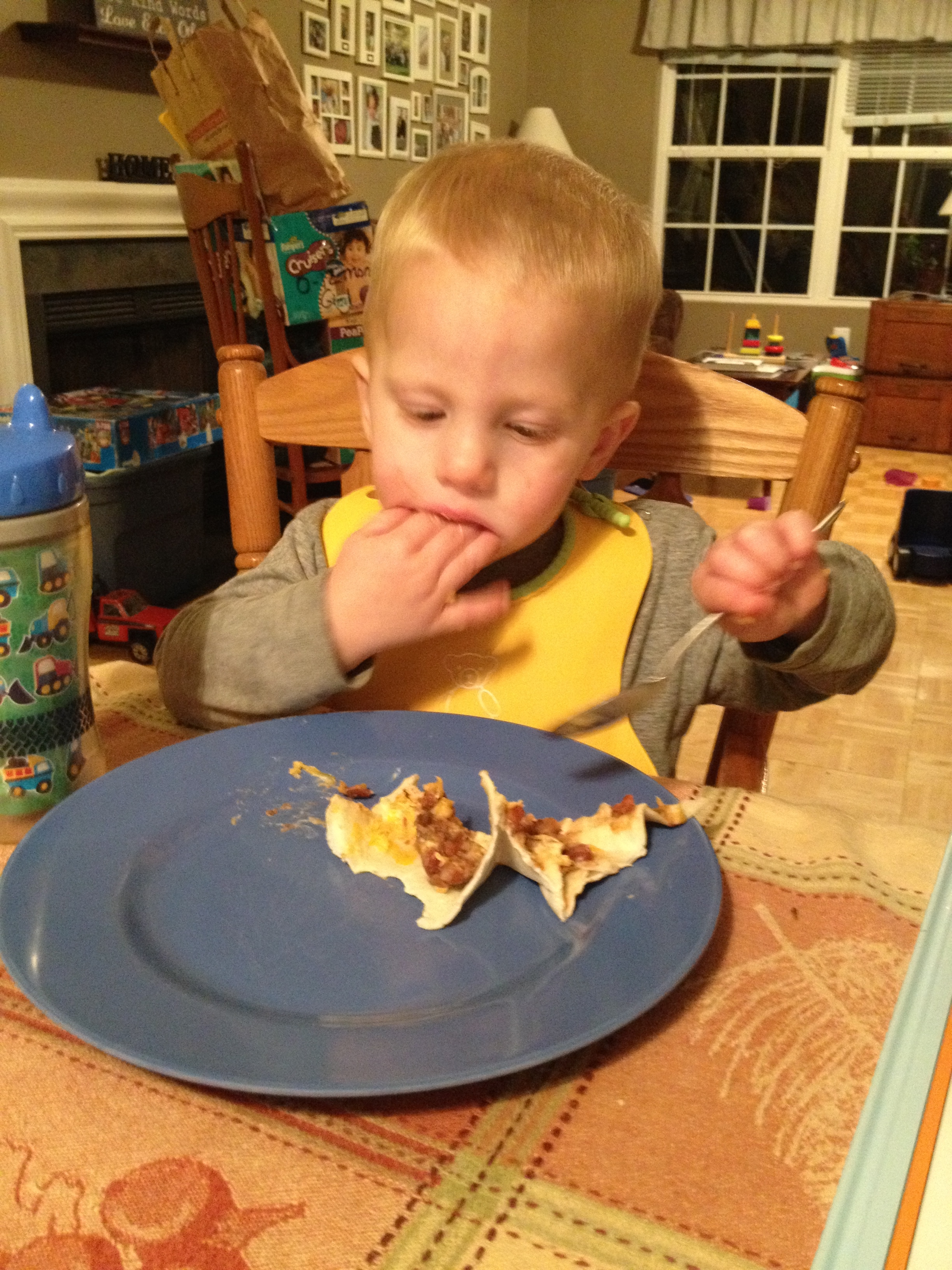 Not sure why you can’t eat a burrito rolled up…

Bryant and I worked together on my front flower beds after I hit Lowe’s 75% off sale on their plants. I have been wanting to redo the flower bed but didn’t want to take the time or money. I had saved my birthday money for when i was ready and when I saw plants on sale for 75% off I knew the time had come. I bought 3 Shrubs (I can’t remember their names), 2 boxwoods, and 4 Mums for under $20. Bryant and I dug out the 2 rose bushes, the lilac bush, all the irises, and all the glads. We replanted all the plants except the Glads which we gave to Joni Cotten. We put compost on the bed and then I tilled and tilled it. The ground was so hard since it hadn’t been tilled in almost 10 years. Then I planted the shrubs and mums in the front left flower bed and the 2 boxwoods went over on the right front flower bed where 2 of our other boxwoods had died. Thanks for all the hep Bryant. It looks so much nicer. We plan to add some ornamental grass in the spring. Nov. 22 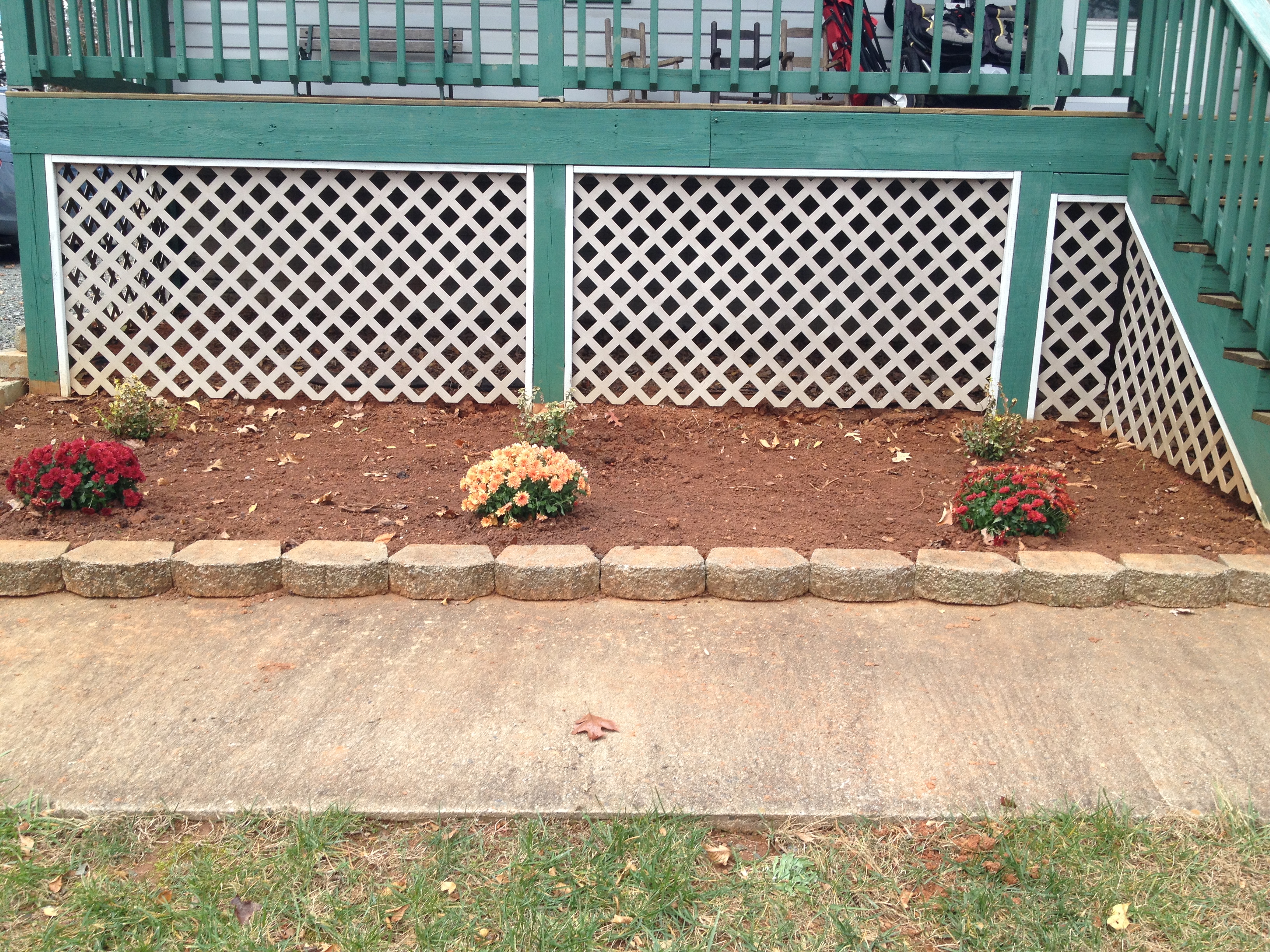 I am trying to get into couponing a little more and this was my first real SCORE! I was pretty tickled with this deal. Hopefully I can keep finding deals like this. I’m not very efficient at it yet but am having fun practicing. I got these at Food Lion for a total of 15 cents. 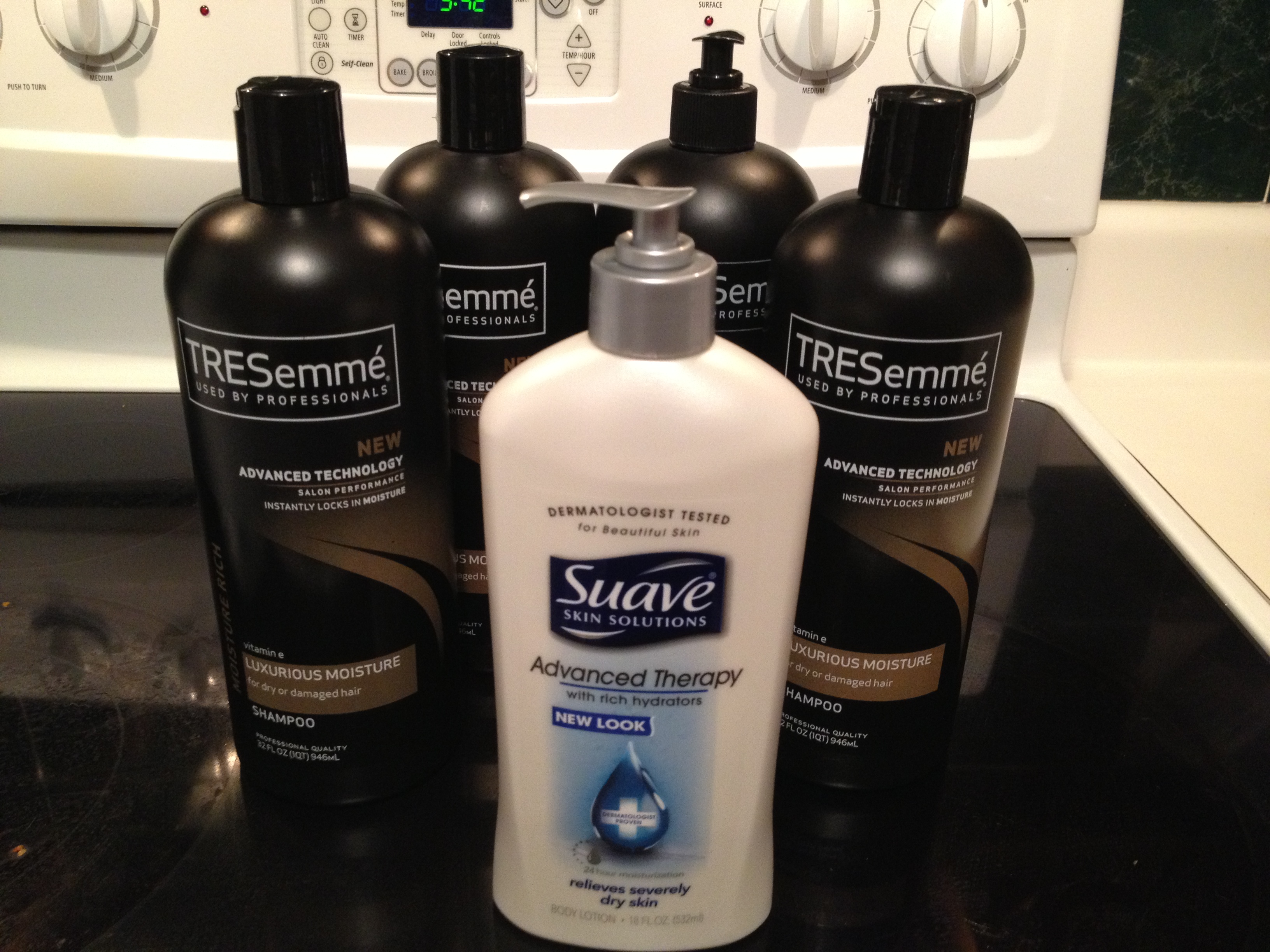 I don’t have a picture of this but want to remember it later when Kolby is grown up and kisses from Dad and Mom really aren’t cool. Kolby is our only kid that thinks that kisses heal EVERYTHING. Kaylin believes that Band-Aids heal any hurt but Kolby likes kisses. If he gets hurt he will come to us and in his grunting no talking way and let us know that he got hurt. I like to ask him if he needs a kiss. He always replies, “huh”, meaning yes. I’ll give him a kiss and immediately all his problems are solved and he will go back to playing. It is SUPER cute and never fails to make me smile! I love those little moments.

Also another thing I will put in here for November is on the 15th, Chester went and played basket ball with the guys in Orange. The kids ended up not getting their jobs done in time to go so they stayed home with me while I planned school and did stuff around the house. I was busy getting the kids in bed and finishing up grading papers when Chester called to tell me he was heading home. He said he had hurt his knee pretty bad and was stopping by CVS on the way home to get some ice because it was hurting pretty bad. I am ashamed to say I wasn’t very sympathetic, I was busy and didn’t figure it was TOO bad, guys are always spraining this or that when they play ball. Nothing a few days won’t heal, so I wasn’t worried. We hung up and I finished getting the kids in bed and finished grading papers. While I was working it suddenly started sinking in that Chester was stopping at CVS to BUY ice because he was hurting so bad. That was kind of wierd and a red flag went up. I realized I should have had more sympathy for him. Sure enough when he did make it home he came in dragging himself in the door. His whole body was just shaking. I belive he was in shock. His knee was swollen and he could hardly walk. I tried the best I could to help him in bed. Fast forward and little… Chester spent the next few days holding down the couch, if he got around he used a crutch, he was in a fair amount of pain that Aleve wasn’t cutting. Lots of ice and elevation. On the 21st he decided to go to his Physical Therapist to see what they had to say. They told him he needed to go see Dr. Grant so we scheduled an appointment for the next day. He was able to go in and get a shot in his knee to help reduce swelling and told to take it easy and see if it got better….