We managed to get all our gear around and loaded into/onto our mini van. Wow! Quite a difference in packing room in a mini van and a motorhome!

We were chock full. We pulled the trailer with our canoe, 2 kayaks, fishing poles, and all our bikes loaded on it as well as we strapped the canopy and table on as well. The car-top carrier was jam packed with gear and the inside of the van was stuffed with food and our clothes. We headed out of Charlottesville around 6:30 pm. We arrived around 8:15 and hurried to set our tent up and fix us some hot dogs for dinner. It decided to start sprinkling heavily while we were setting up the tent but thankfully it didn’t pour, just rained enough to get the inside of the tent wet before we got the rain fly on. The boys wanted to stay in our small tent so we set that one up for them as well. I should have gotten a picture of our campsite but didn’t think of it until we had taken everything down. We set up camp by Ned & Sarah, which has kind of become a tradition. Rodger & Lauren Rutt, Shauna Rutt, April & Kathryn Martin, Melissa & Tara Martin, Matt & Amy Hunt, Robby & Abby Cox, Art & Jessica Cox and Robert & Jill Cox came up on Thursday night as well. (I may have forgotten someone, I’m sorry!)

Lots more were able to make it this camp. Some came on Friday, some just came up for the day on Saturday, and some came and stayed Saturday night. You couldn’t have asked for better camping weather really! A couple nights it was on the chilly side but the days weren’t too hot. We did have a couple down-pours on Friday right as we were trying to get dinner around but it finished up and we were able to have dinner before it did another down-pour sending us into our tent to wait it out. Thankfully our new-to-us tent did really well in the rain. We had 2 little leaks where we didn’t have the rain fly on right but once we fixed that we were great! It rained some on Saturday evening as well so we ended up not having a camp fire sing but just sang under the pavilion and then Philip read a Bill Peet book called “The Luckiest One Of All” and then talked about being content and our place. Kathryn & April Martin & Aubrey Amyett made doughnuts for everyone. 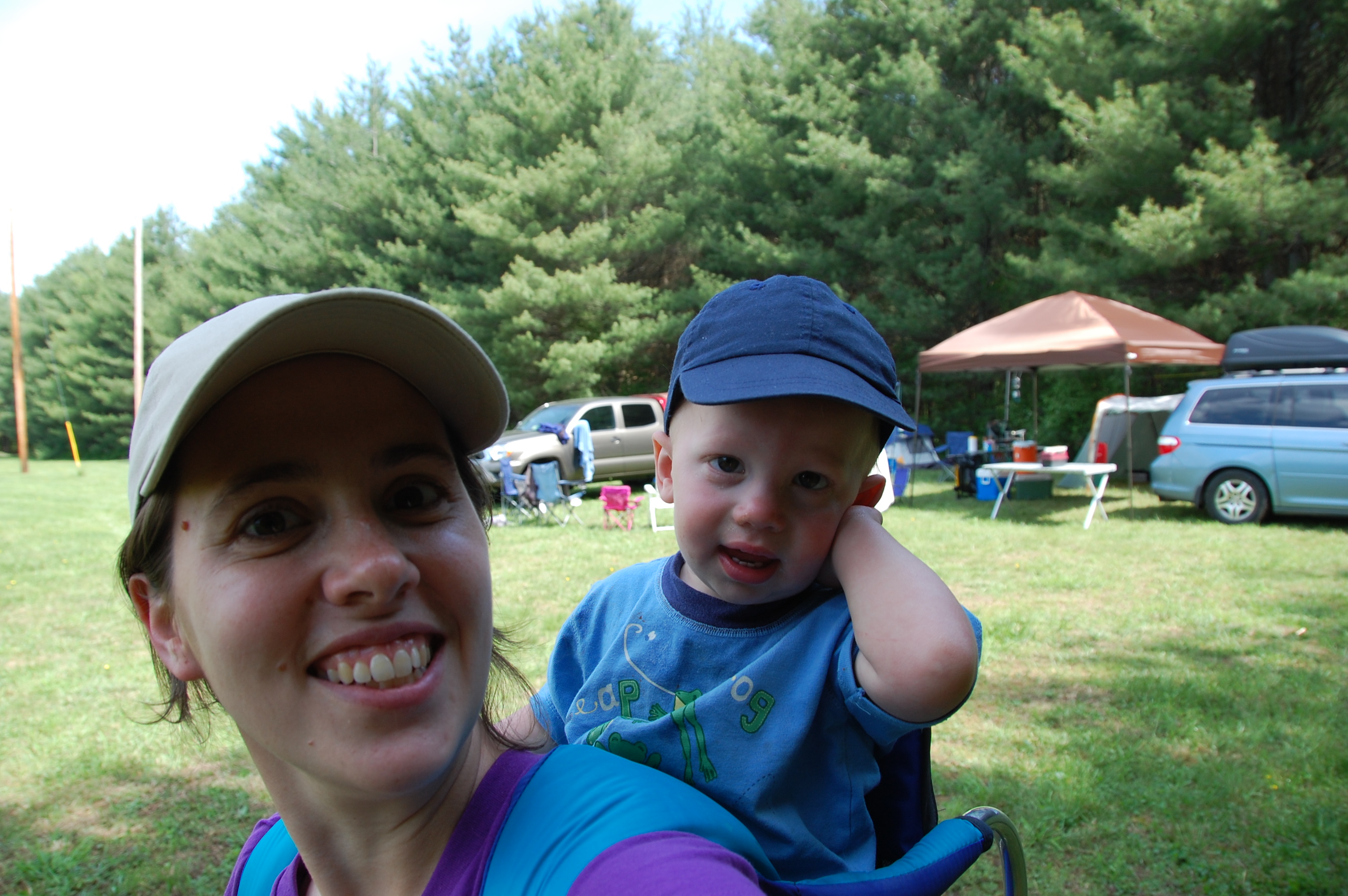 I carried Kolby around in the backpack a lot 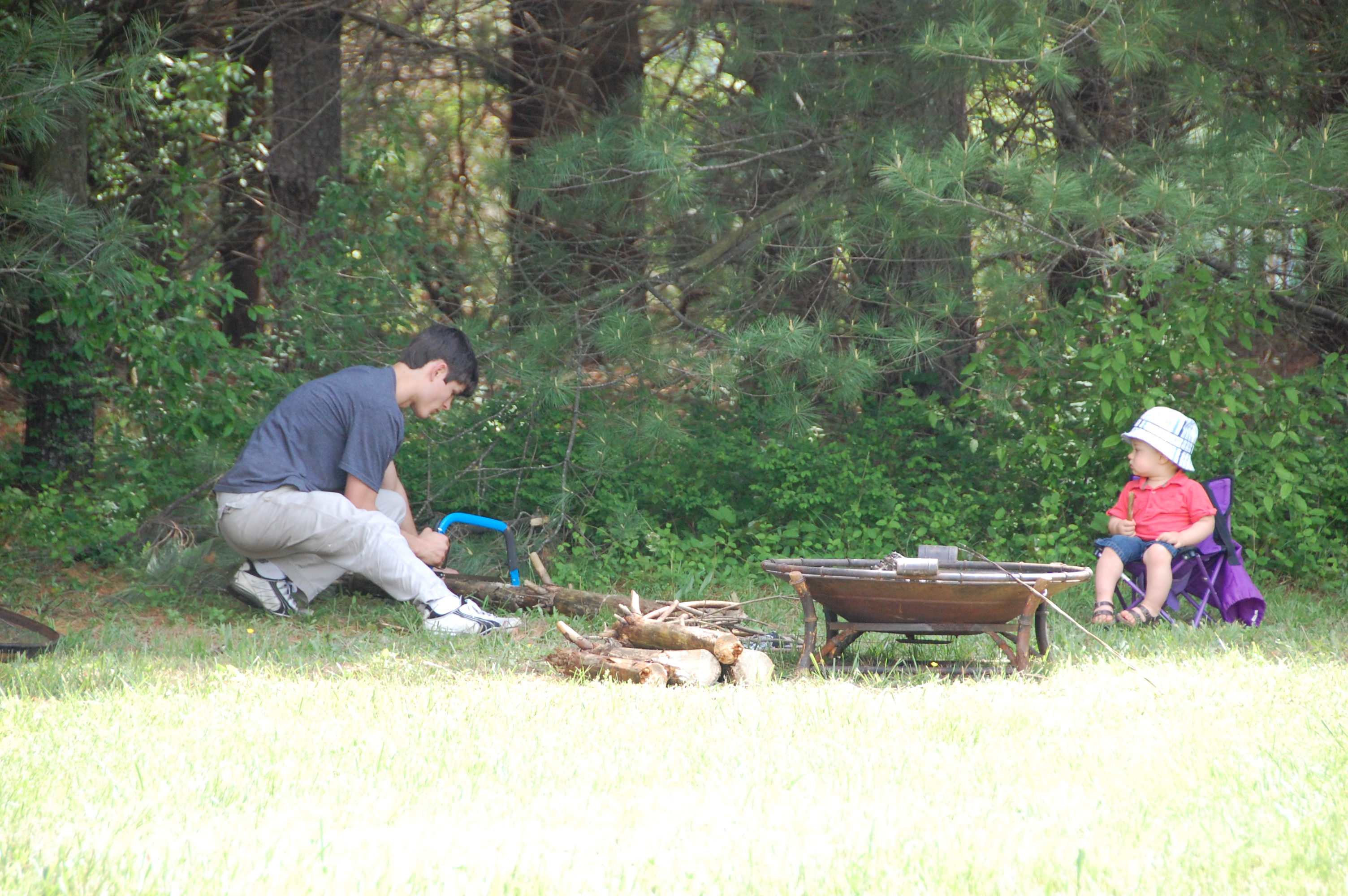 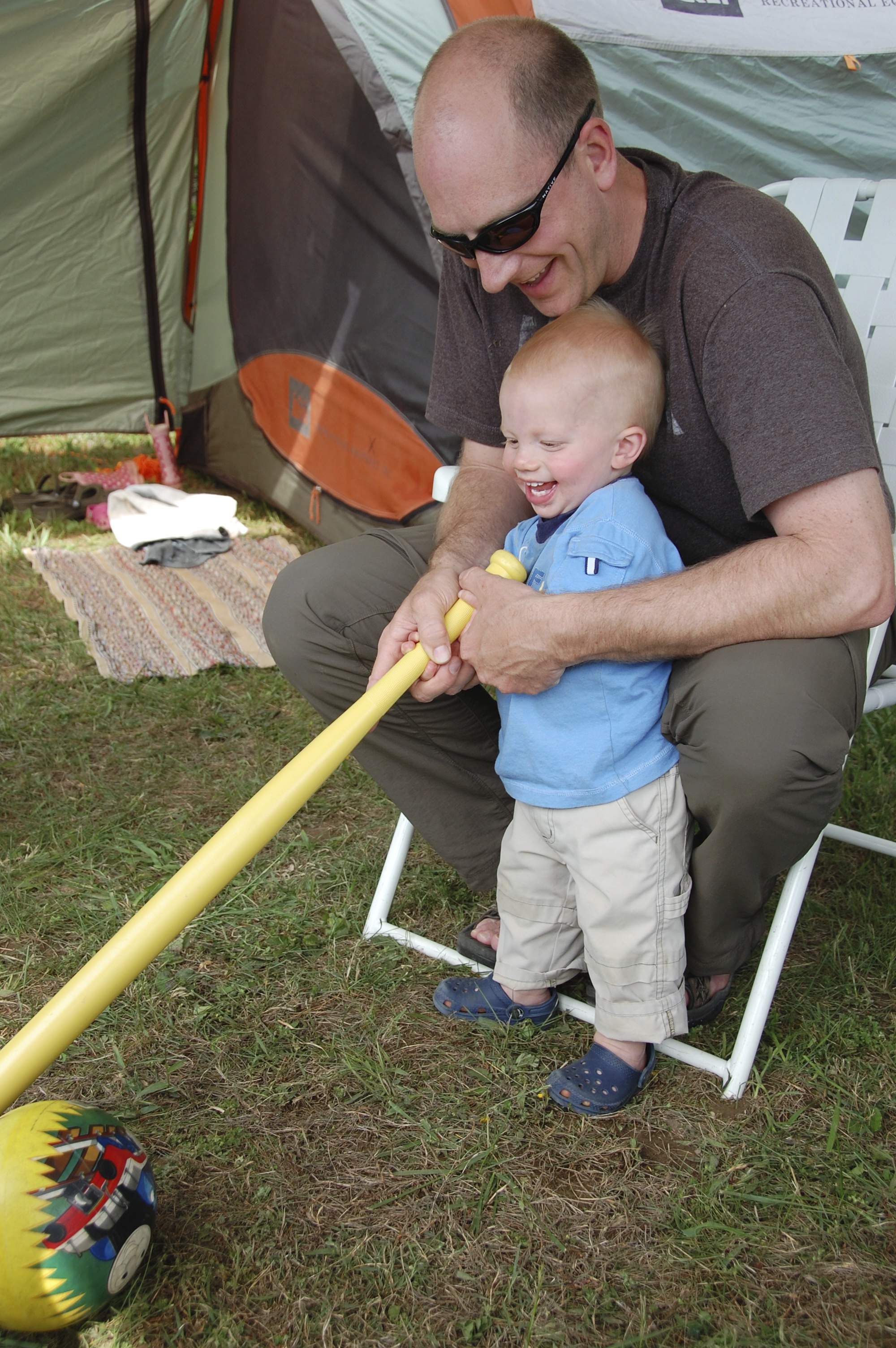 During the day we fished, biked, (some) kayaked, visited, ate, flew kites, played volleyball, etc. Saturday afternoon the guys played some very competitive games of volleyball. That was lots of fun to watch! Sunday we tried to play Frisbee Football but it was too windy so we had to switch out the frisbee for a football. I’m not sure what you call the game Football Football? That was lots of fun even though I can’t catch or throw a football very well. I have to admit I’m afraid of catching footballs. I guess I must have missed and gotten nailed a few too many times in my lifetime. The guys were easy on us and didn’t give us too hard of passes to catch. I really enjoyed getting to play. (Thanks Chester for watching Kolby so I could play.) 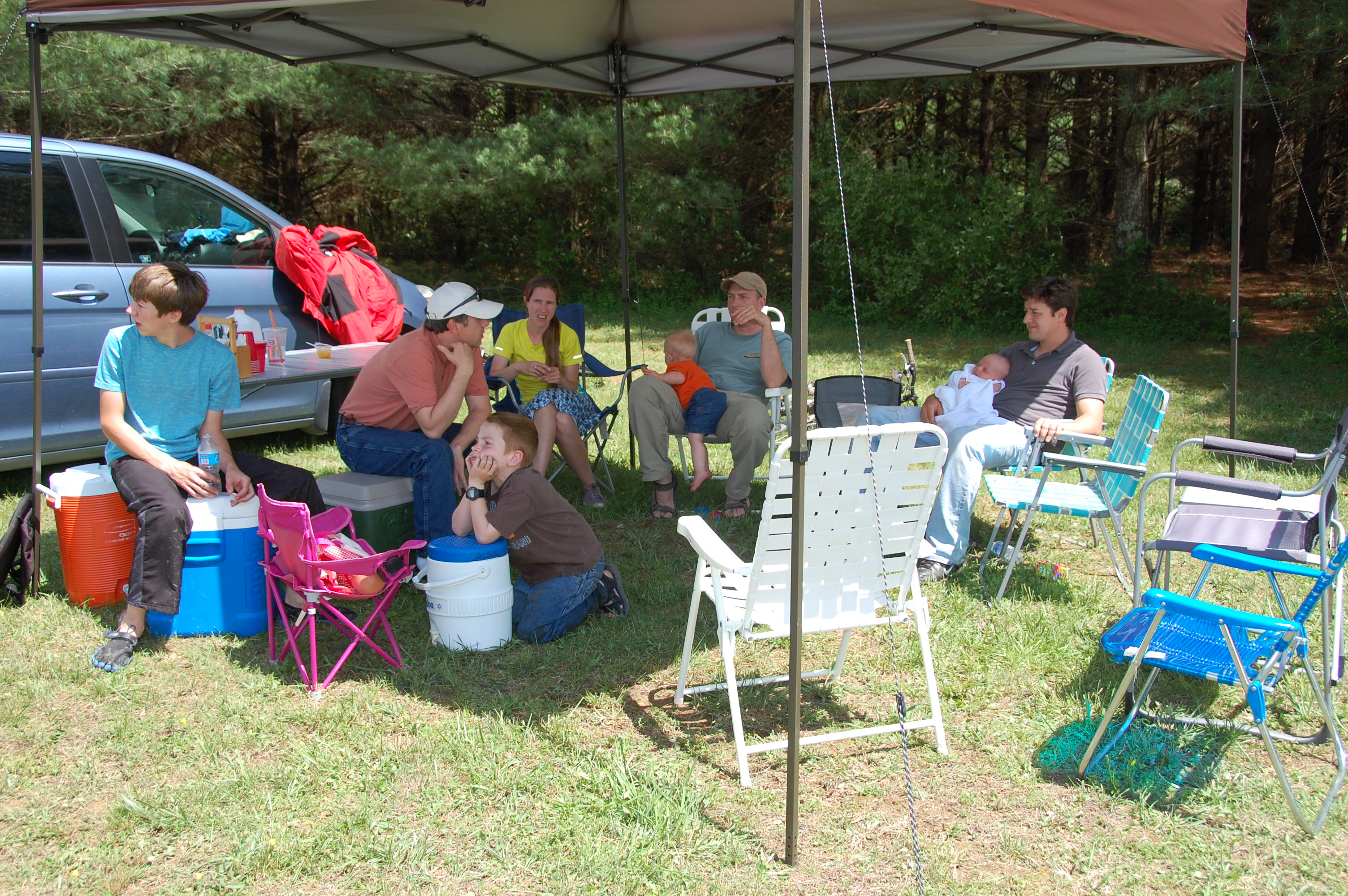 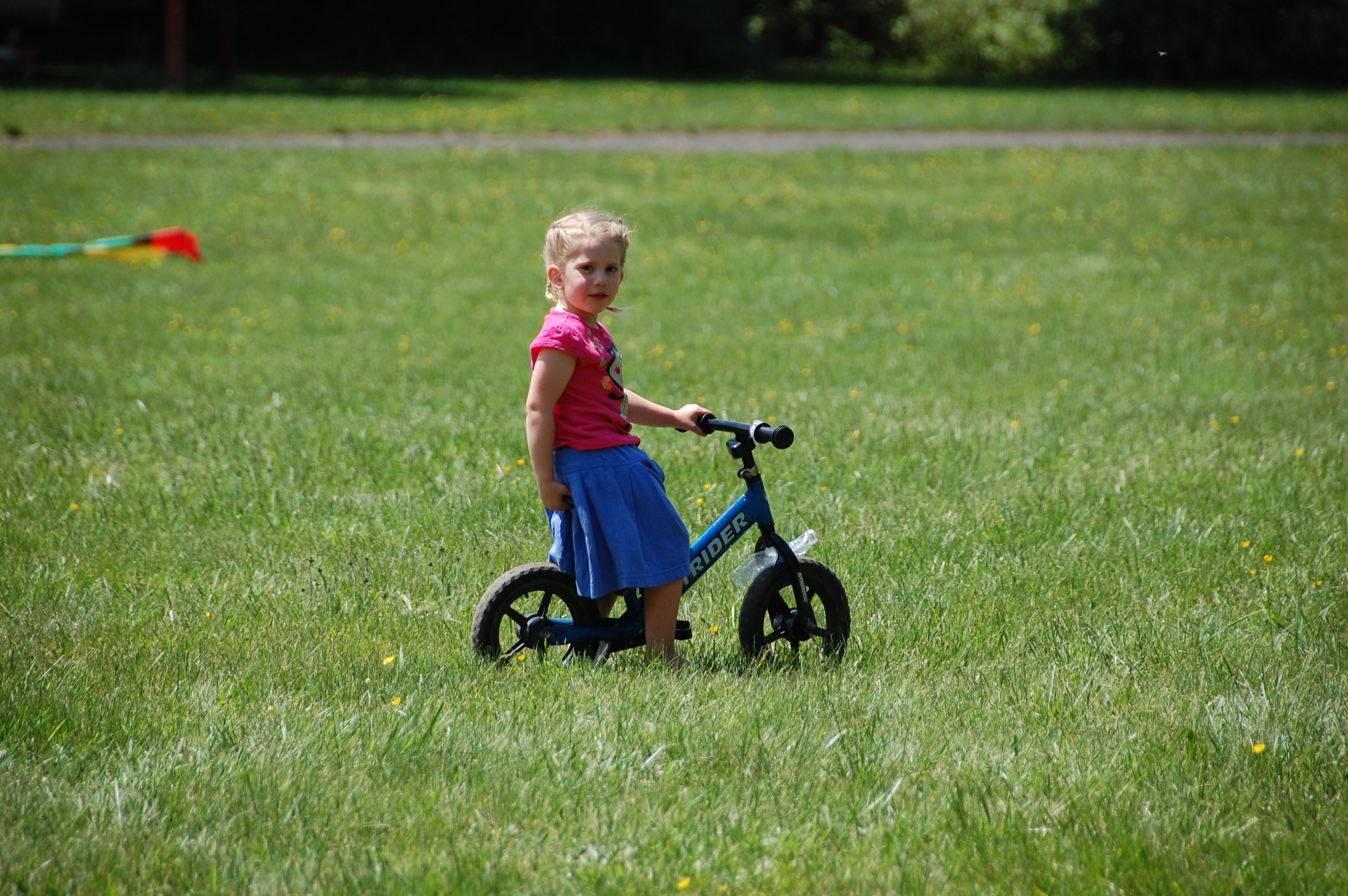 Kaylin taking her Strider for a spin 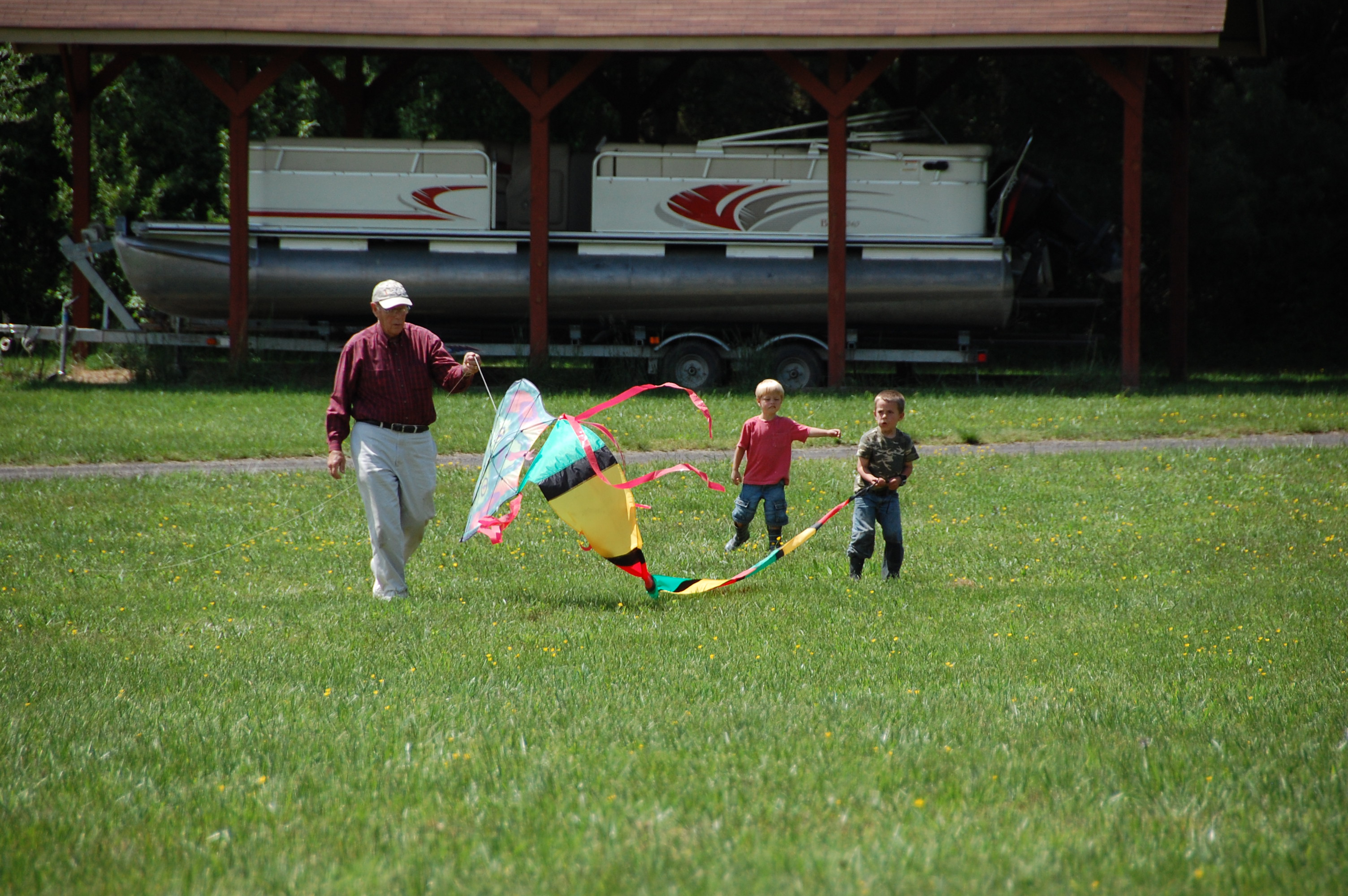 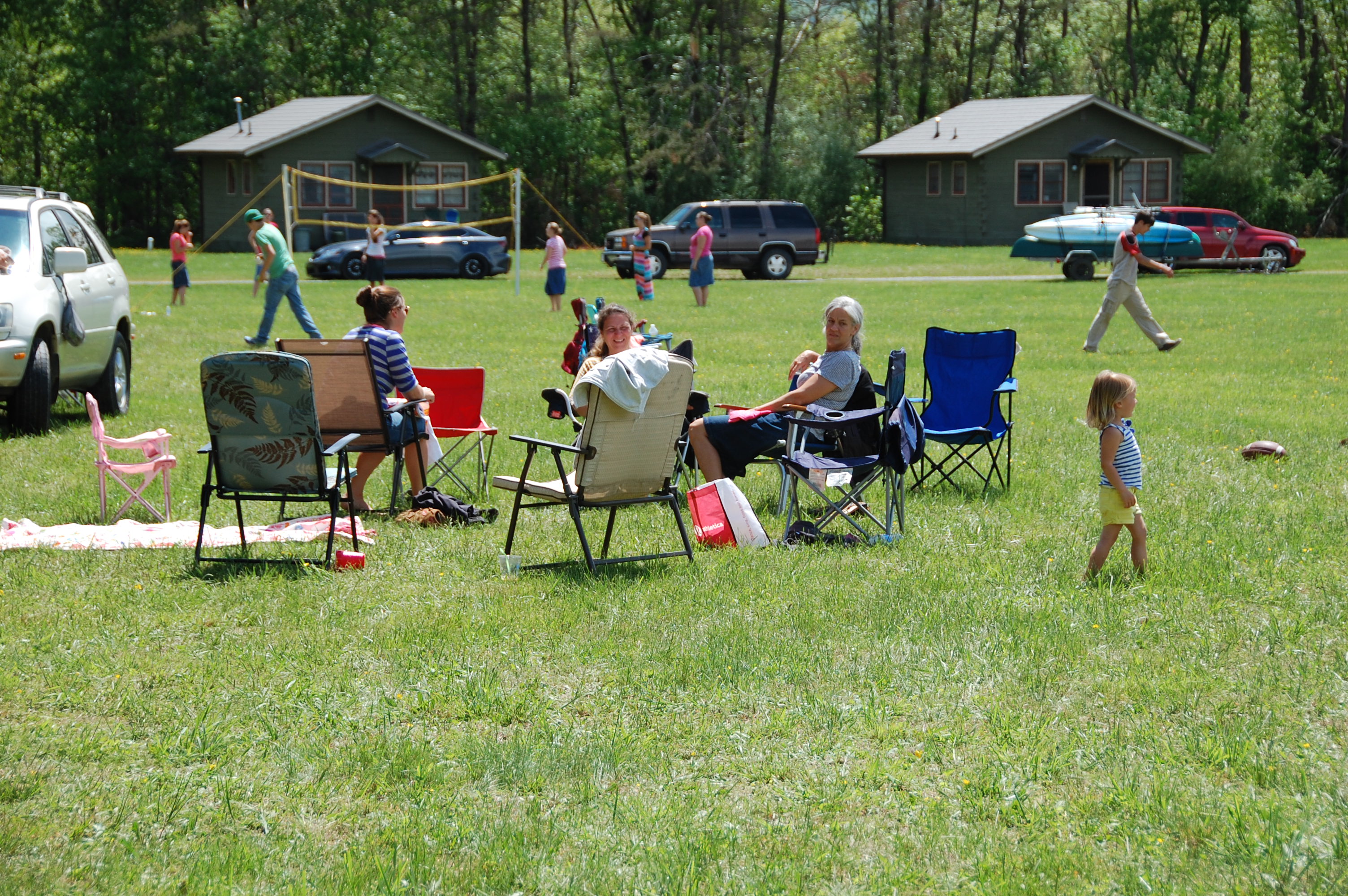 Lots of visiting & ball (and enjoying the sun) 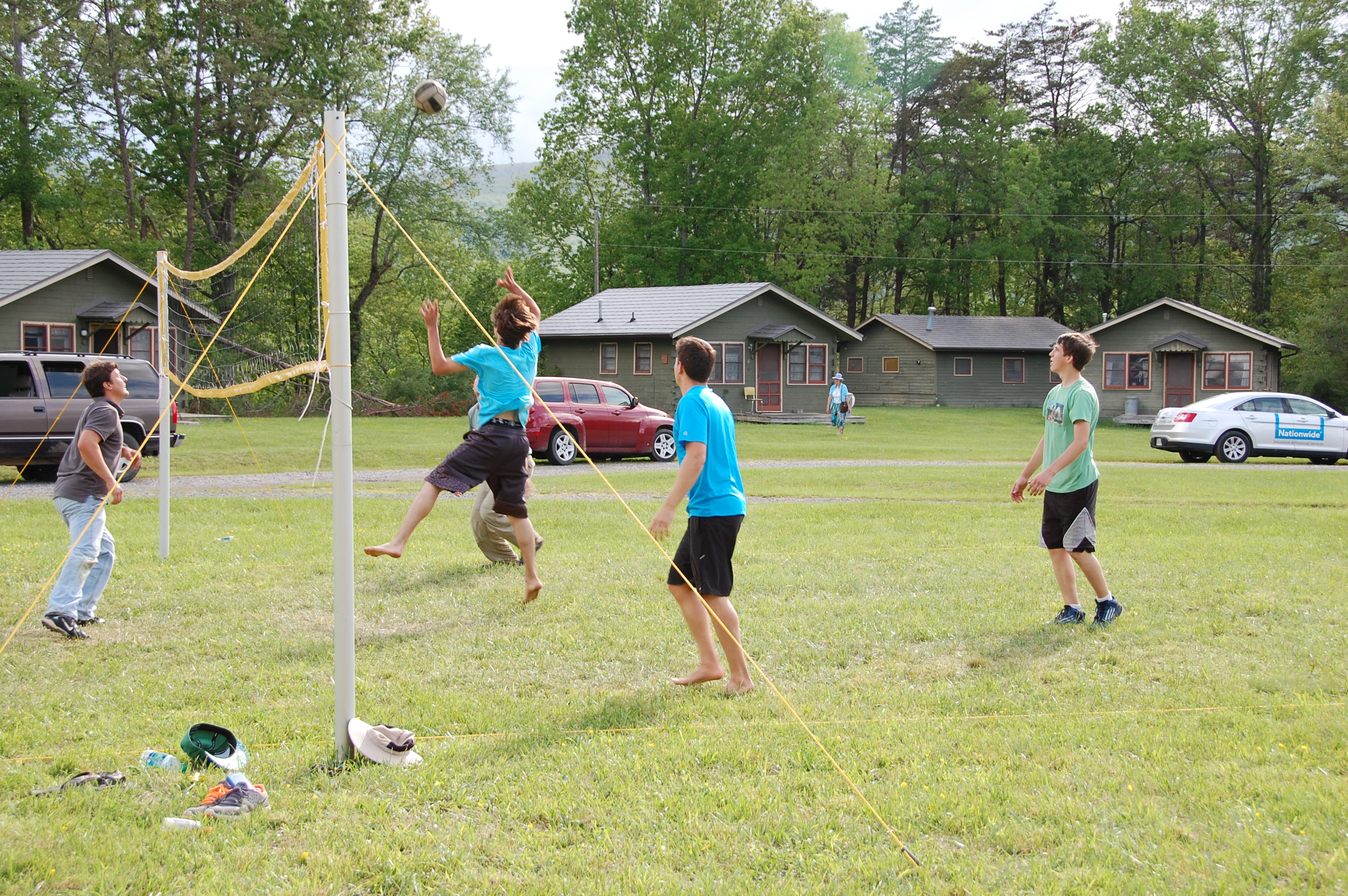 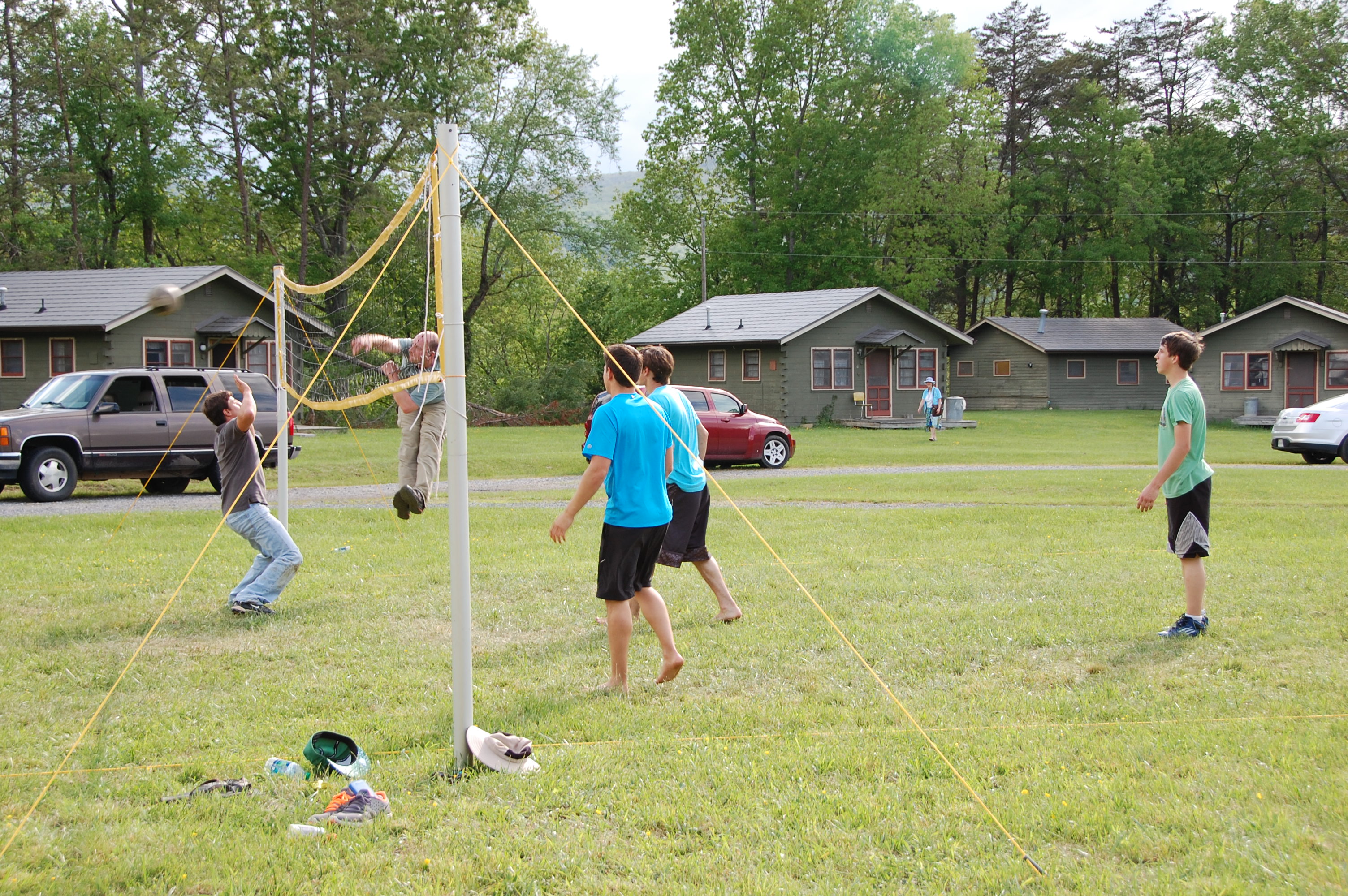 And Chester goes for the spike! Great form Babe! 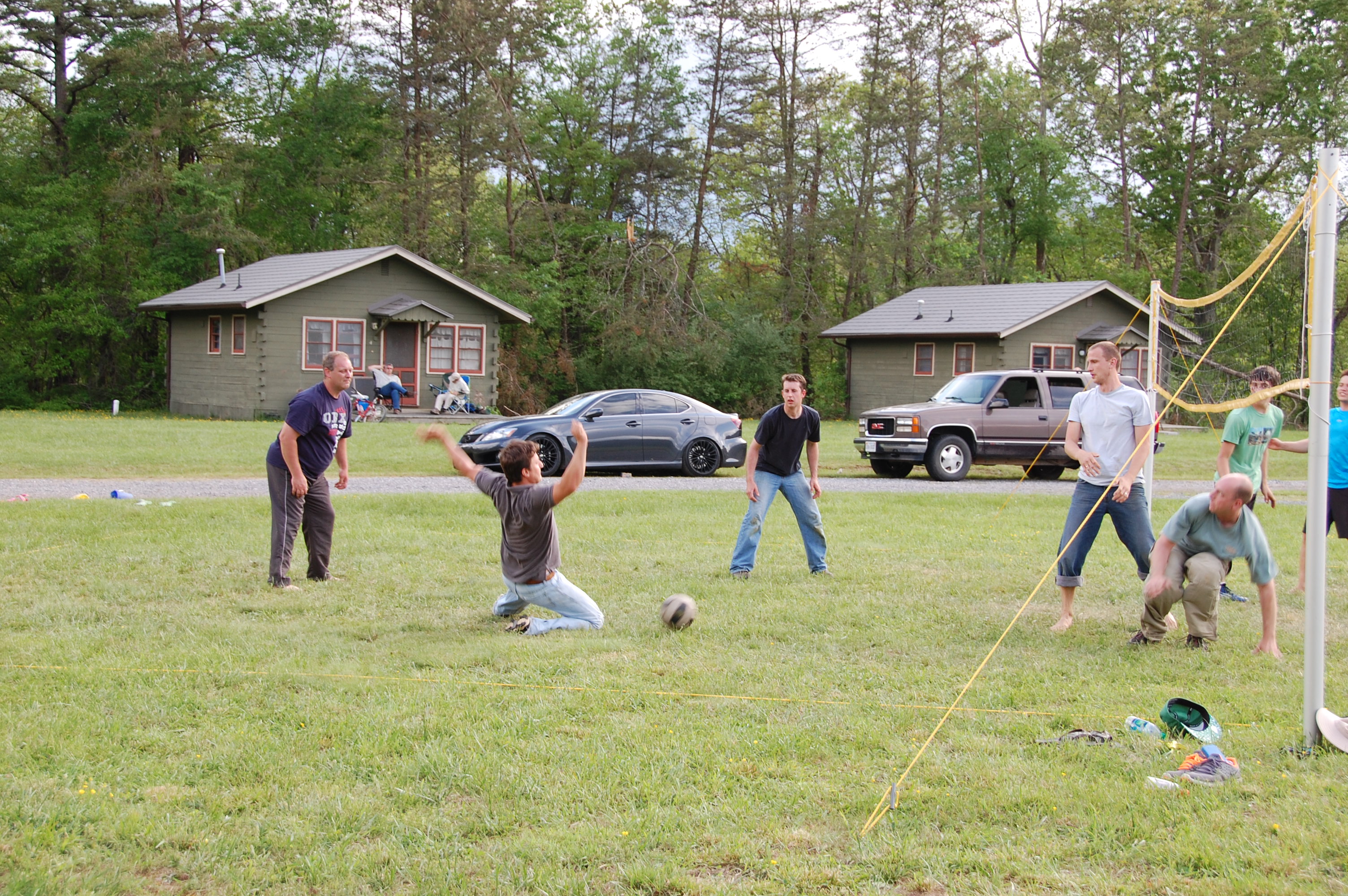 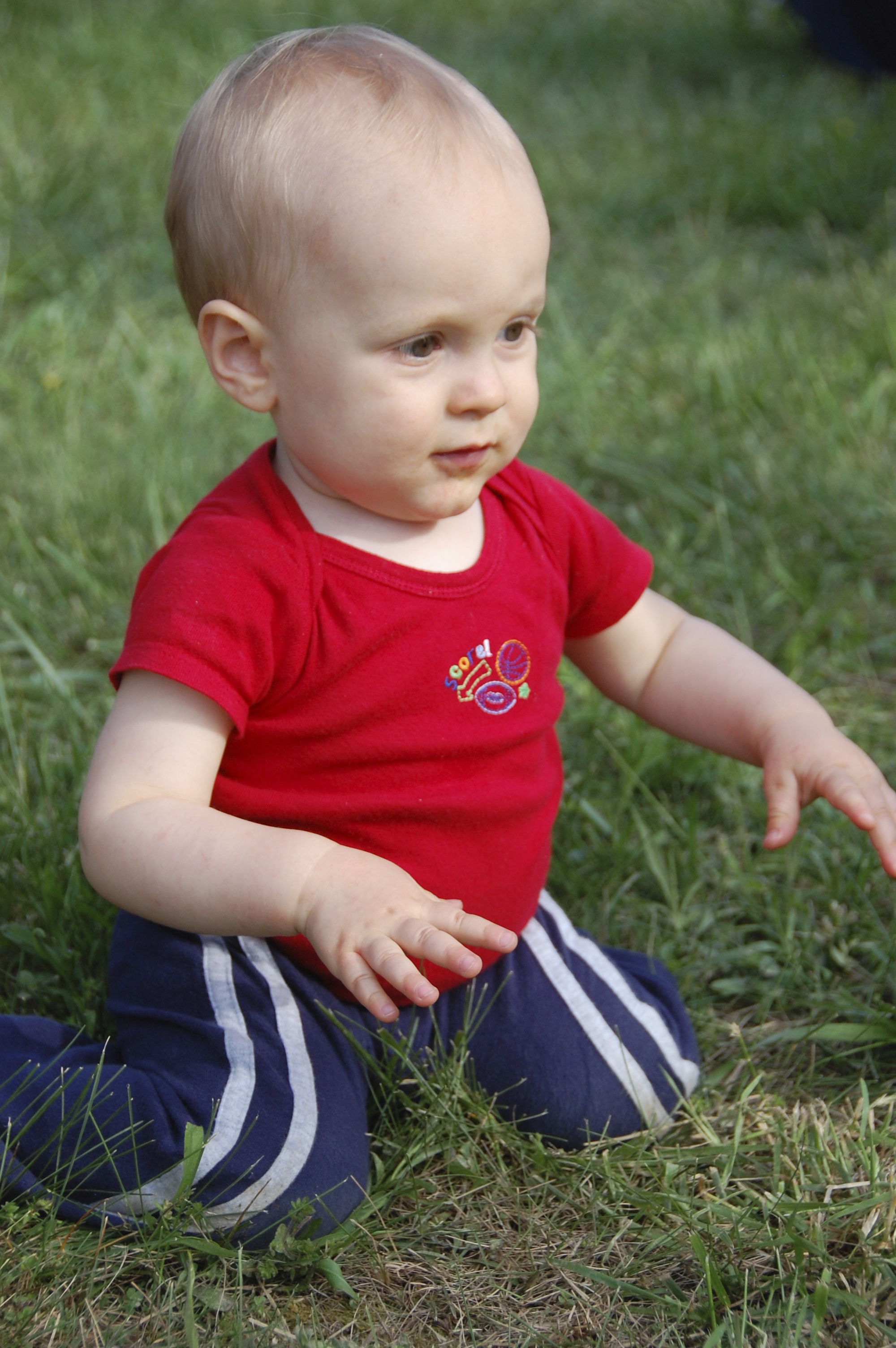 One of the Harrison twins (sorry I’ll have to ask which one it is.) 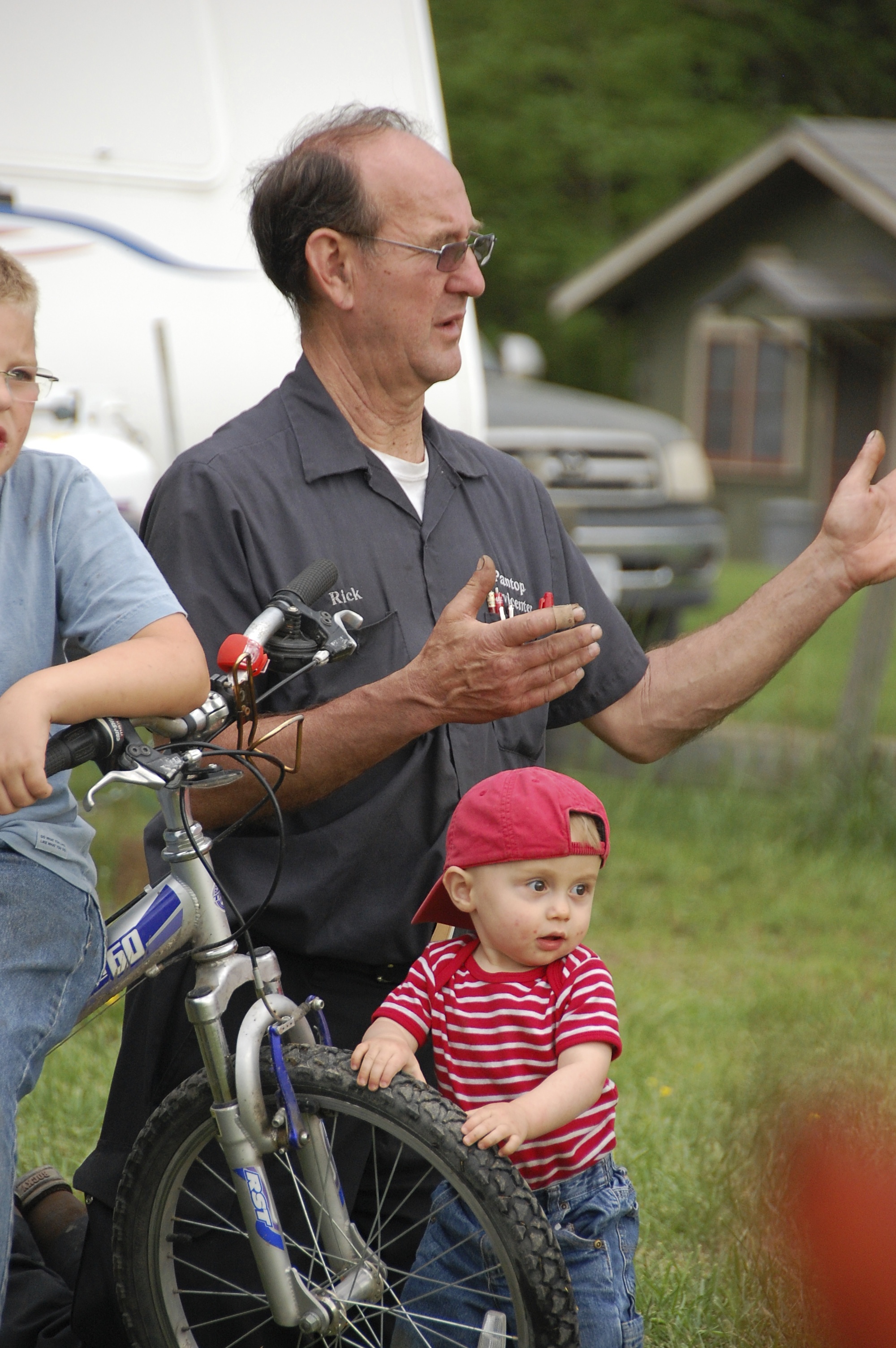 Rick Baumgardner and the other Harrison twin. 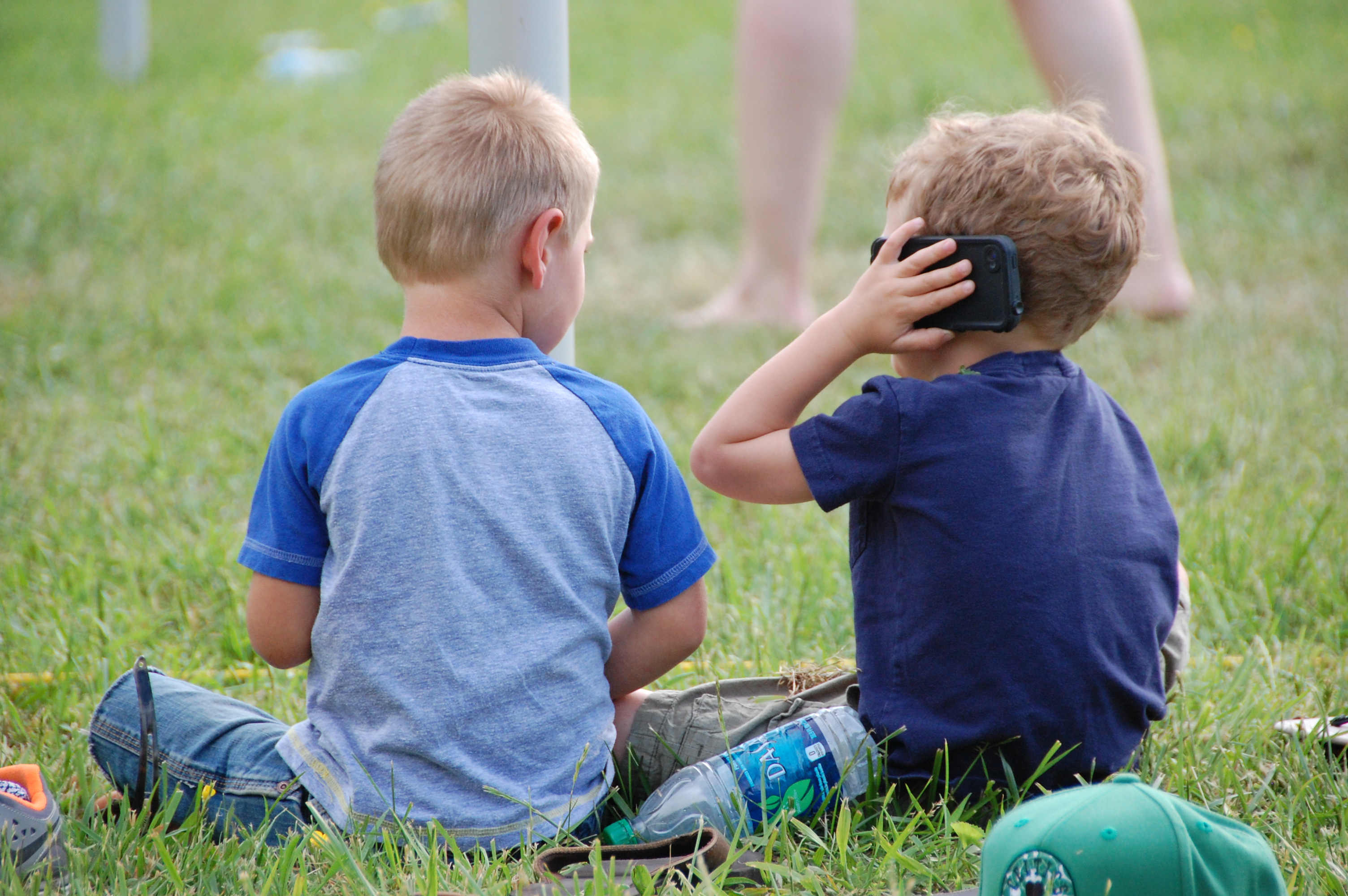 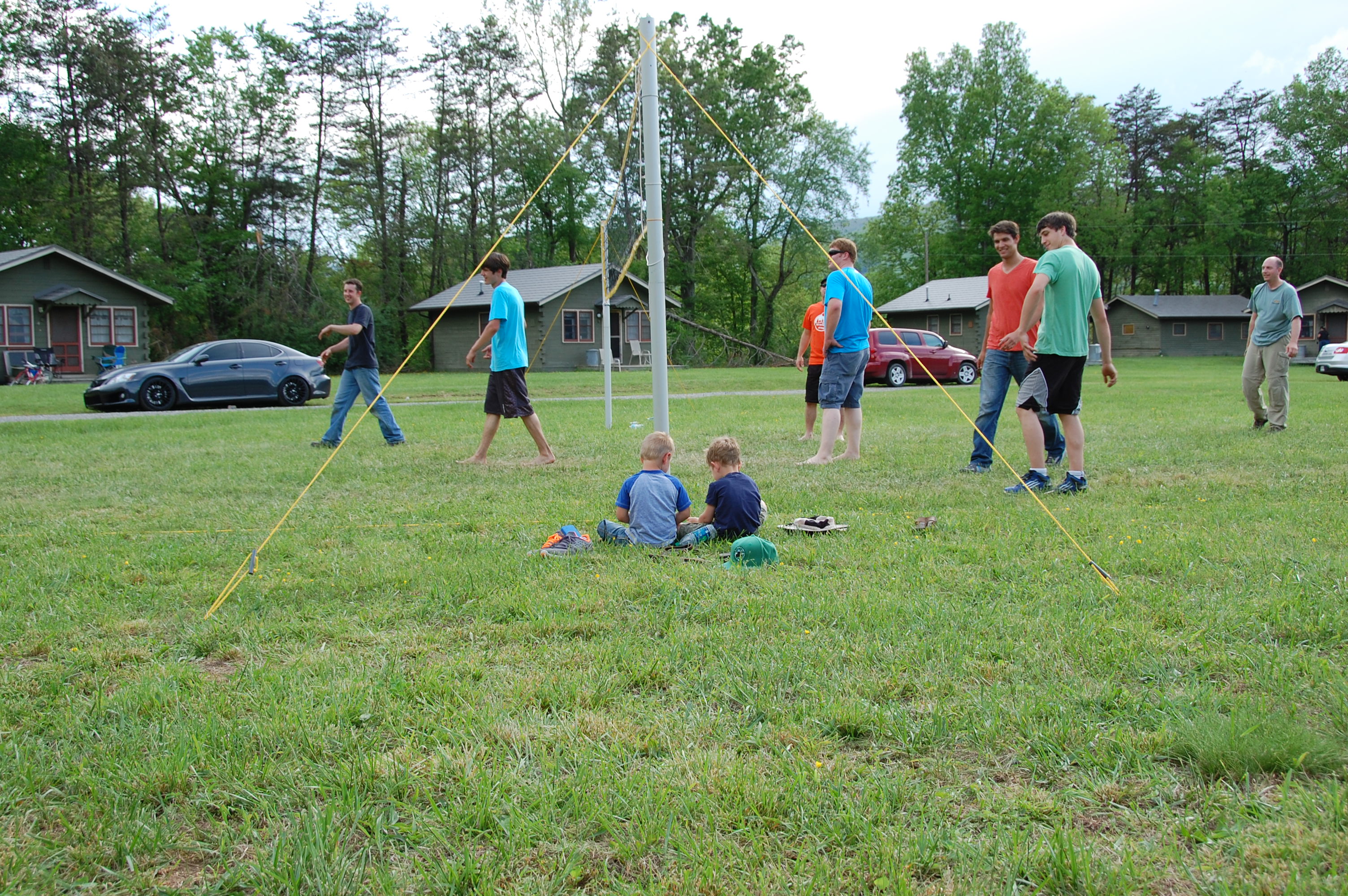 They were in their own little world checking all the guys stuff out. 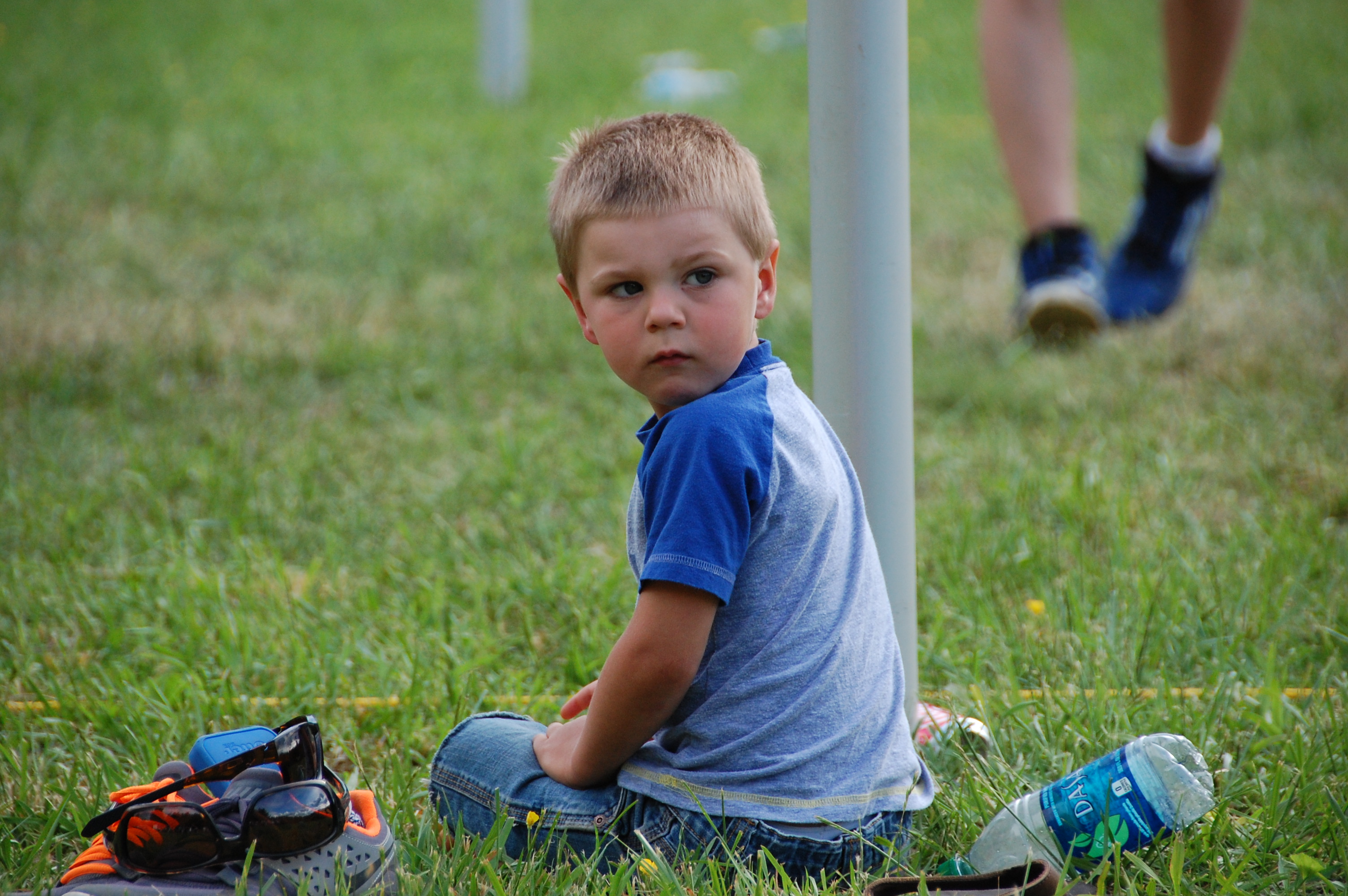 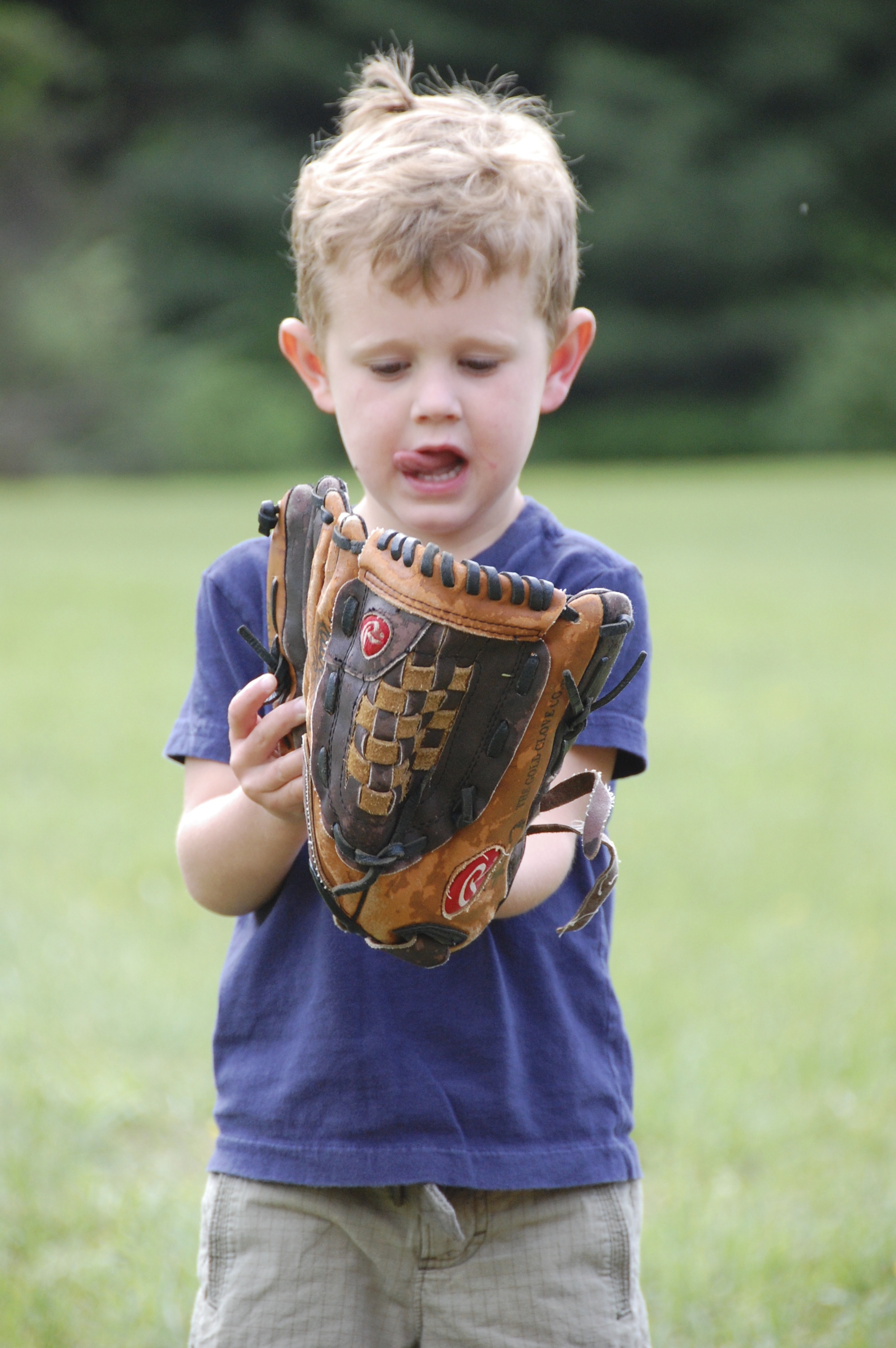 Braxton Kennedy working so hard to get that glove on! (Nick & Lindsey’s oldest) 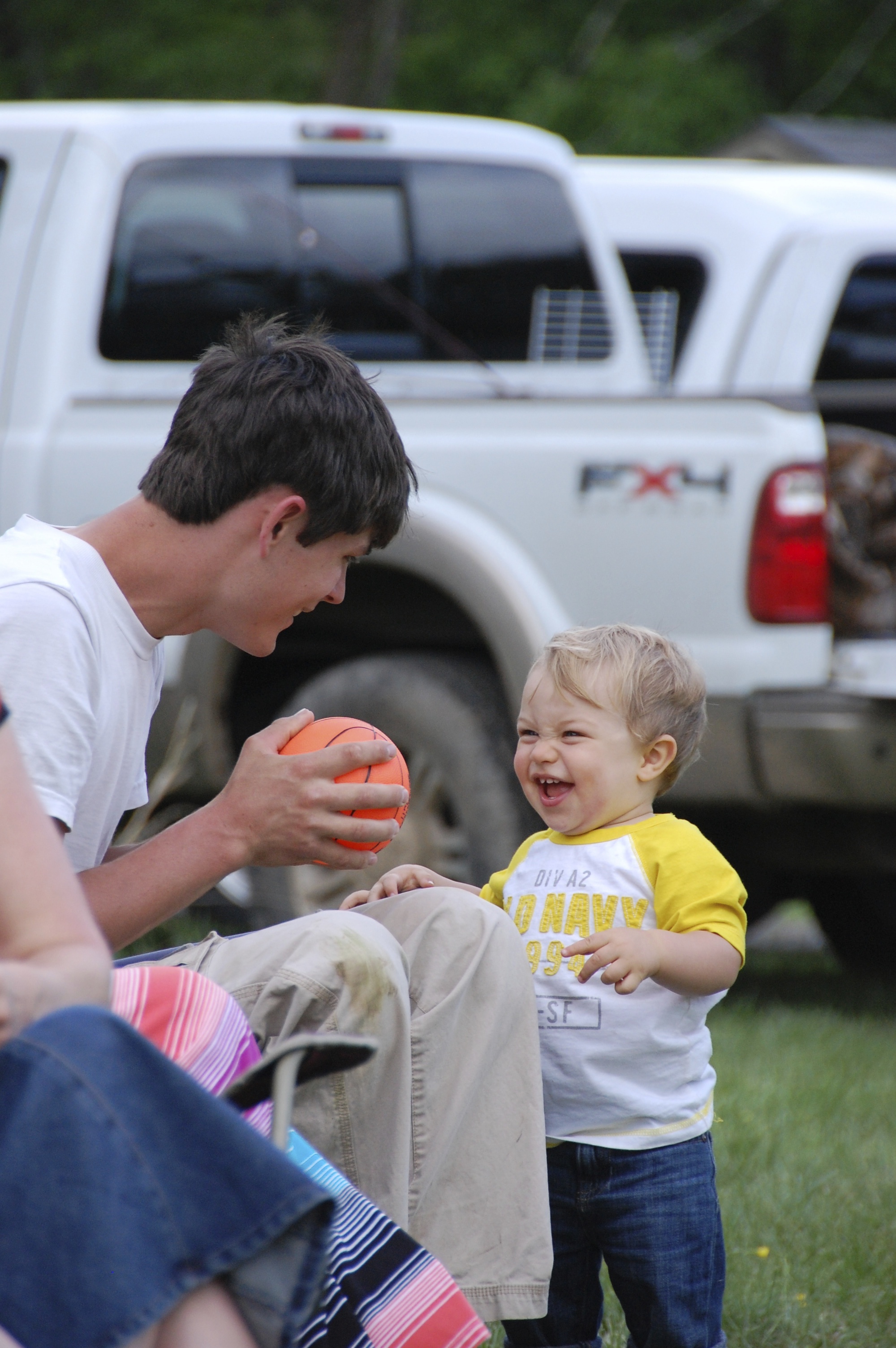 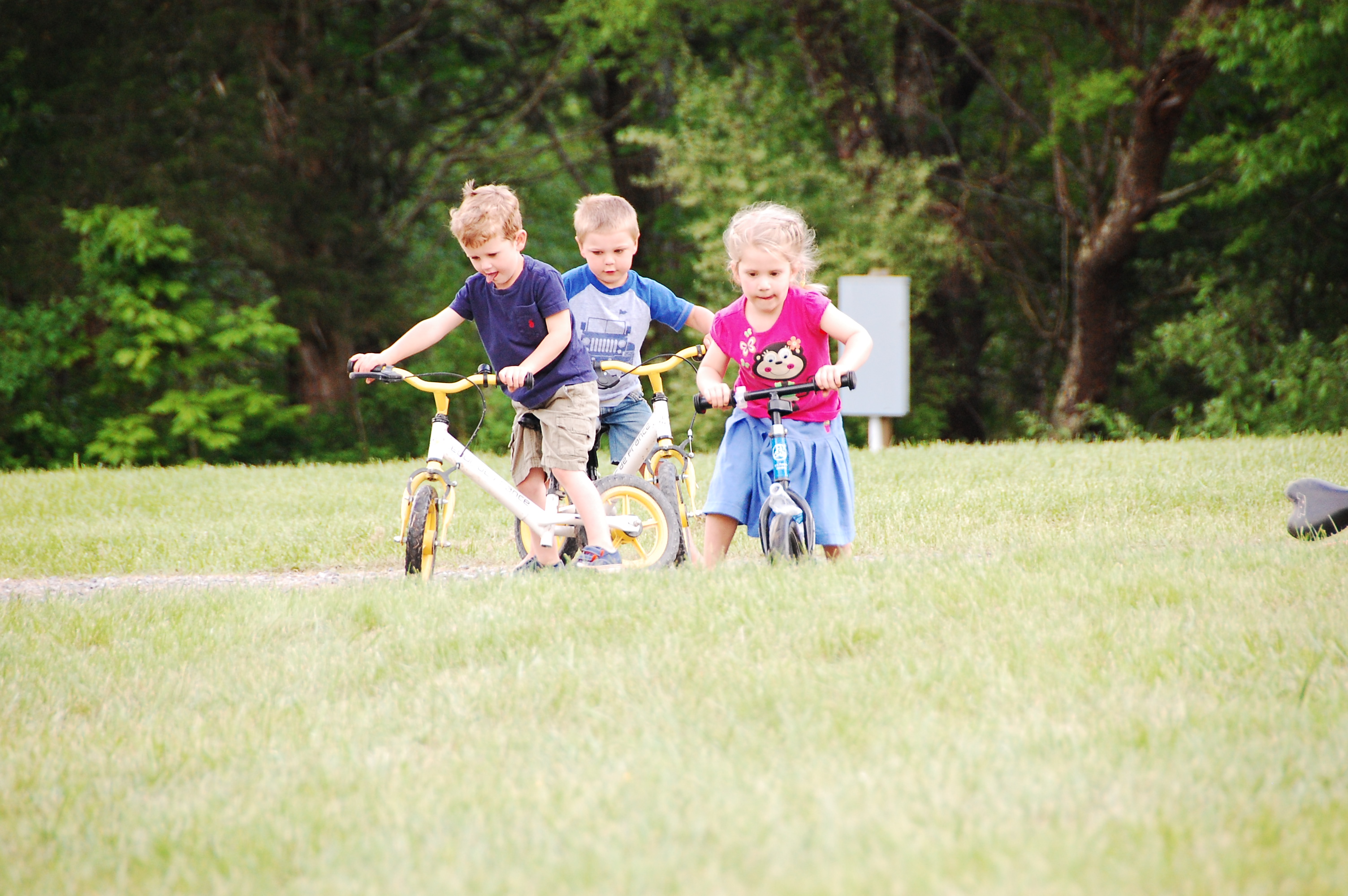 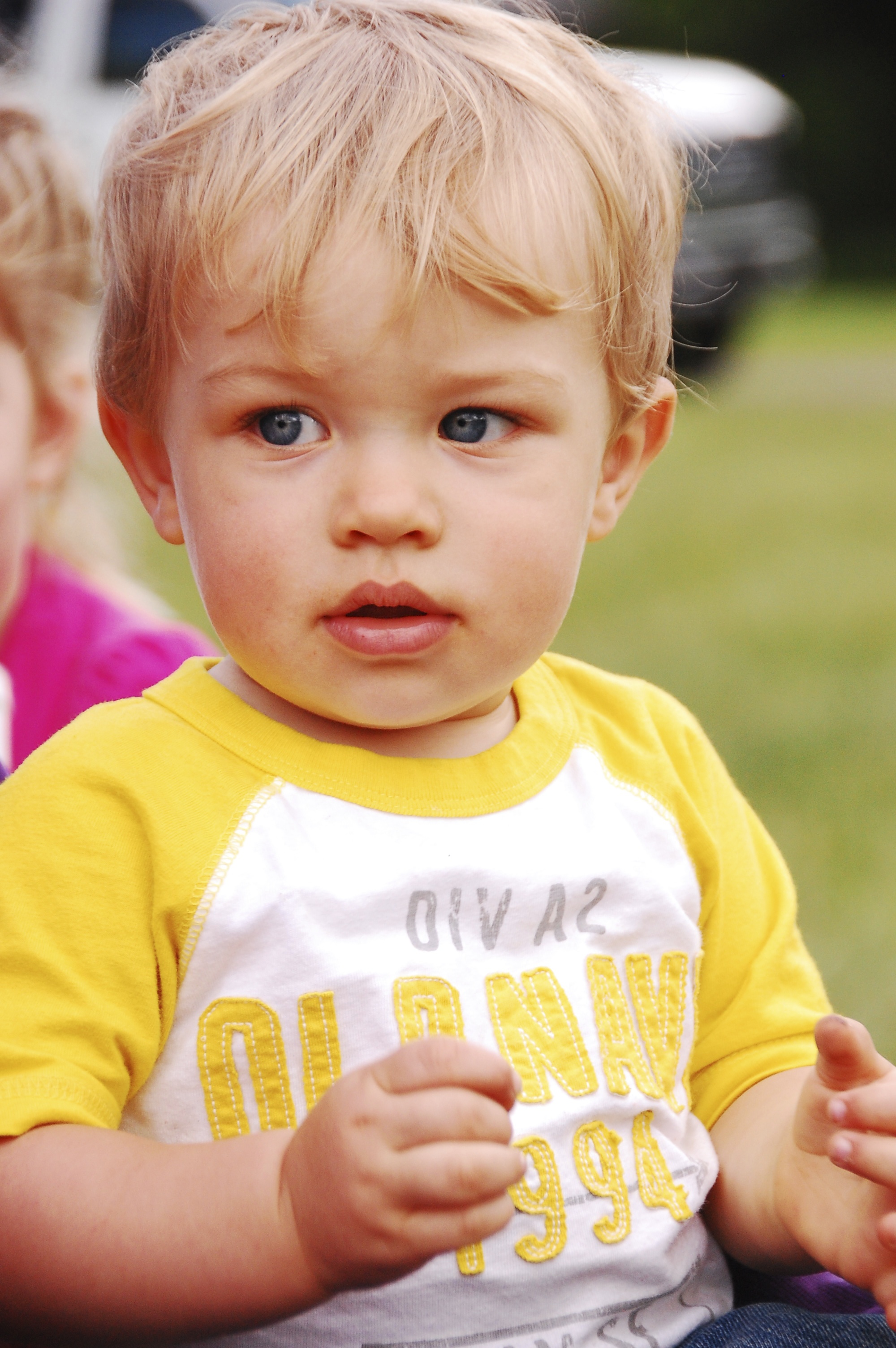 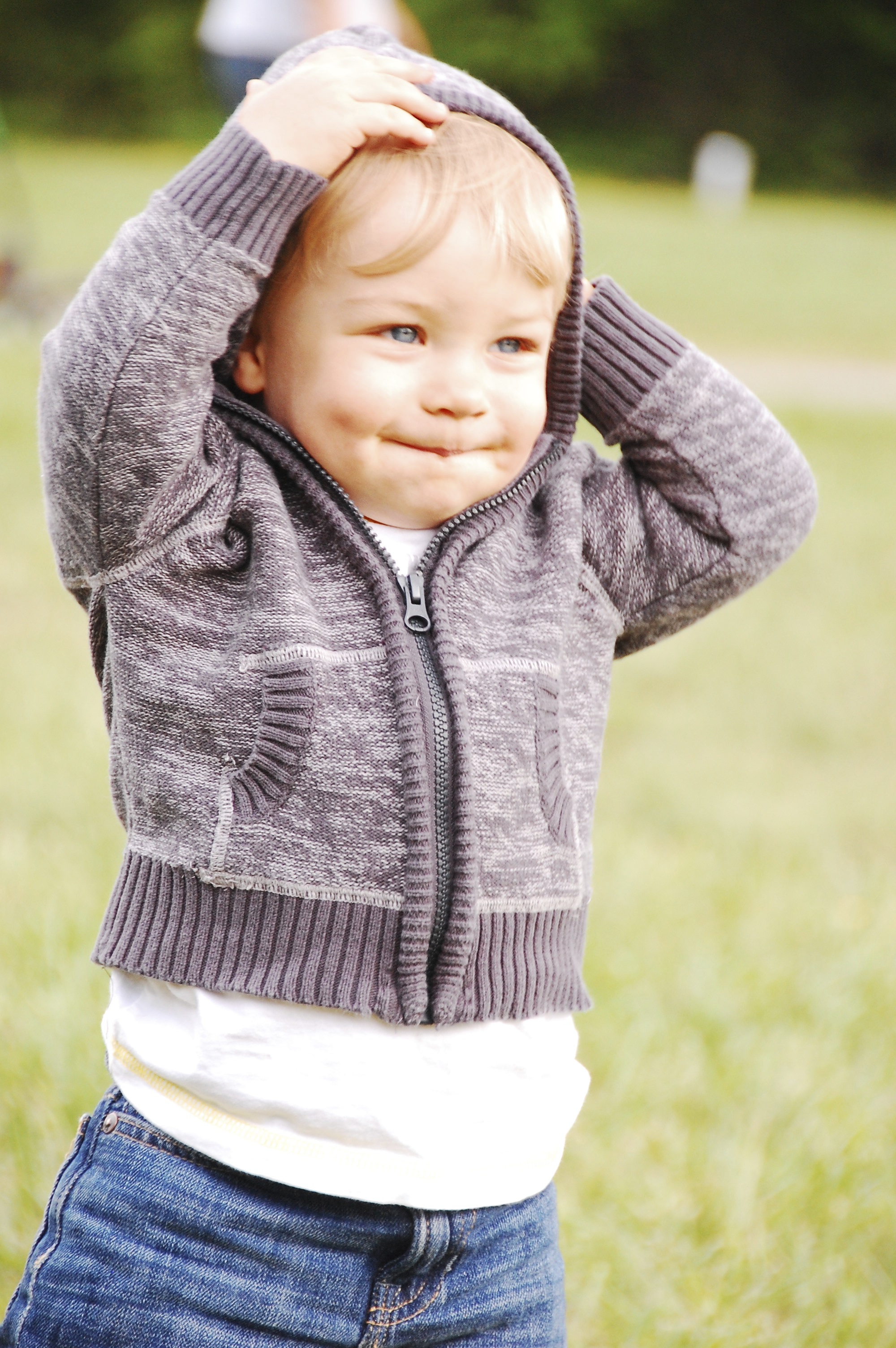 We did a chalupa dinner with Chris and Melissa on Friday night. Saturday morning we did eggs, sausage, and muffins together with Bobby and Laura. We were able to to fix chicken salad sandwiches for Ian, Kristy & girls on Saturday for lunch. And then on Saturday evening we did dinner together with Philip and Ronda Cotten & Celia Smith. We had chicken skewers, potato salad, green salad, grilled asparagus (from Ronda’s garden-YUMMY!), pineapple, & cookies. Saturday evening we did a community grill so almost everyone brought their food over to the pavilion to grill on the huge grill and we ate “together” under the pavilion. 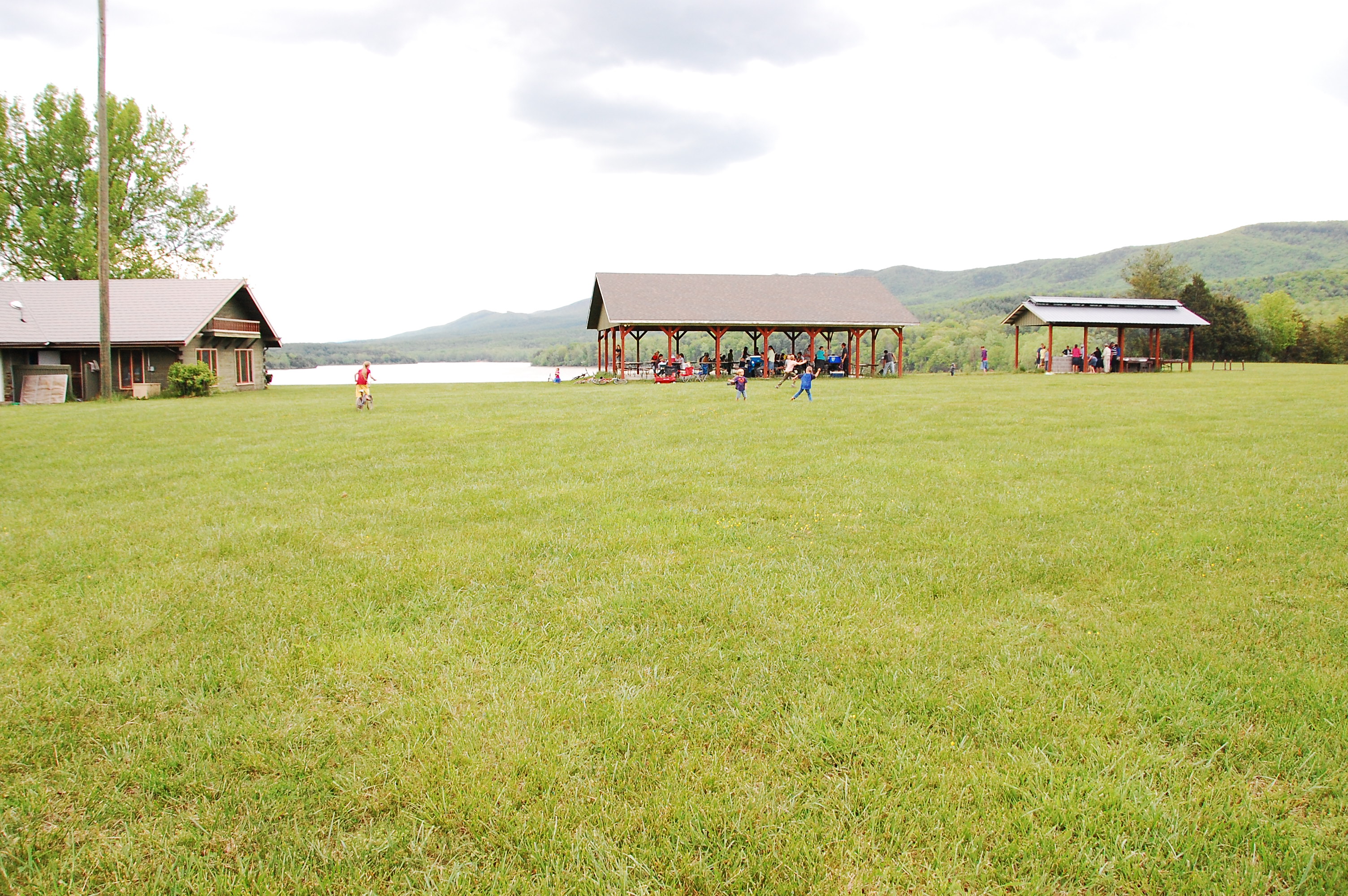 Most of us ate dinner under the pavilion on Saturday night. 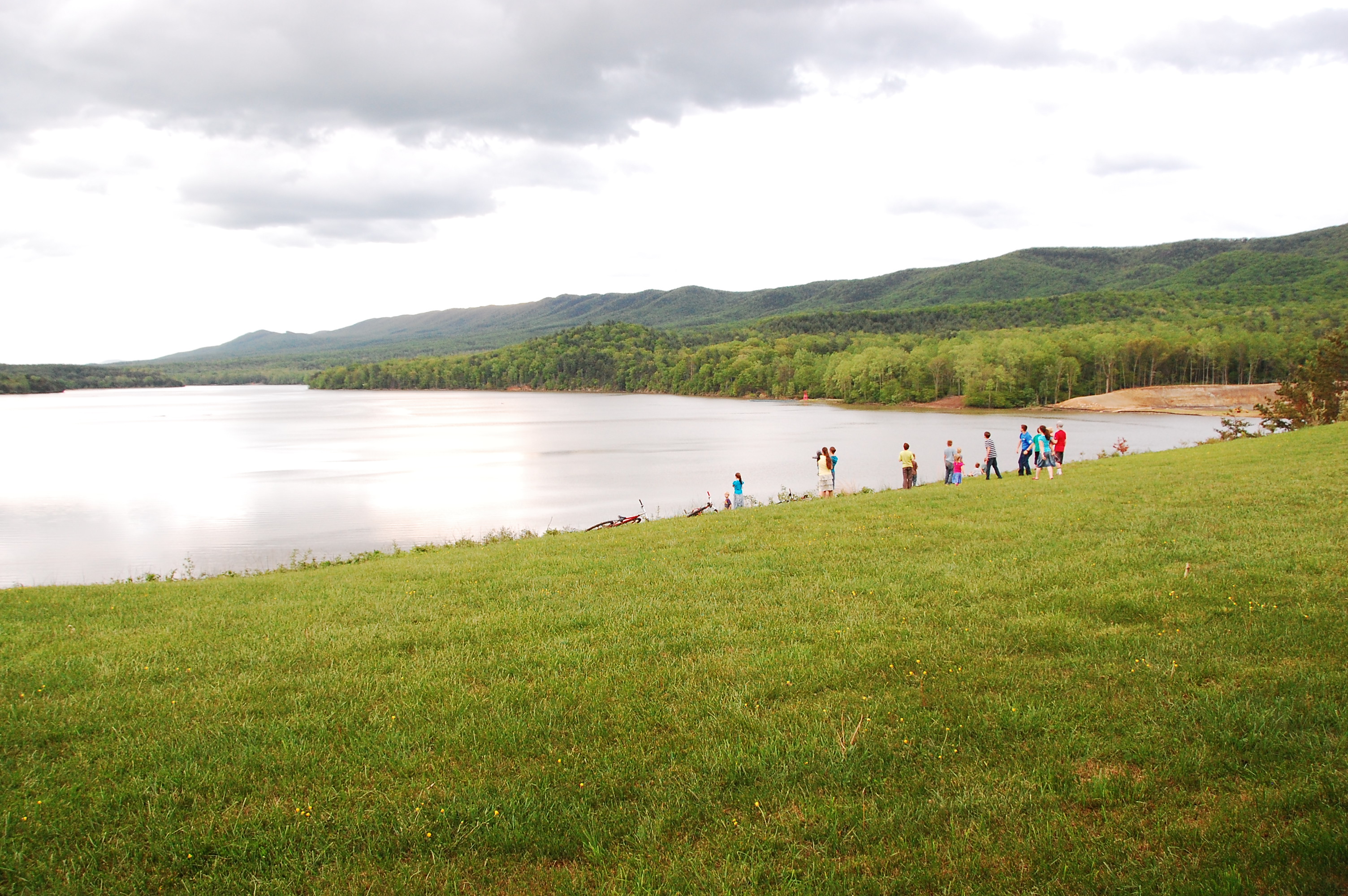 Kids trying to throw rocks down into the lake 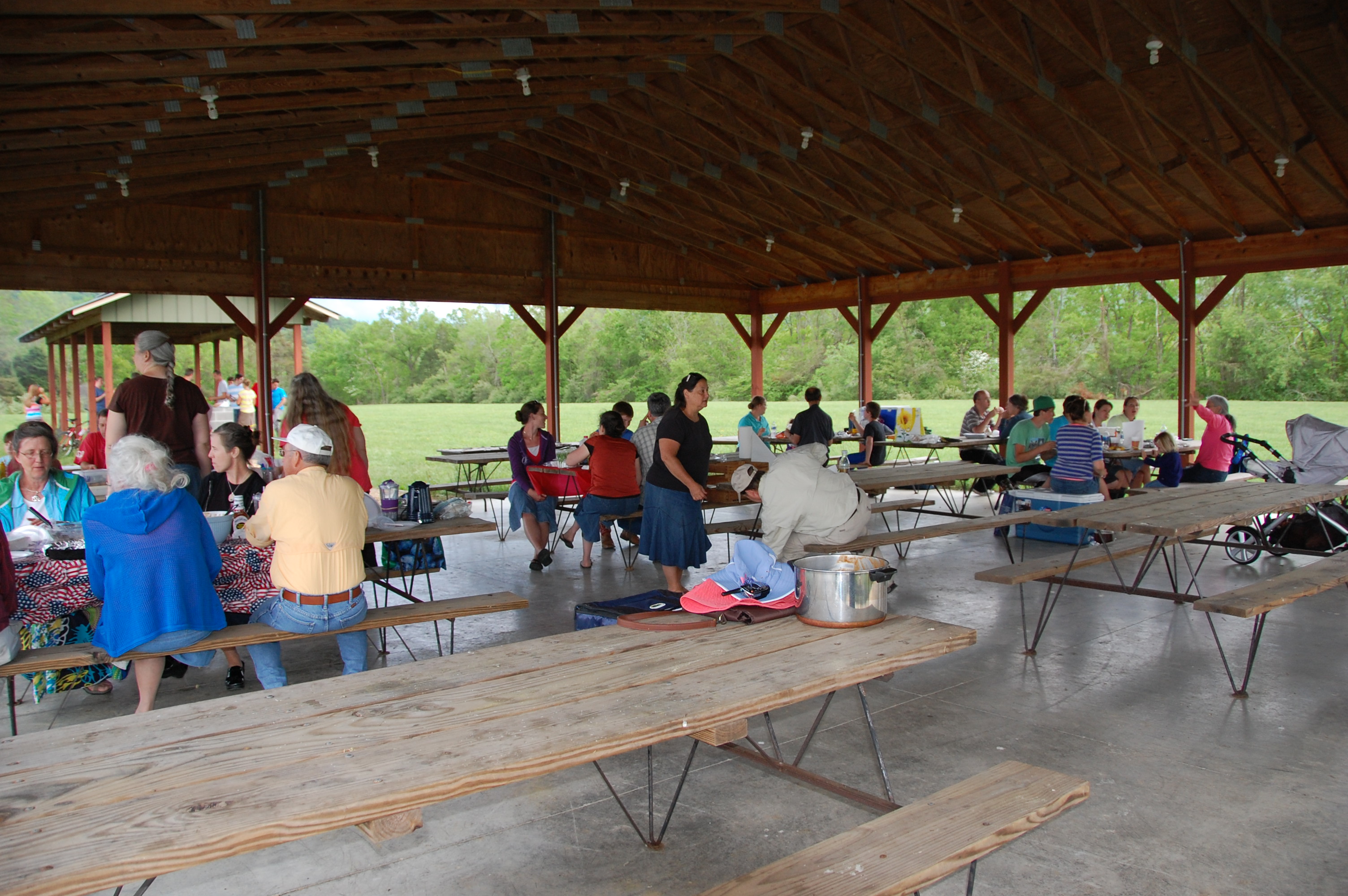 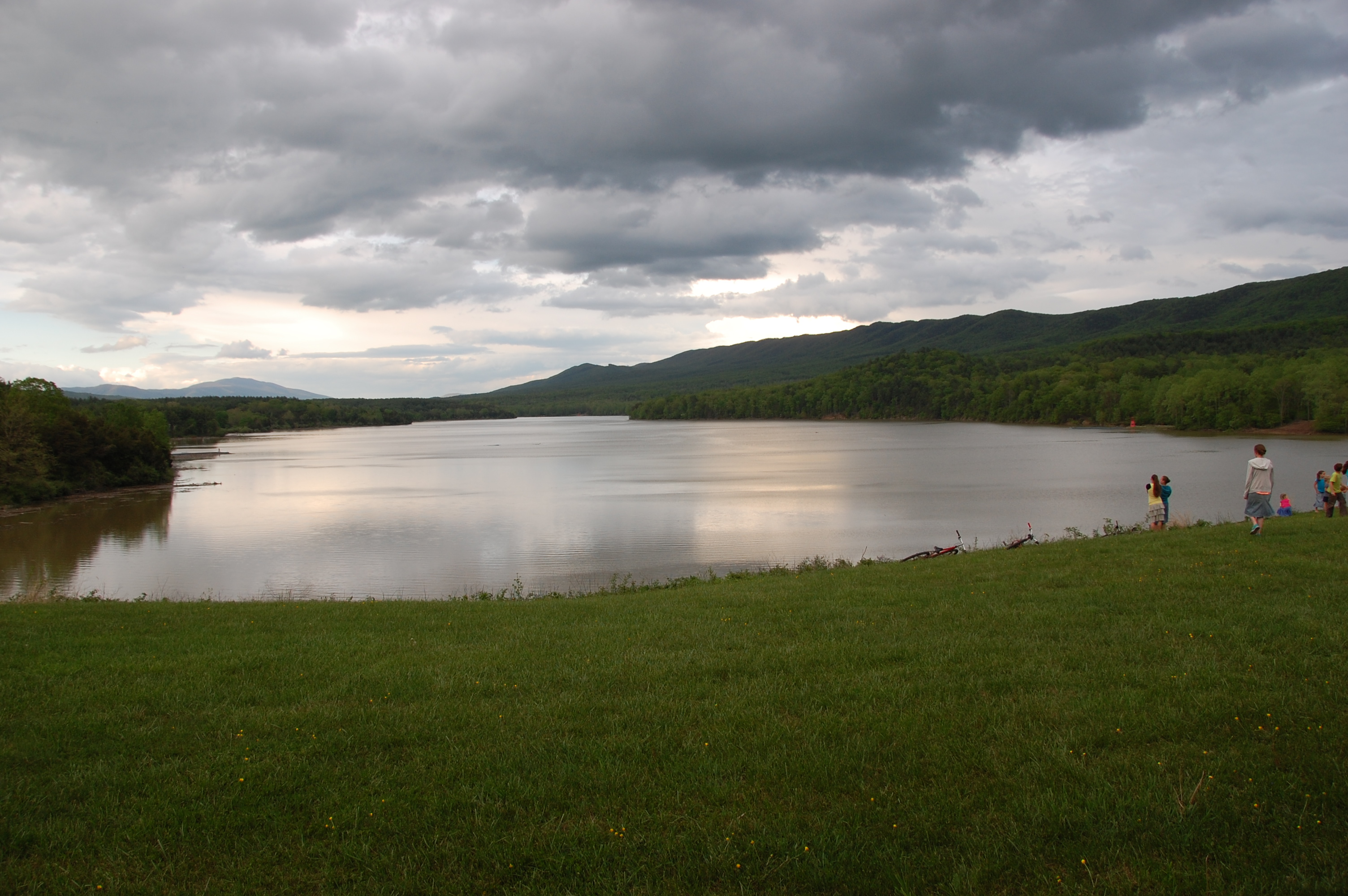 Sunday we spent a good while packing up all our stuff. Amazing how long it takes to pack up. I was very spoiled with our motorhome. We just put a few things away and slid in the slide-outs and went home. It didn’t help that Kolby wasn’t feeling good so that made it hard to pack up. Friday I had noticed Kolby had a low-grade fever but assumed it was from teething as his gums were swollen where his canines are coming in. He slept really well Thursday and Friday nights, not waking up until 8:30am., which is great for being in a tent. Saturday his fever was up and he acted like he didn’t feel good. I held him a good part of the day. Saturday night didn’t go well. I slept from about 1:00-4:45am, getting up to check on Kolby and Kaylin a couple times during that time. About 4:45am. Kolby woke up with a raging fever. He started twitching like Cooper did one time when he was little and got a double ear infection. Thankfully I had snagged Abby’s kids Ibuprofen before we headed to bed and was able to give that to him. He finally settled down and fell asleep around 5:45ish on my mat. I should have rented that kido out for a heater to ones who hadn’t brought enough blankets. He was cooking! I didn’t have a thermometer with me so don’t know how hot he was. I was able to get some sleep from 6:00-8:00am. Kolby had a fairly high fever all day long Sunday. 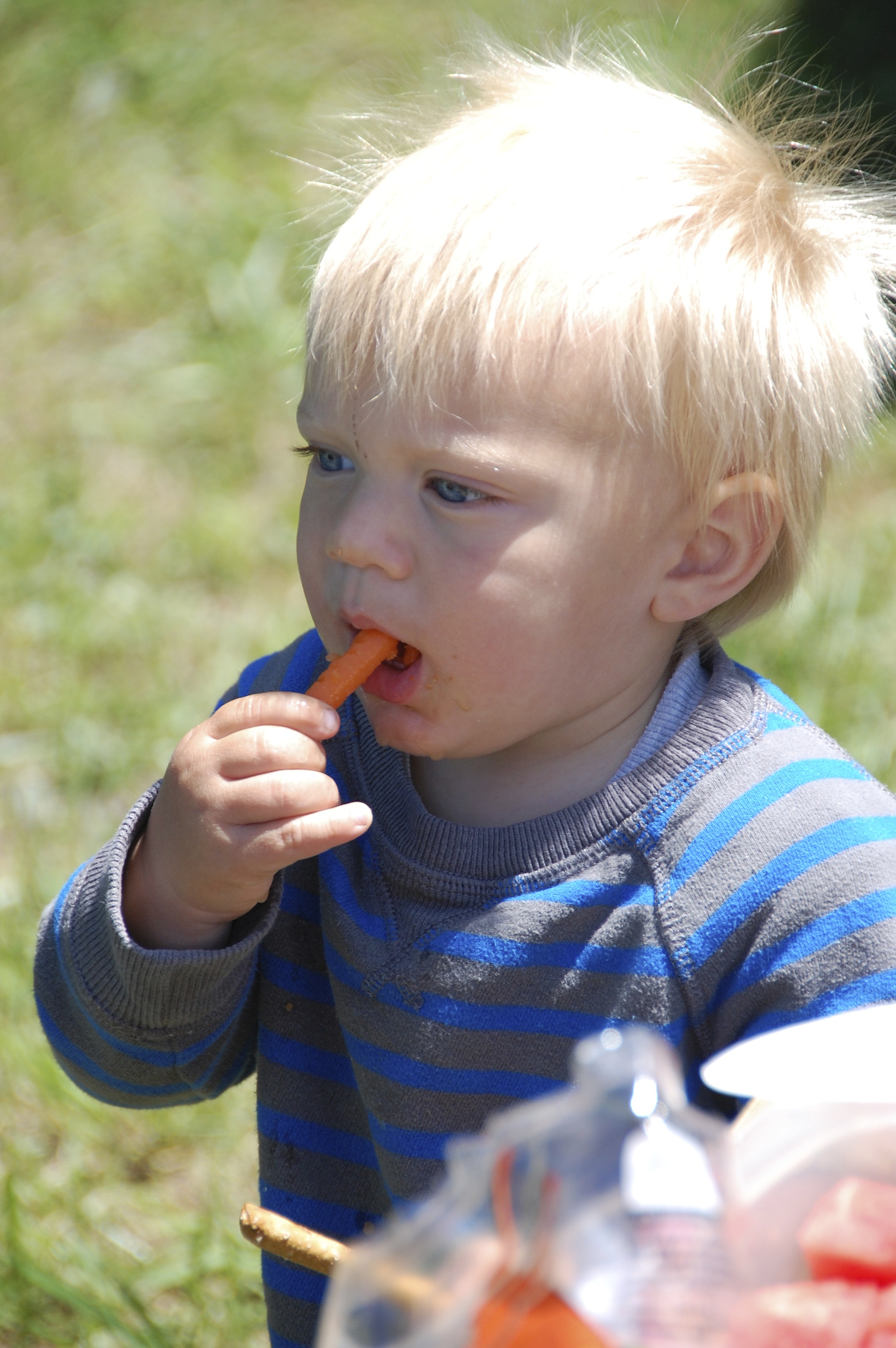 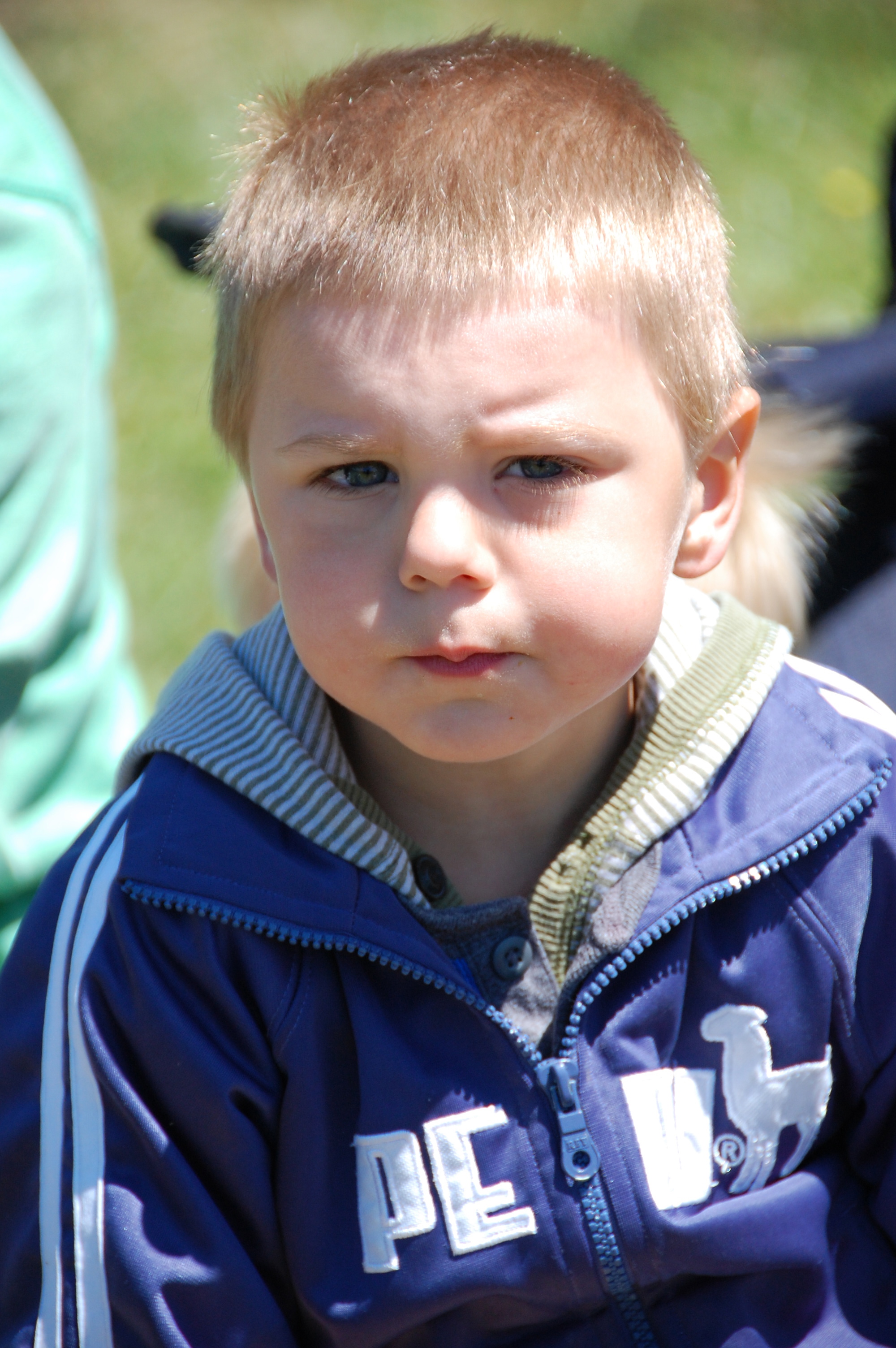 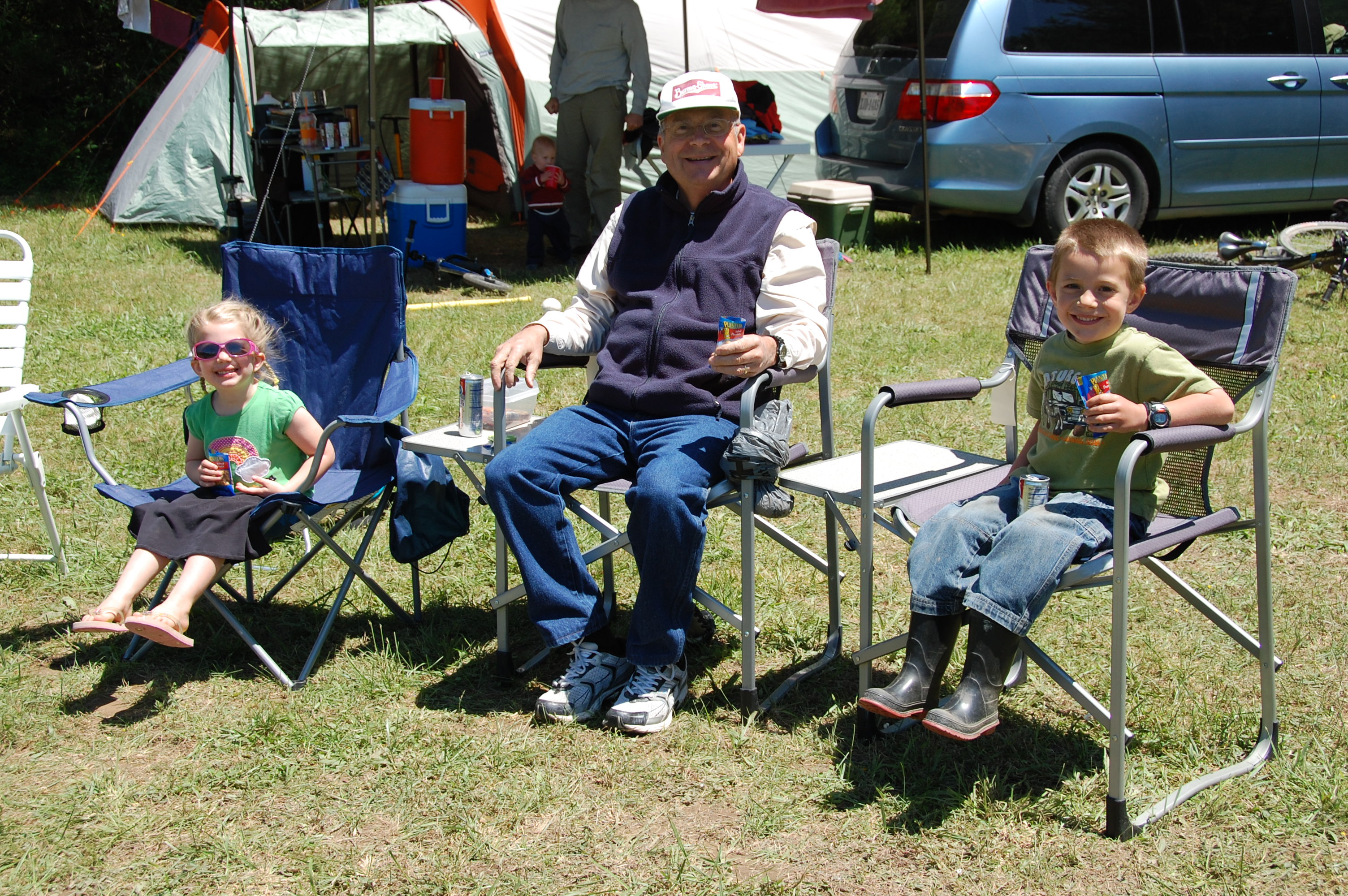 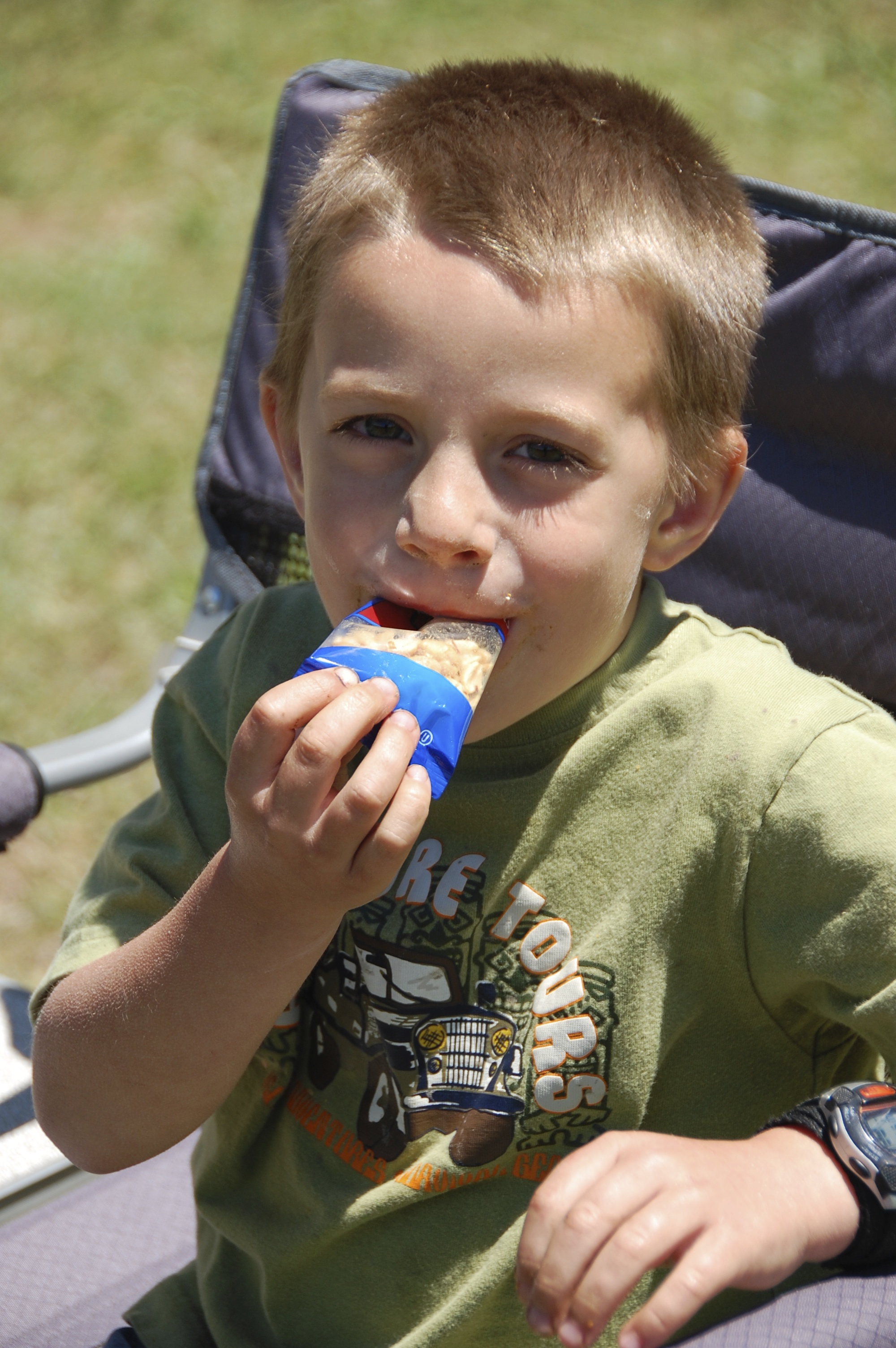 Proud of his own bag! 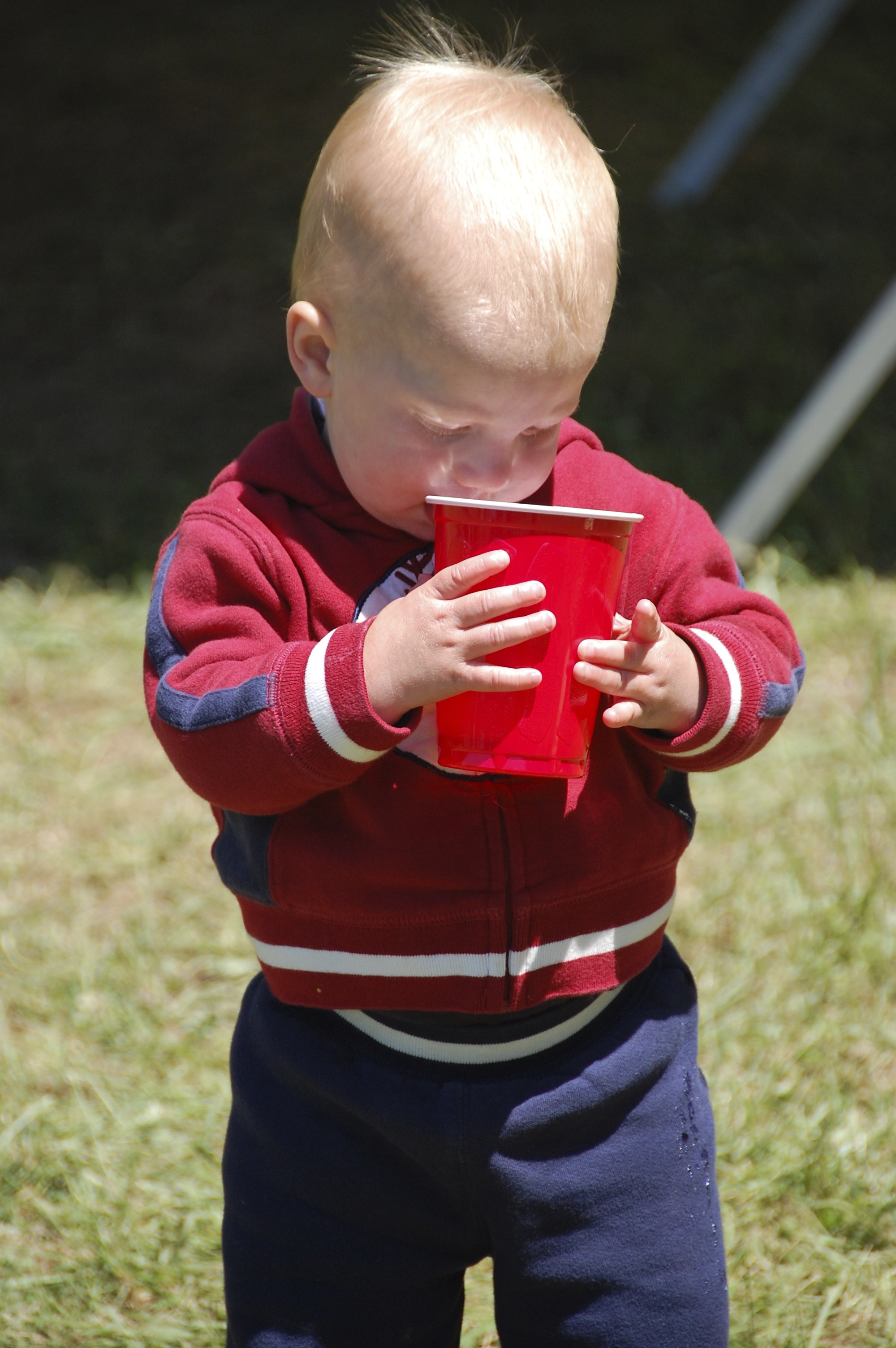 Kolby playing with his cup of water.

We headed home about 5:00 I believe. We grabbed dinner at Arby’s in Ruckersville and just took it home and ate. After dinner I got all the kids through the shower while Chester unloaded most of the van. I gave Kolby come Tylenol and put him to bed. Chester & I headed to bed around 10:30. Kolby woke up at 11:45pm. throwing up. We couldn’t give him more Tylenol so we did a round of Belladonna. Back to bed we went only to be awakened at 1 something. We gave Kolby some more Tylenol and headed back to bed. At 4 something I believe he was throwing up again. Poor guy, this is his first time of really being sick and throwing up ever! We were able to get a little more sleep before getting up for the day. Chester got up and got a Dr. appointment scheduled for Kolby for 11:40am. Then we got a call saying they had just had a cancellation and could we get him in there by 9. Chester ended up taking Kolby in so I could unpack the food and start getting stuff put away. Turns out Kolby has a mild case of Bronchitis. We were able to get him on medicine and by the end of the day Monday he seemed to be feeling a little better.