Thursday morning I got up and made granola bars and got finished up packing as well as I stripped all the beds and washed all the sheets. I was able to get all the sheets back on the bed except for Kaylin’s room before I made lunch and we loaded up to head to New York. Nate, Cheree, Camron, & Madison Seaborn arrived around 12:30. We got all loaded up and headed out around 1:20 pm. Nate & Cheree drove David Rutt’s 15 passenger van and our family took Rich and Tammi’s motorhome. (They had wintered it down here in case they wanted to travel during the winter as we don’t get as much snow as they do.) We stopped once for gas and then made a stop at McDonald’s for dinner. After that we got back on the road and arrived at Rich and Tammi’s around 10:00.

We had a very encouraging and fun time there. Lots of visiting, eating, playing, farm troubles, etc. happened. Friday, late morning we loaded up and went out to Letchworth State Park and hiked around and enjoyed the AMAZING scenery! It was BEAUTIFUL there. We are dreaming up a camp out up there sometime this year. We ran out of time and ended up not seeing all the waterfalls before we had to head back to the house. That evening was their homeschool basketball night so we got to join in on that. After that was over we came back for a pizza dinner. 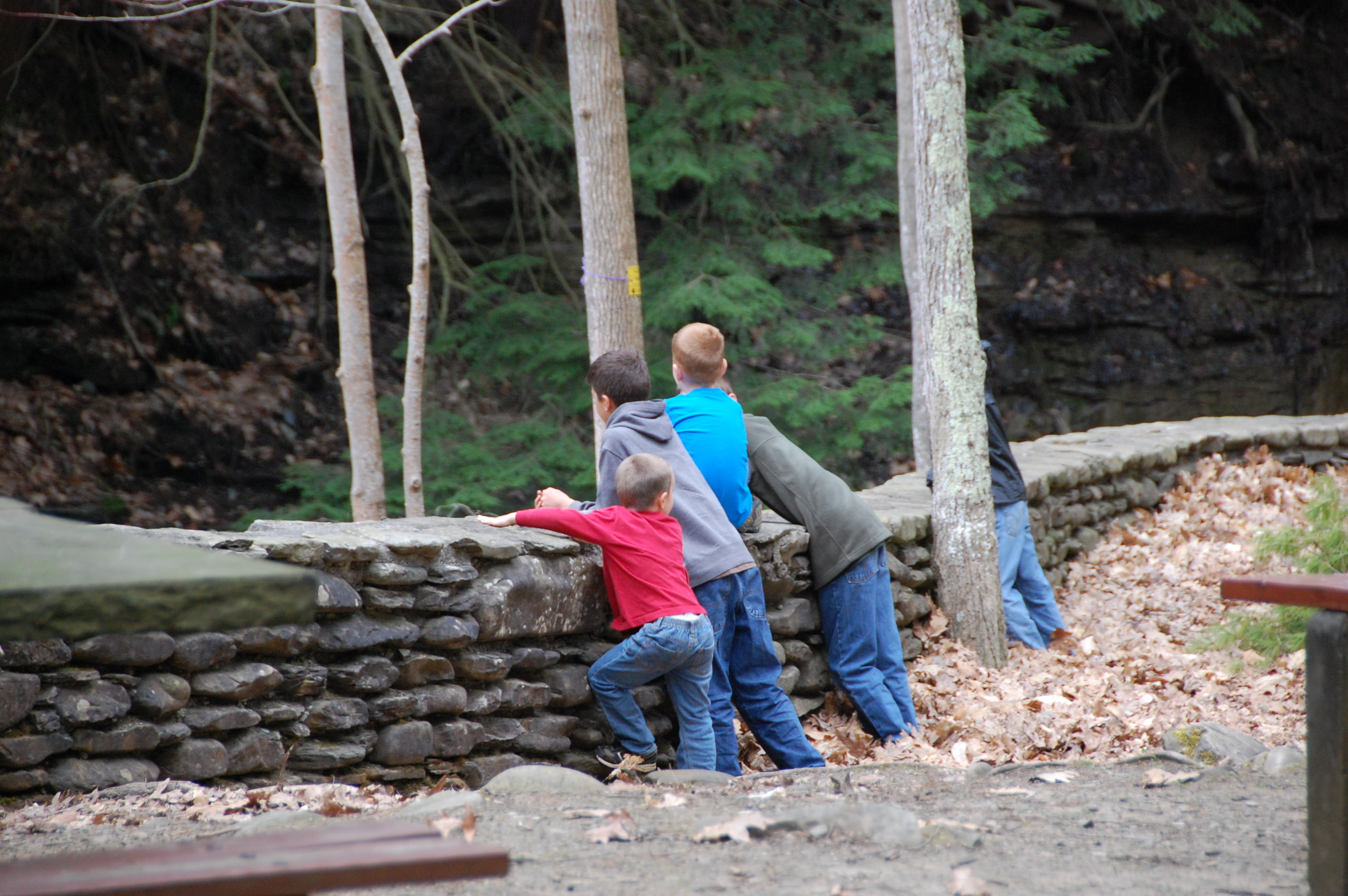 The boys checking out the waterfalls. 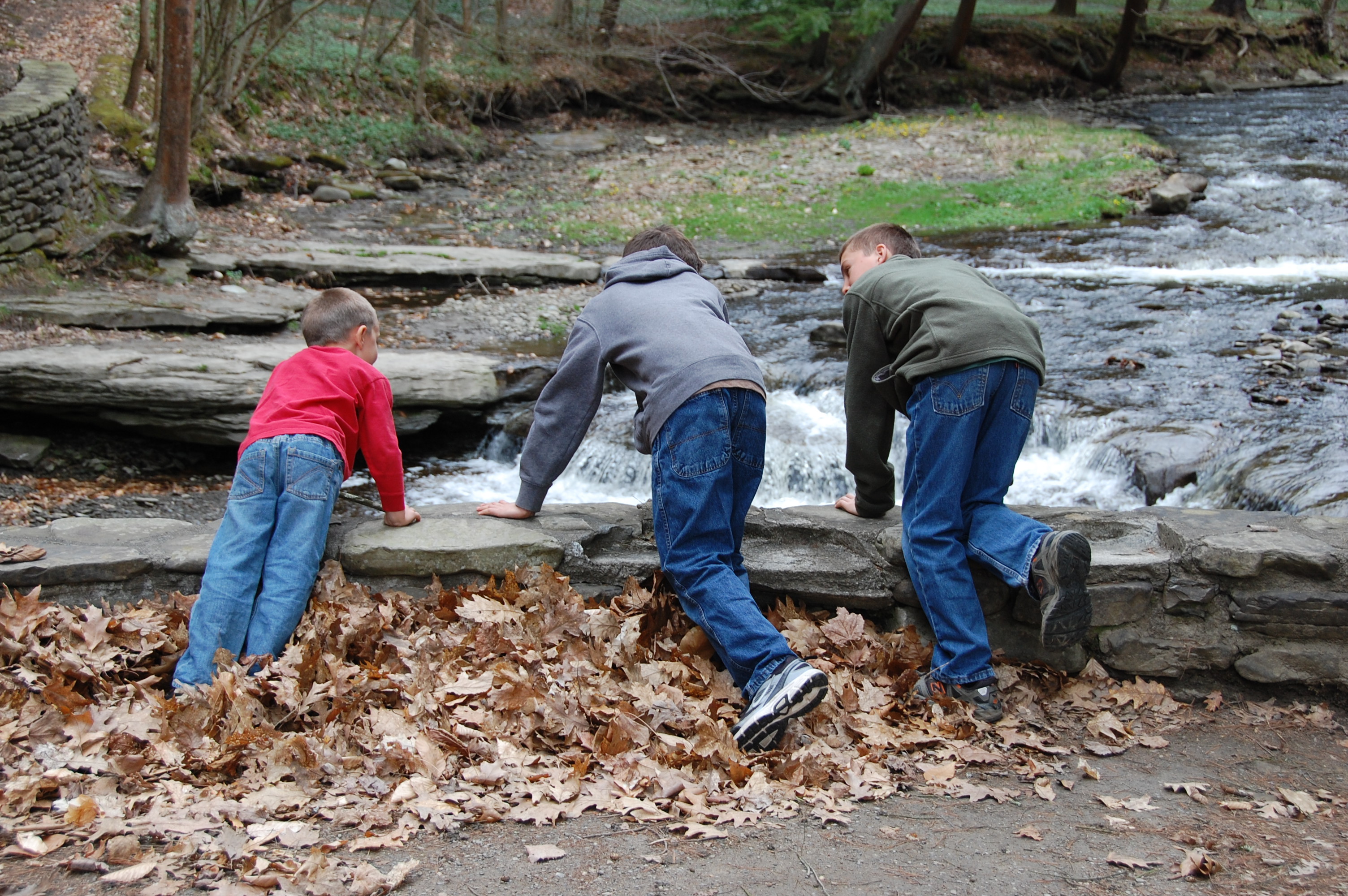 Trying to fall in. 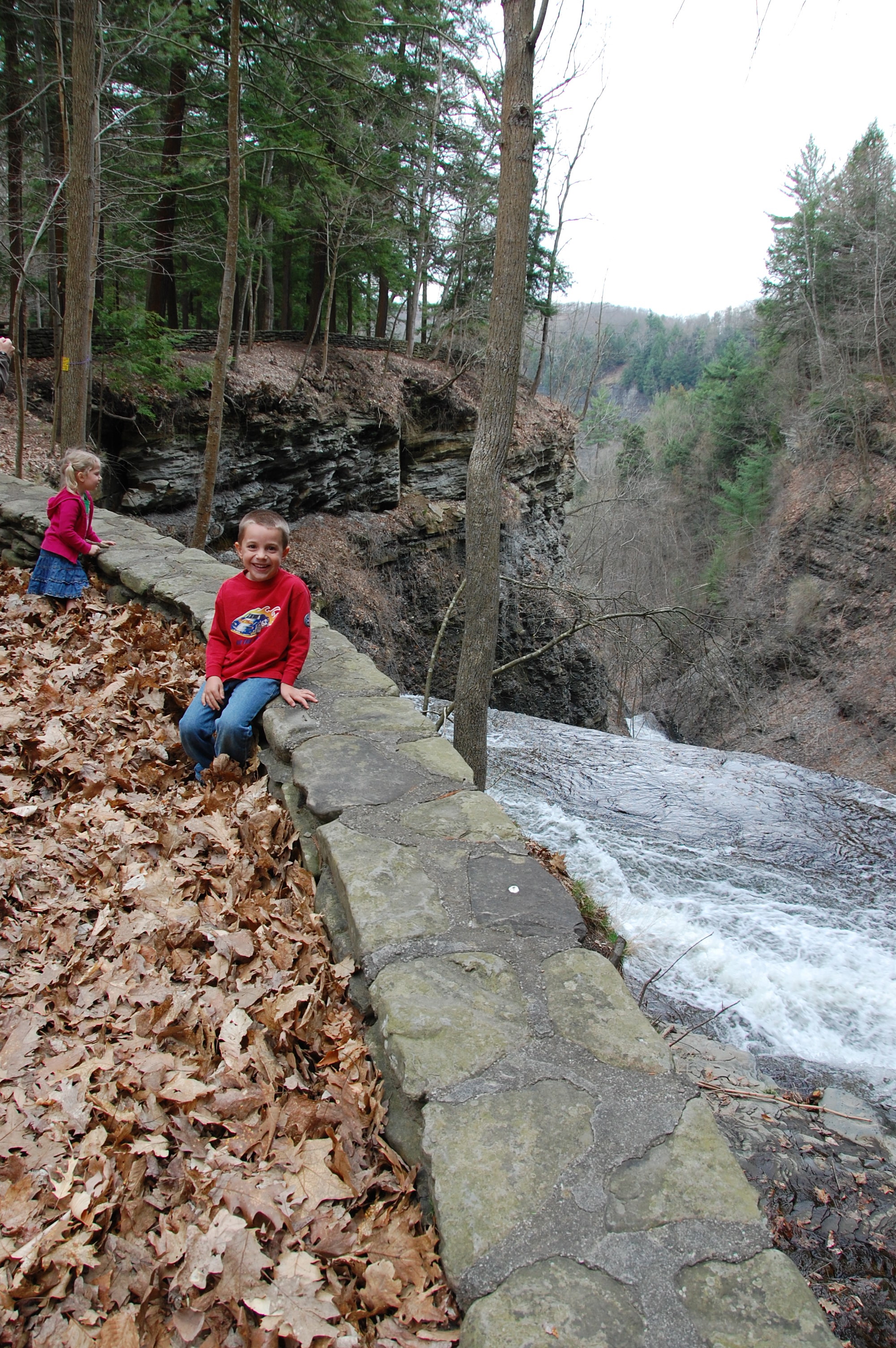 Bryant at the falls. This fall was HUGE. You just can’t tell by the picture. 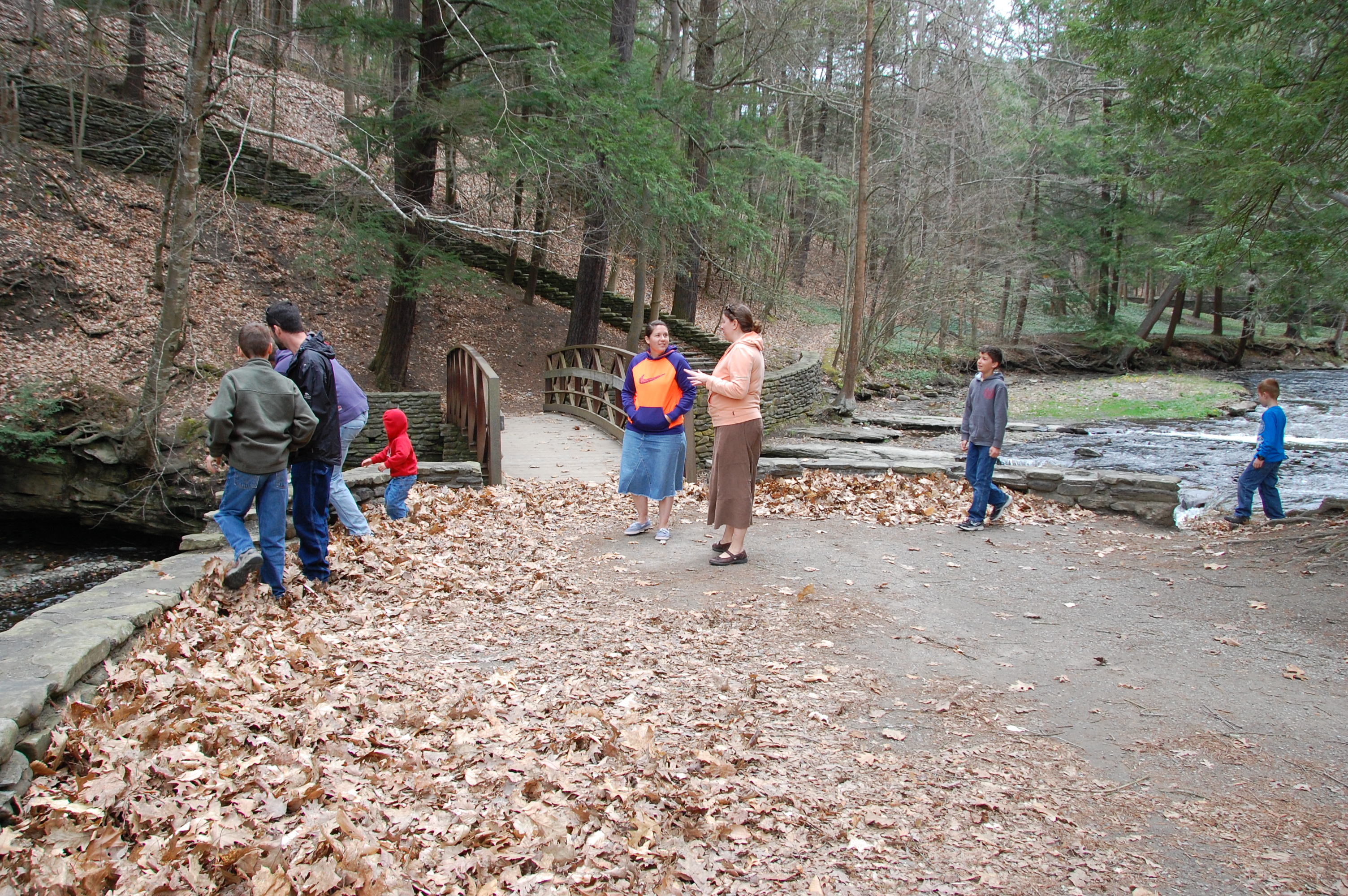 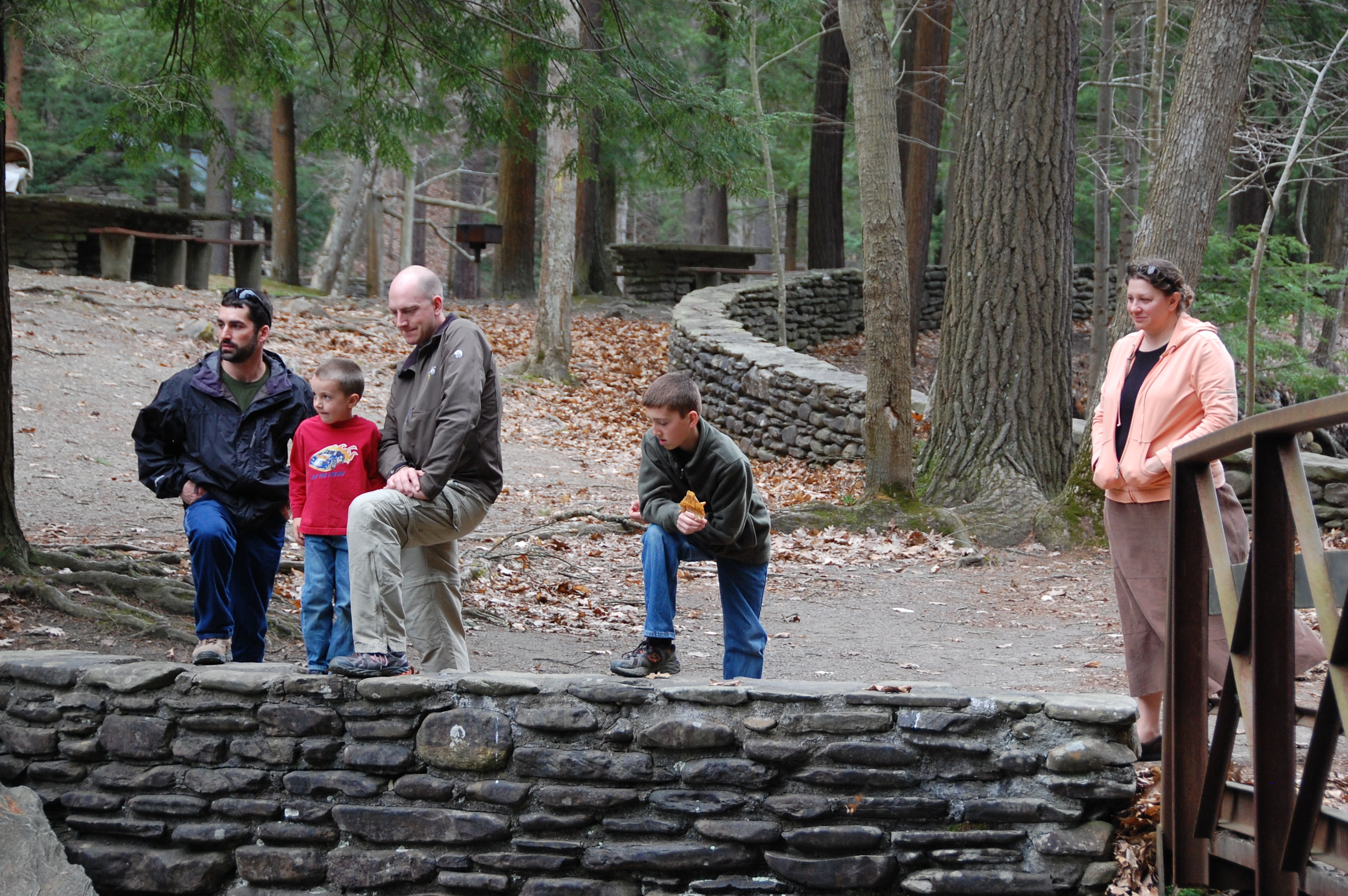 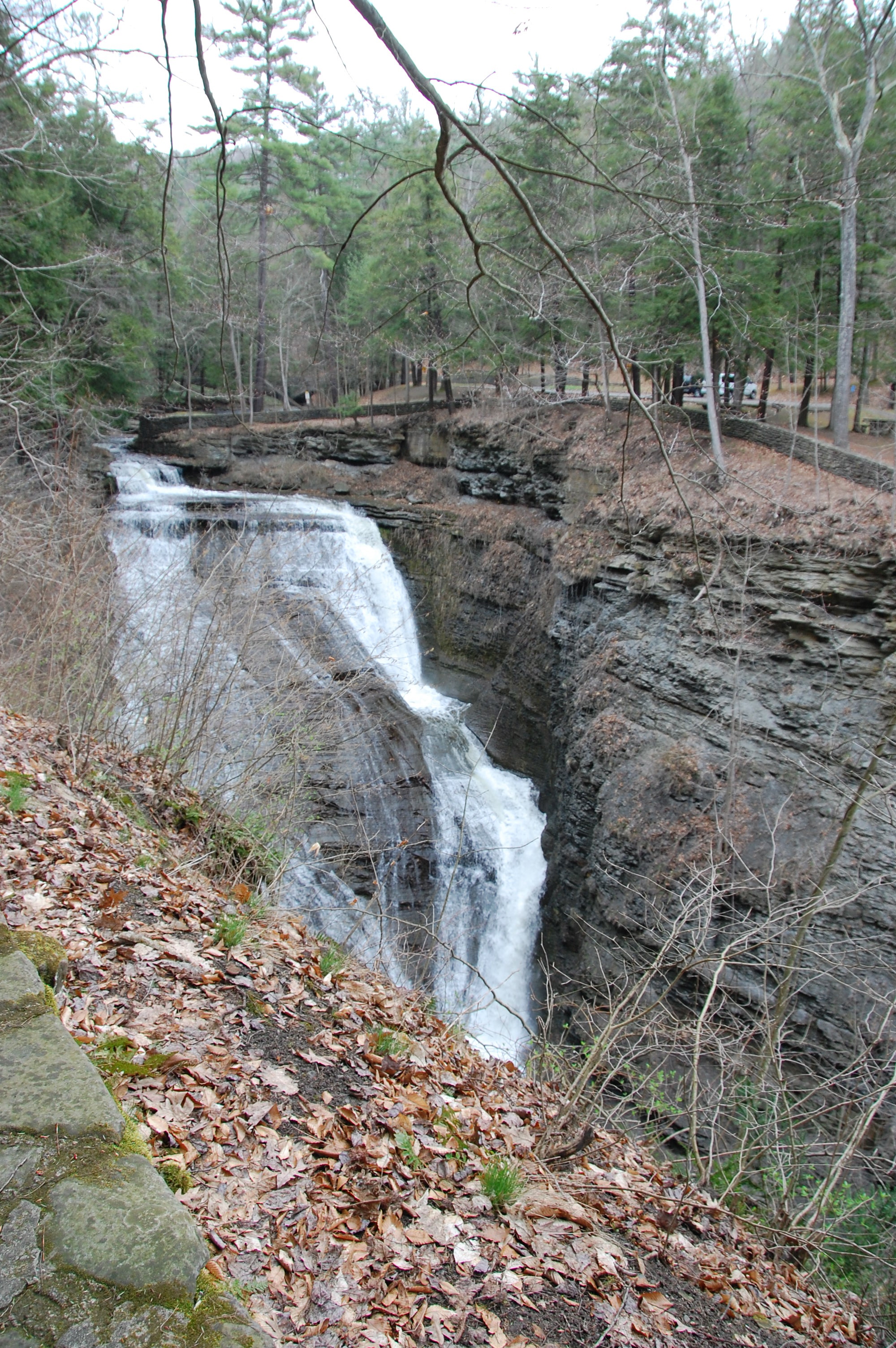 I wanted a picture of the falls but was trying to keep Kolby from climbing over the fence so this was as good as I could do. 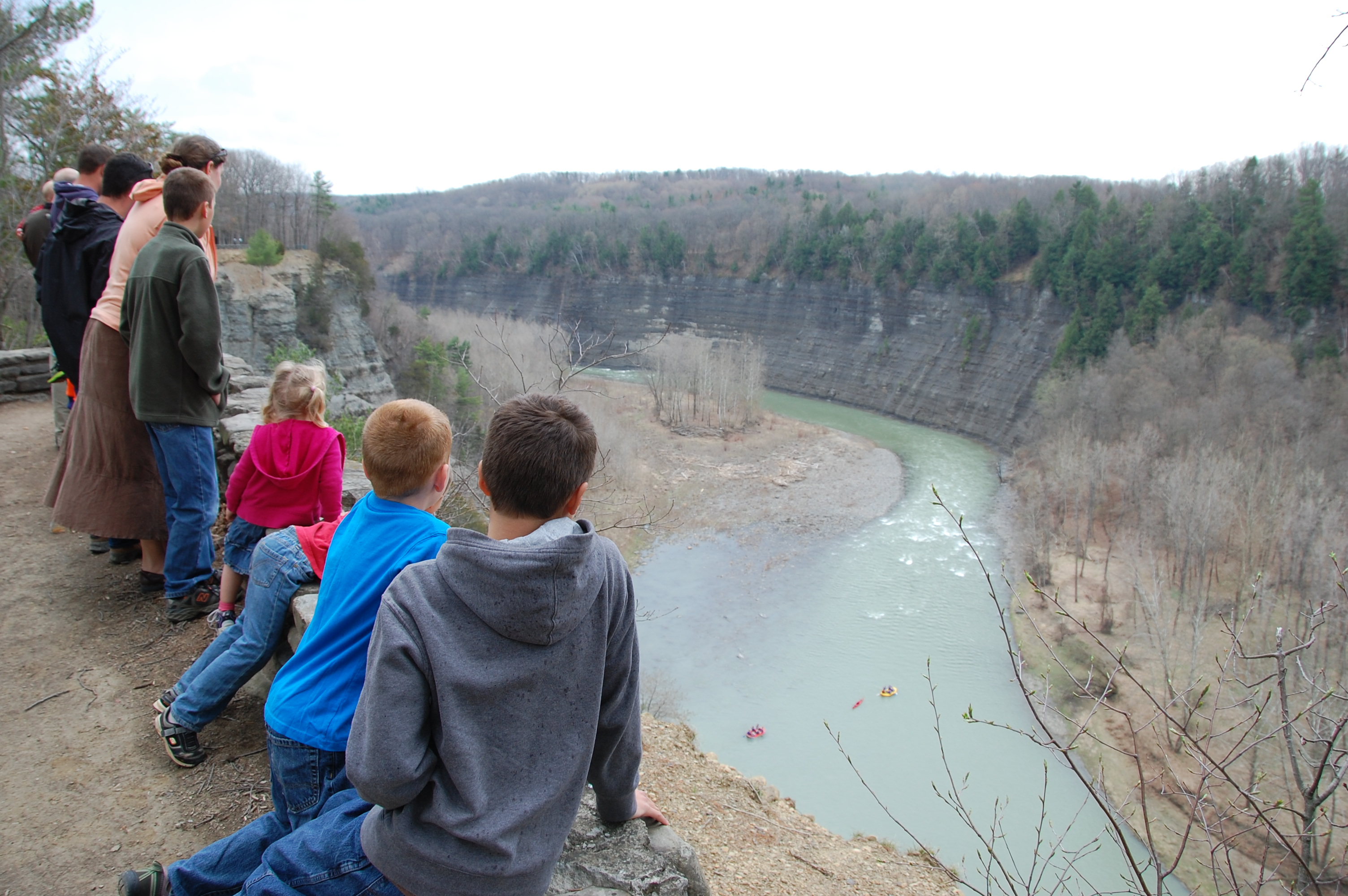 Watching some rafters going down the river WAY DOWN there. 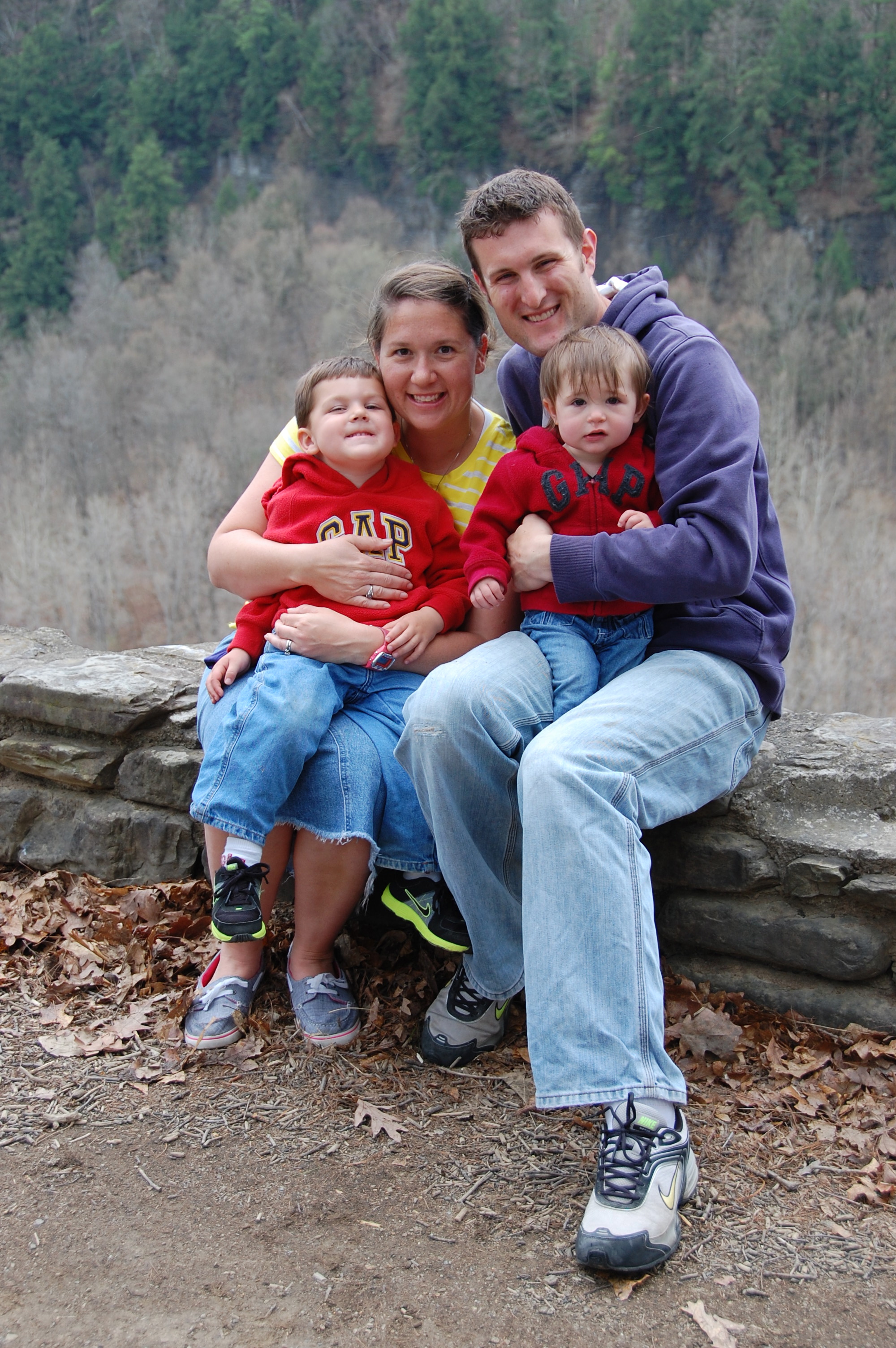 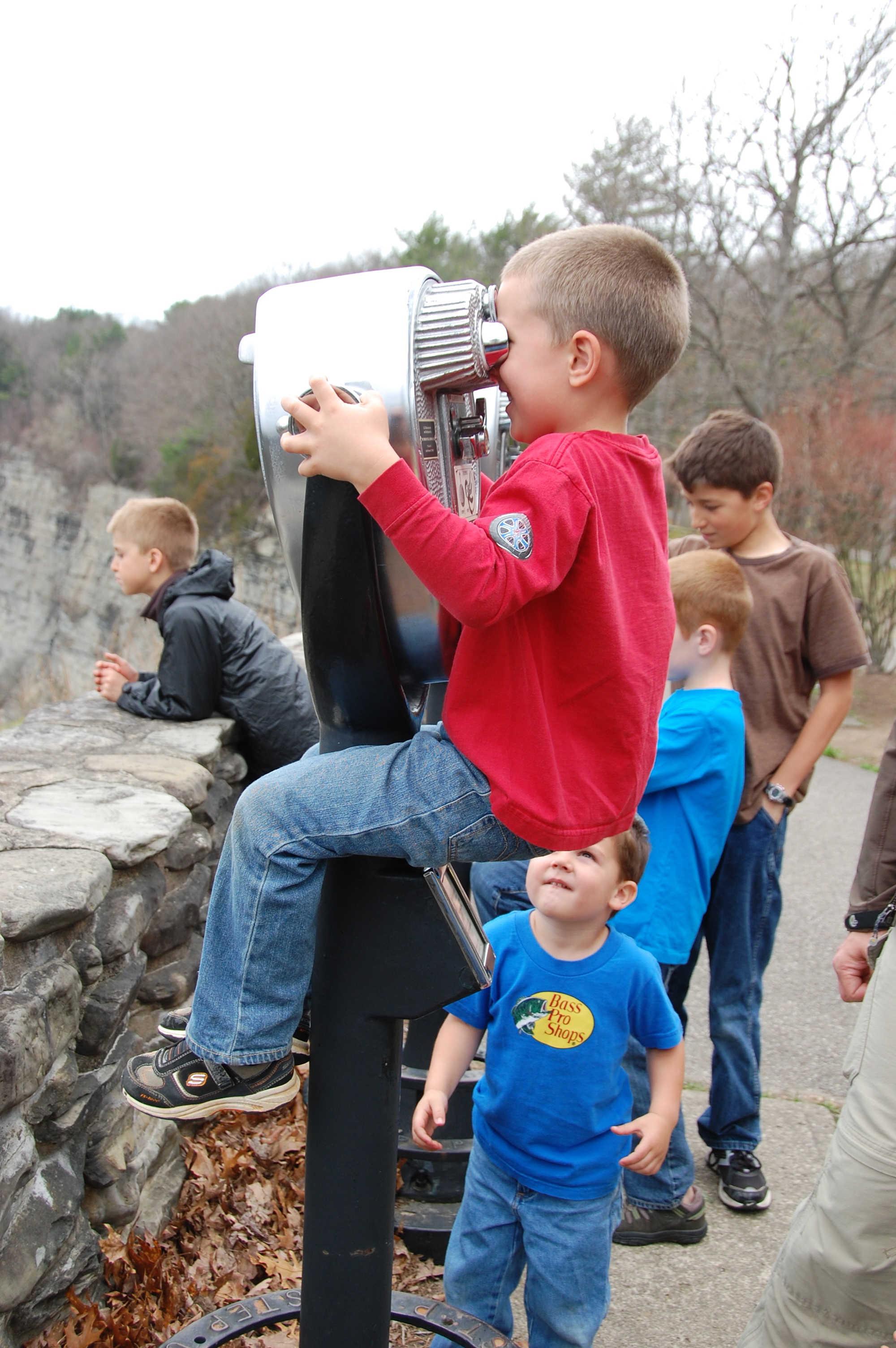 What is it? There’s more than one way to skin a cat…Bryant wanted to see out so he just climbed up. 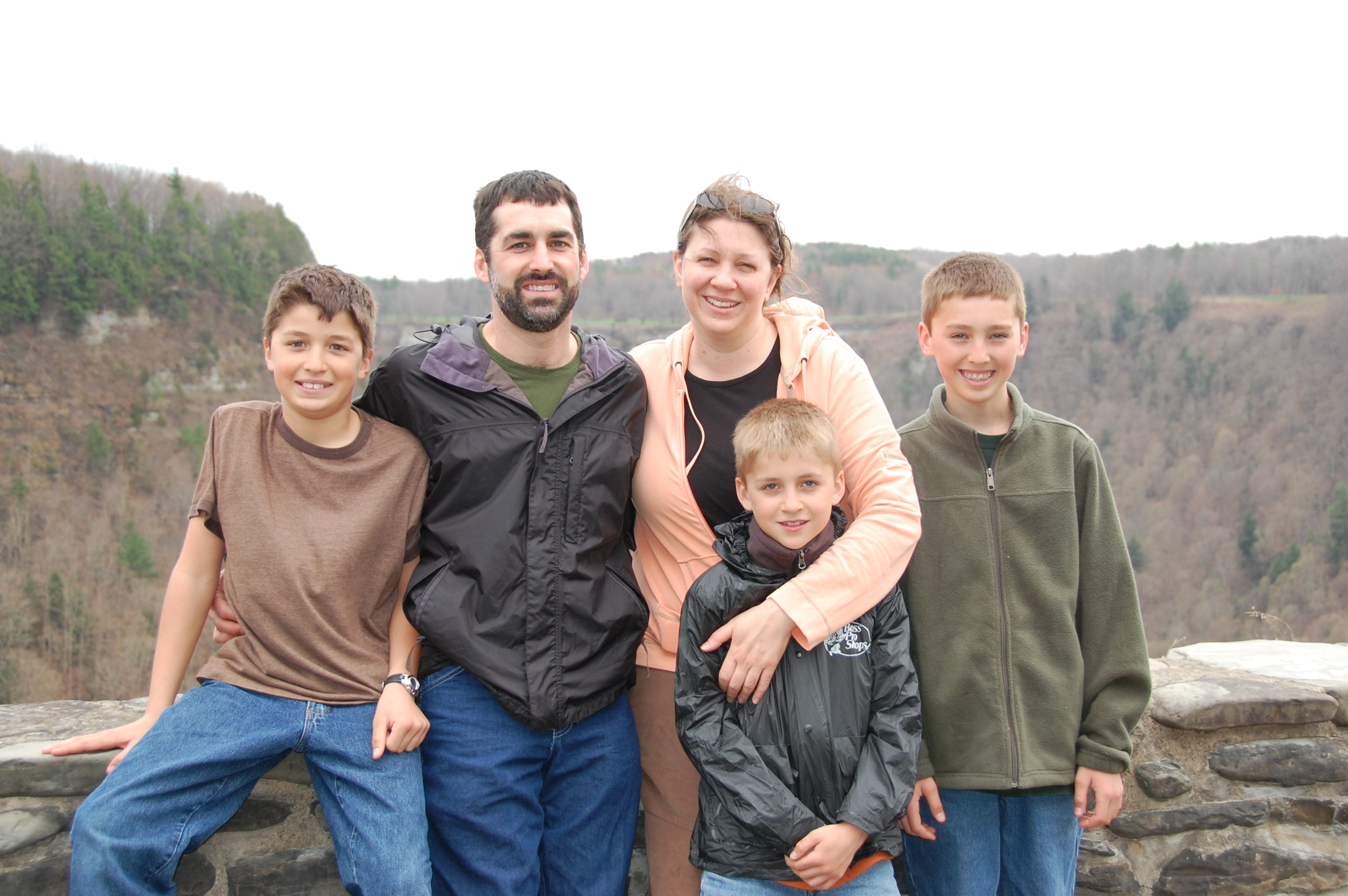 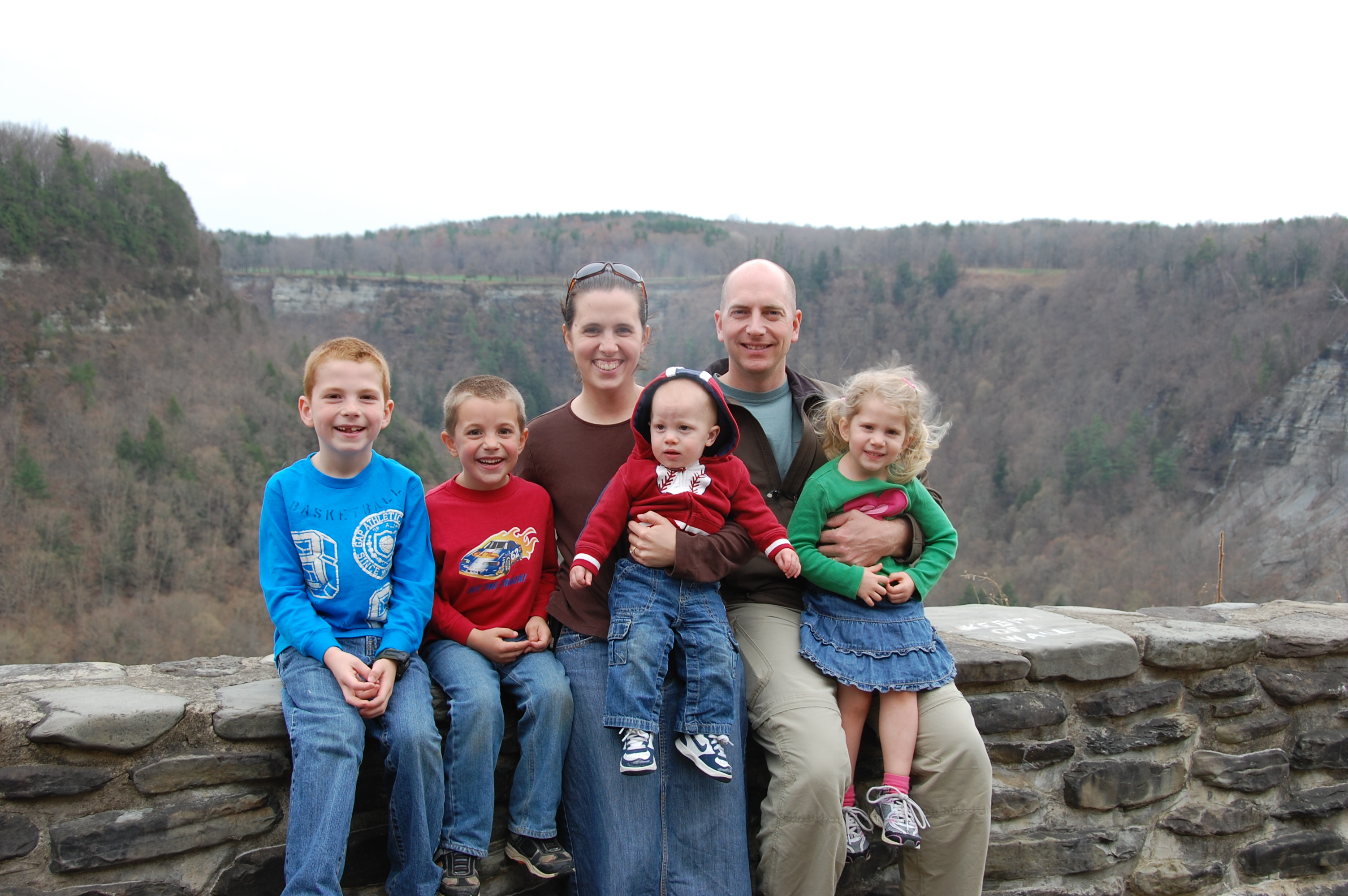 And then our family! 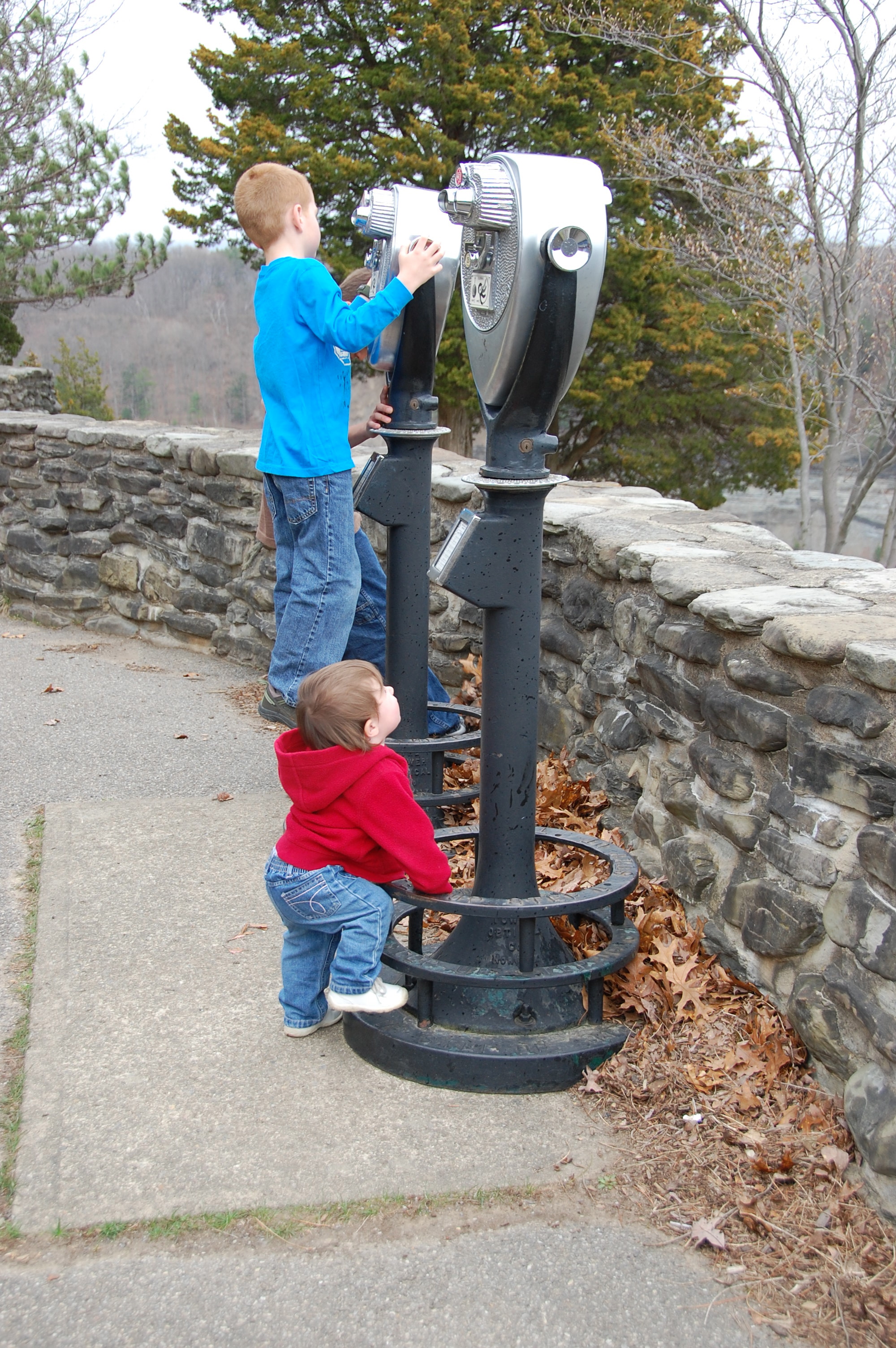 Madison trying to figure out how to get up where she could see out. 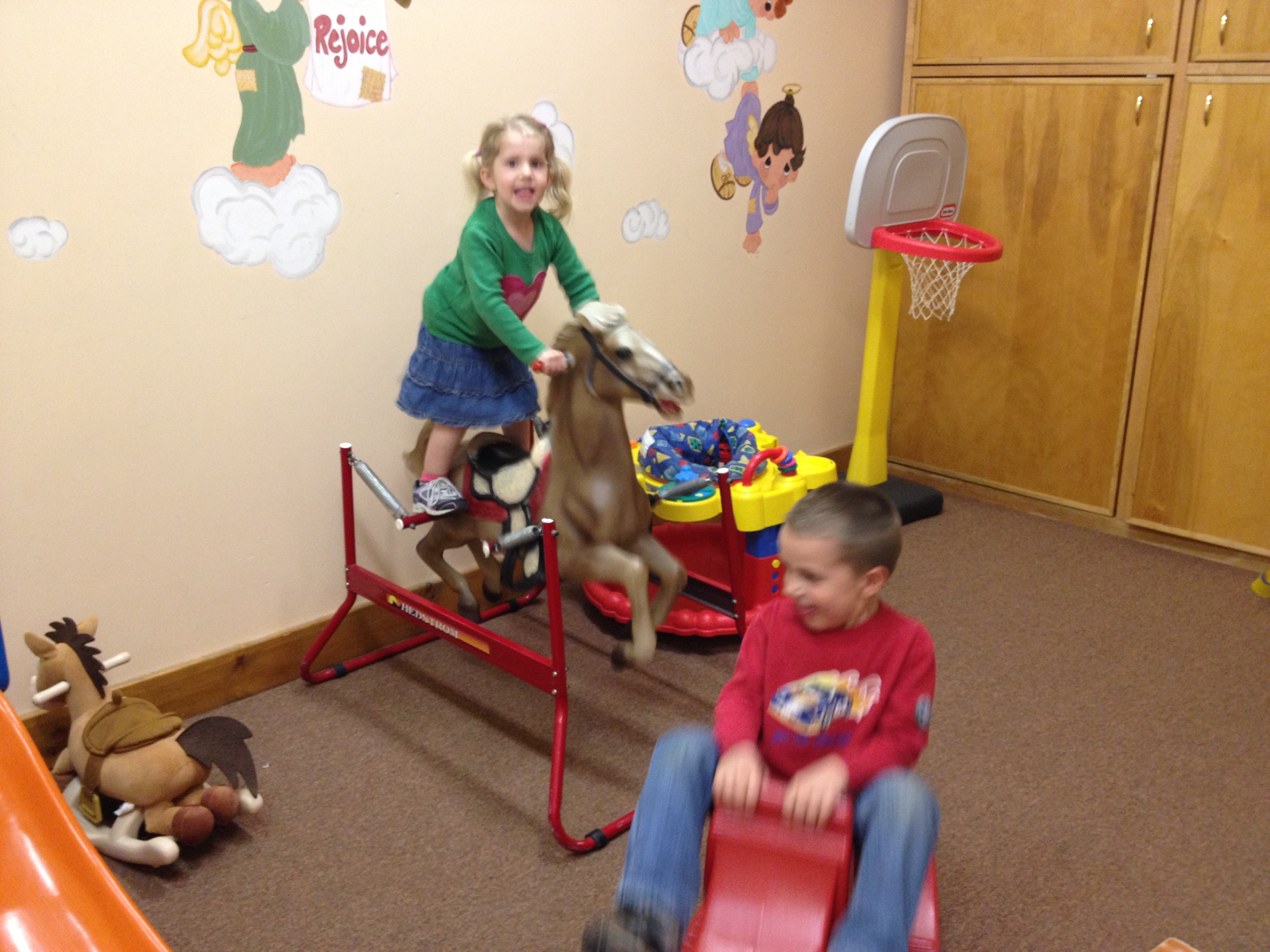 During basketball the kids played in the nursery & had a blast. 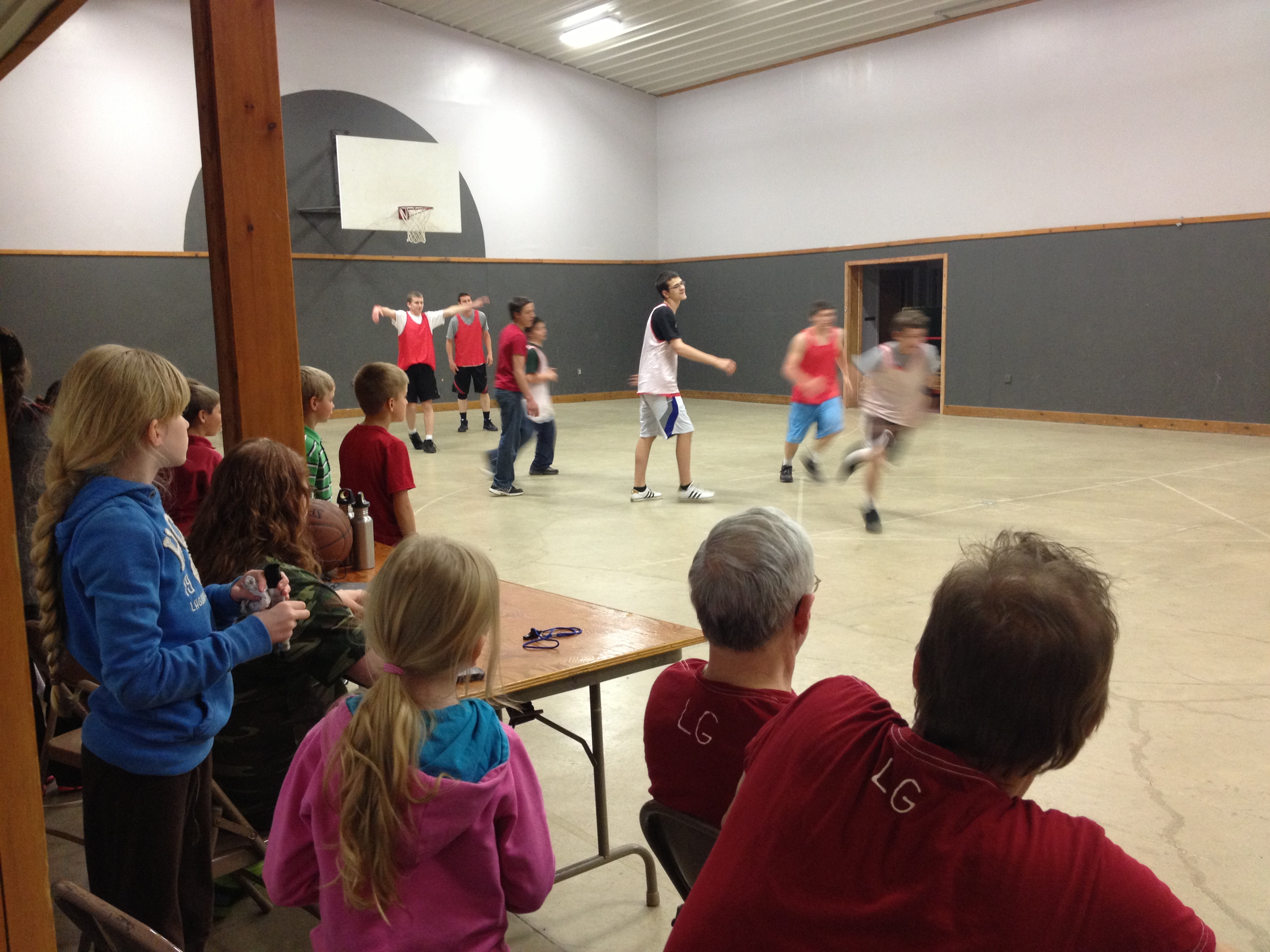 The only picture I got of the basketball playing. I’ll have to see what pictures Cheree got.

Saturday we woke up to snow on the ground and the wind was COLD! One of their calves was sick so the guys spend a fair amount of the day tending to it. Meanwhile their two cows decided that they no longer liked to stay within their fence, so they were chased and put back in 3 times that day. Rich’s parents stopped by for a visit that afternoon. It was good to see them again. The boys enjoyed driving the little 4-wheeler. It was so cute to see them driving around on it. That evening after dinner Matt & Kelly Buck and their children came over. The kids had a blast playing games, Nerf war, etc. The guys worked on Rich’s electric fence some more before giving up and coming inside to visit. We enjoyed Matt’s stories about opportunities he has had at work as a Prison REC Organizer (I’m sure that is not his official title.) Poor Bryant was tuckered out and fell asleep in the middle of the living room floor amid all the talking and laughing. 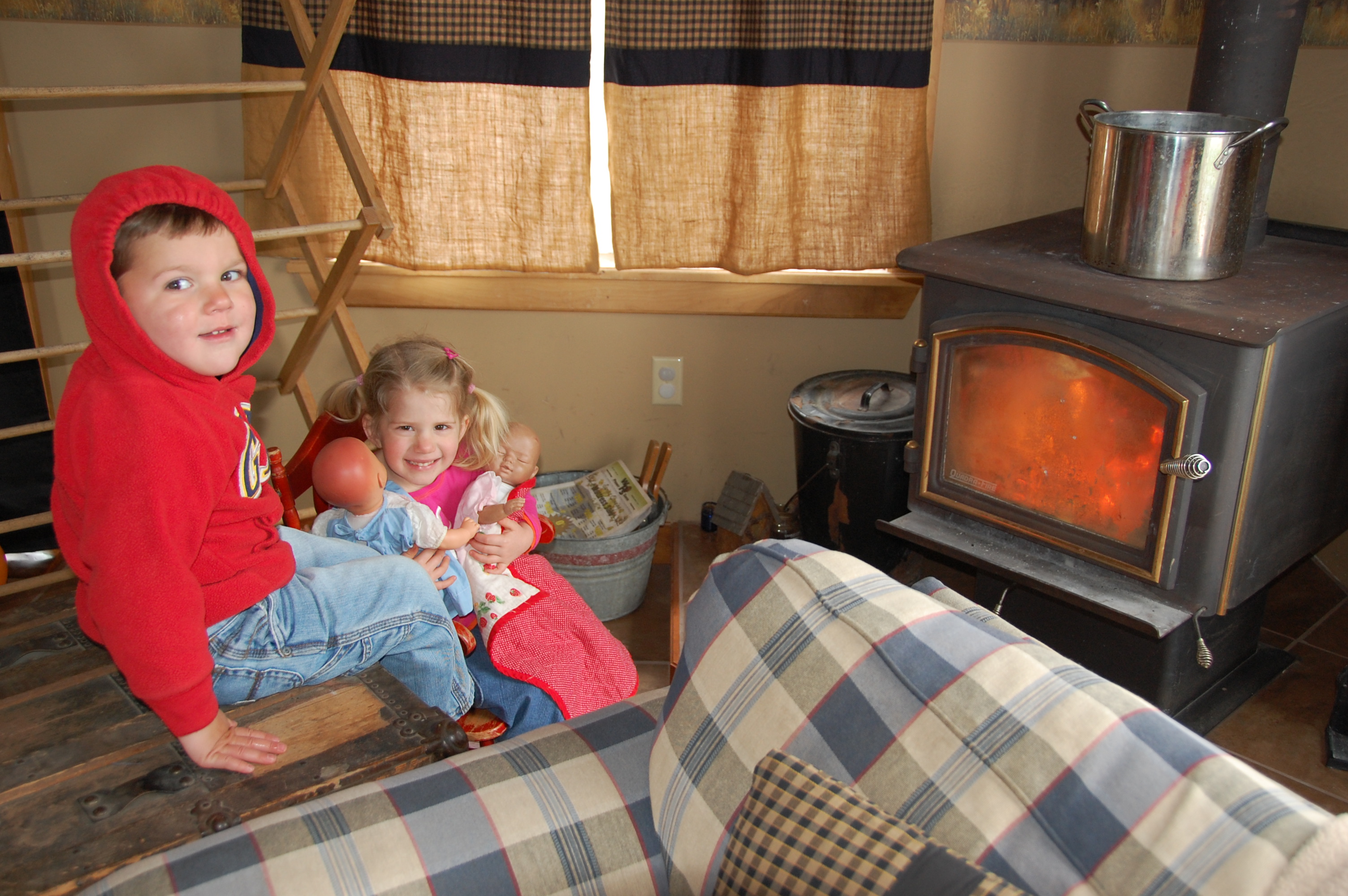 Kaylin & Camron warming up by the stove. 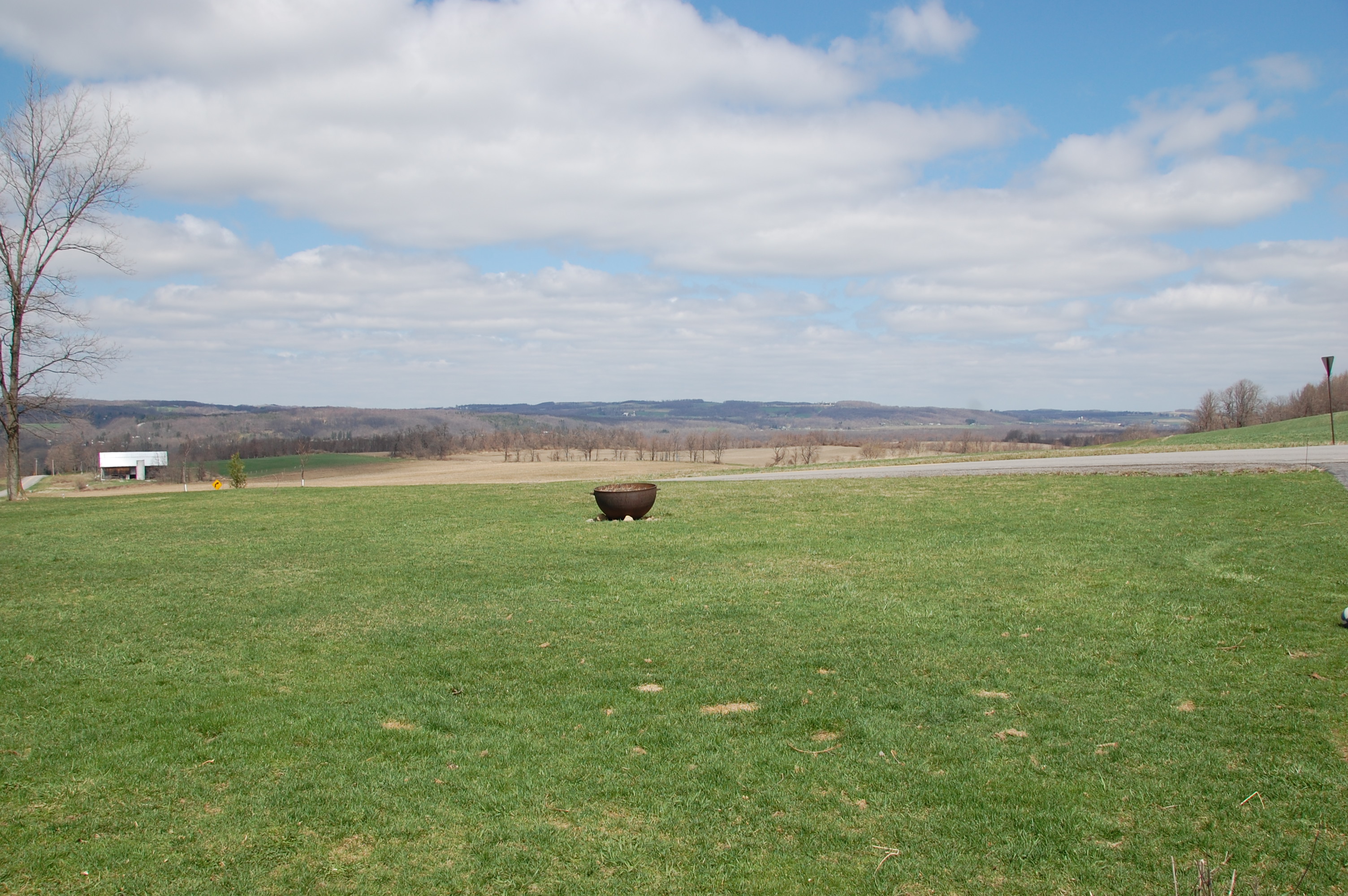 The Wilson’s view out the front of the house. 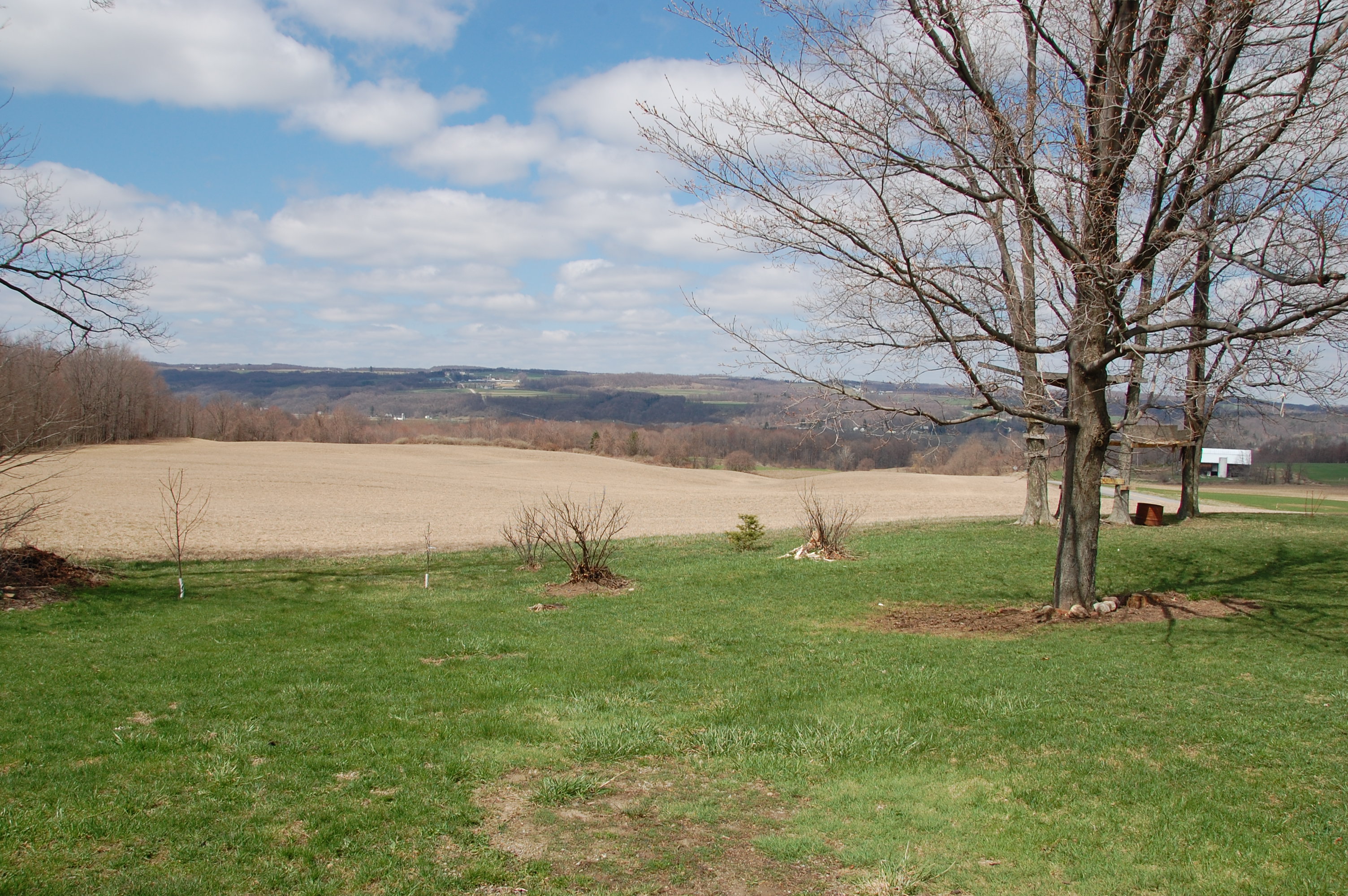 The view out Tammi’s kitchen window. Big farms all on the hillside. 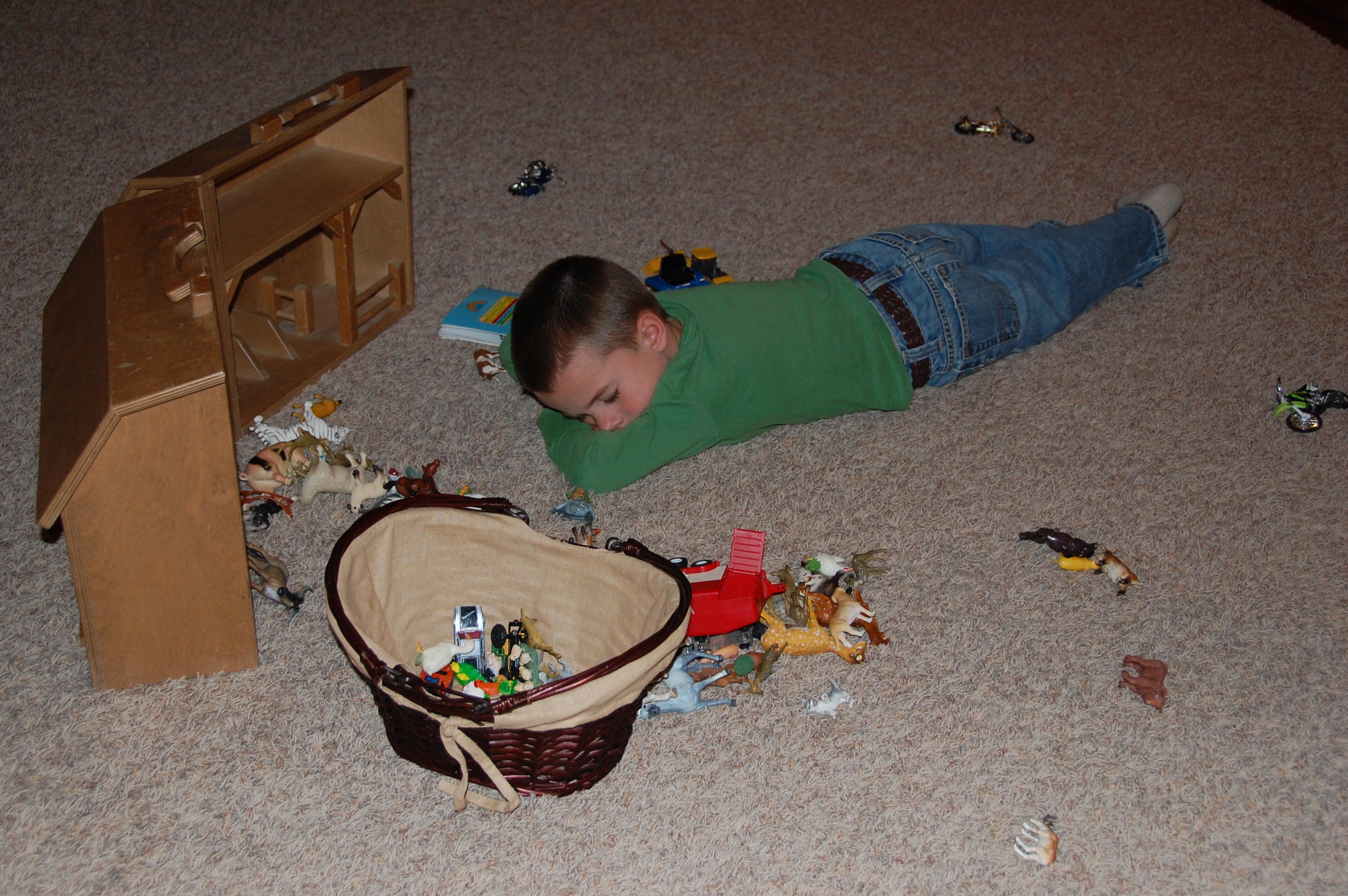 Sunday we enjoyed more visiting. The guys were able to get the electric fence all fixed and working properly and the calf seemed to be feeling better so it was a much better day on the farm.

The boys once again got out the 4-wheeler and the little motorcycle and had a blast riding around. Everyone cleaned up and we had dinner and then had to pack up to head home. 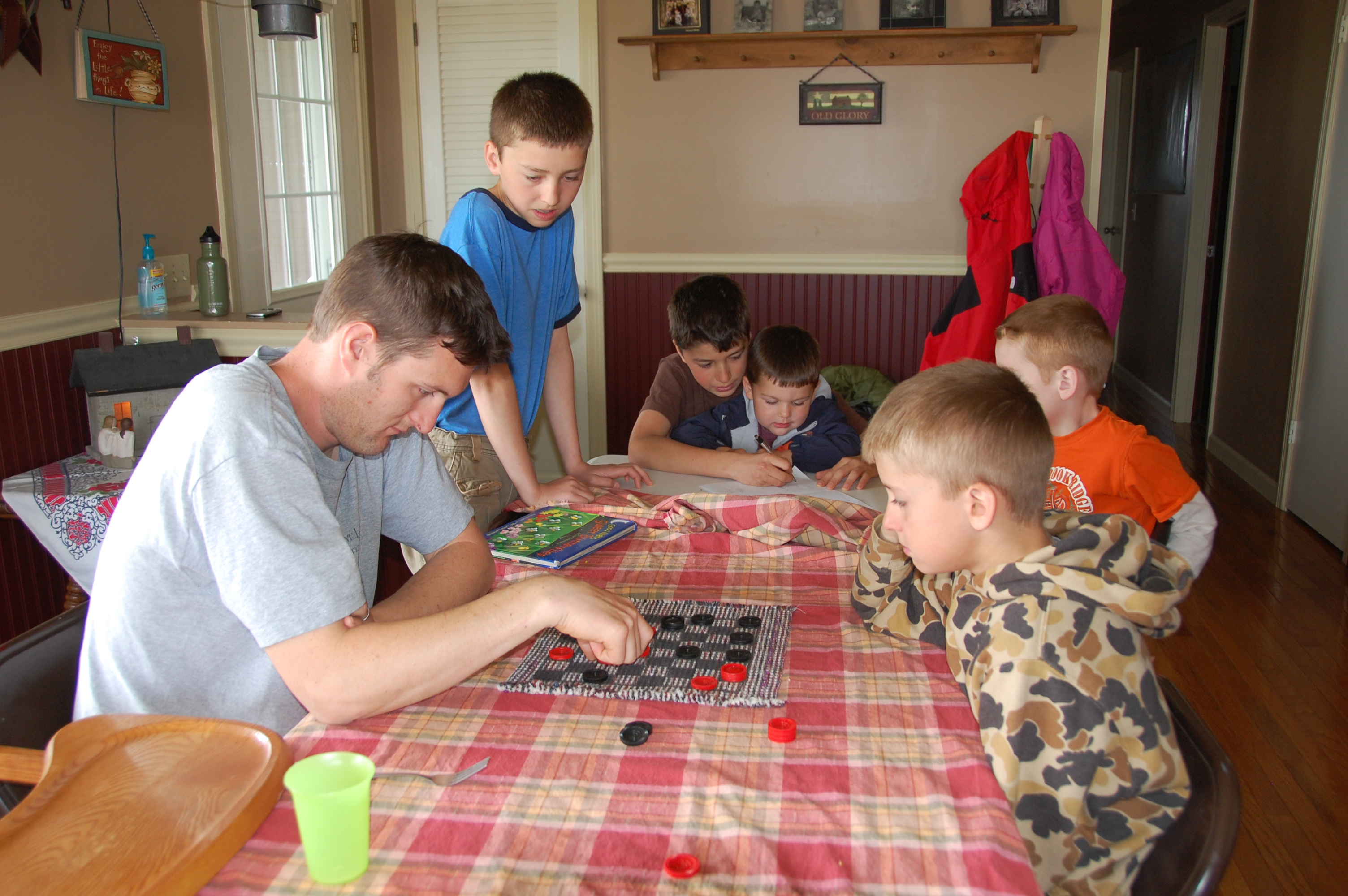 The boys and Nate playing games. 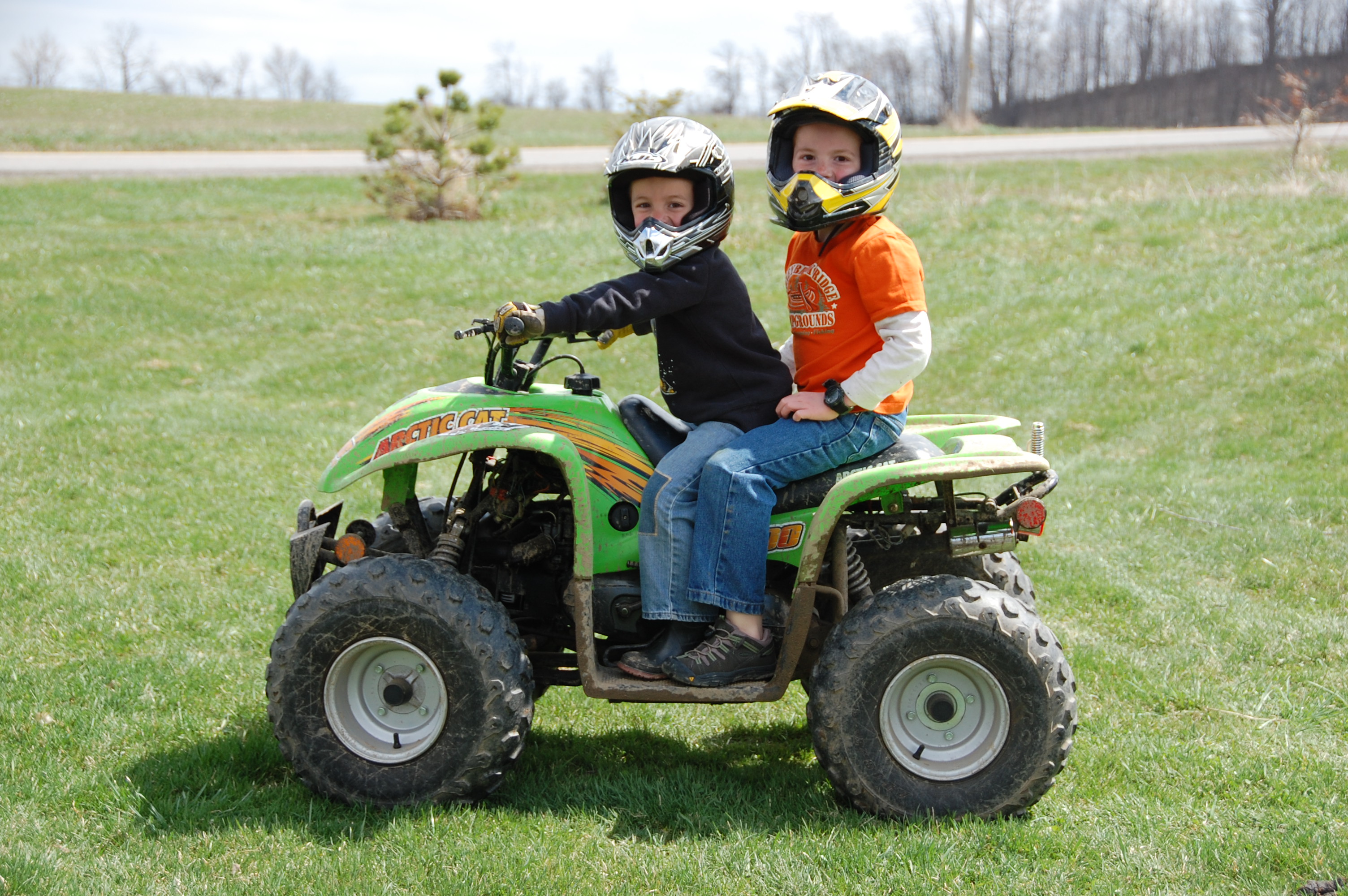 Bryant giving Cooper a ride on the 4-Wheeler. 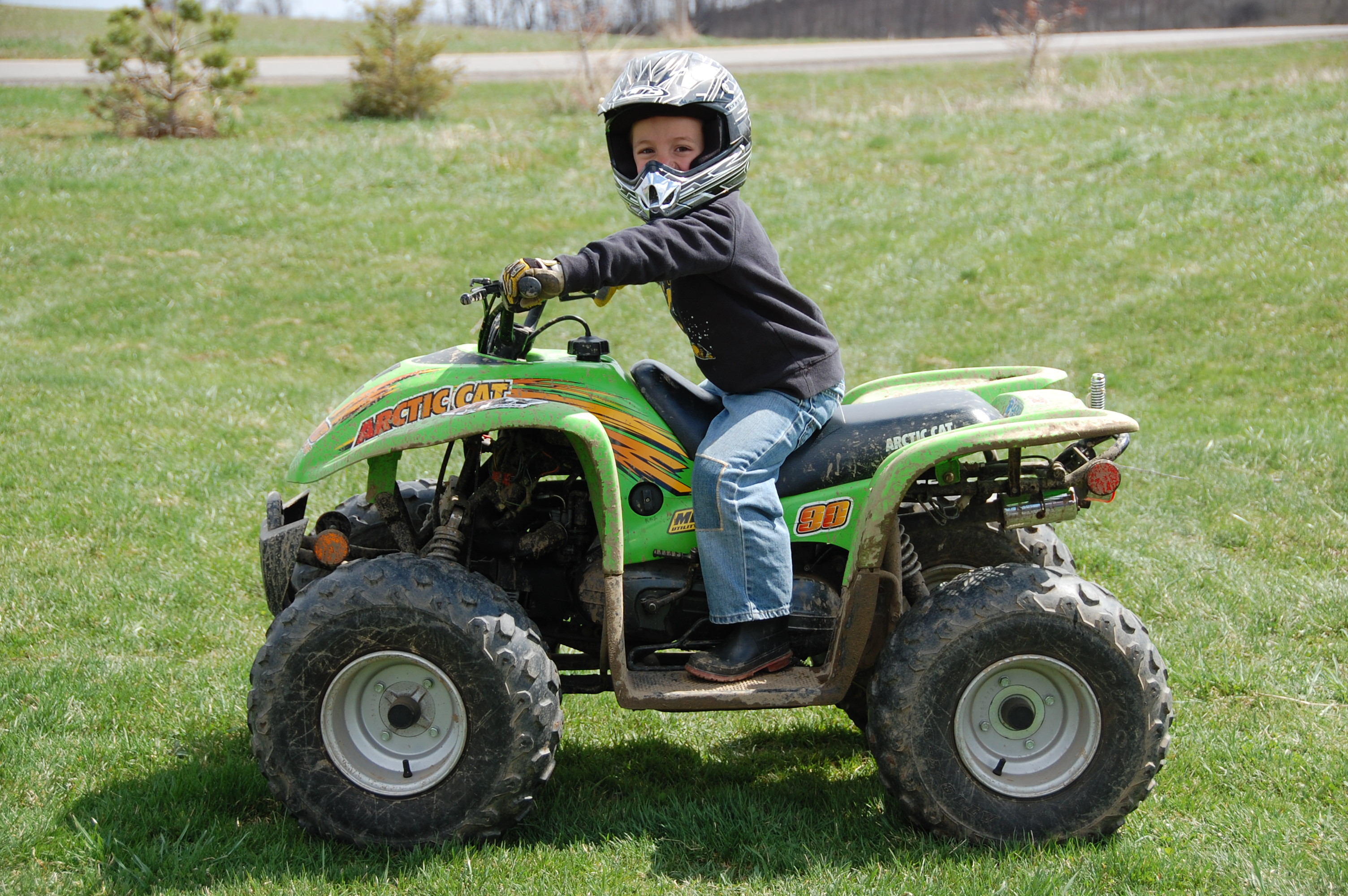 Bryant couldn’t quit grinning while he was riding! He was SO PLEASED! 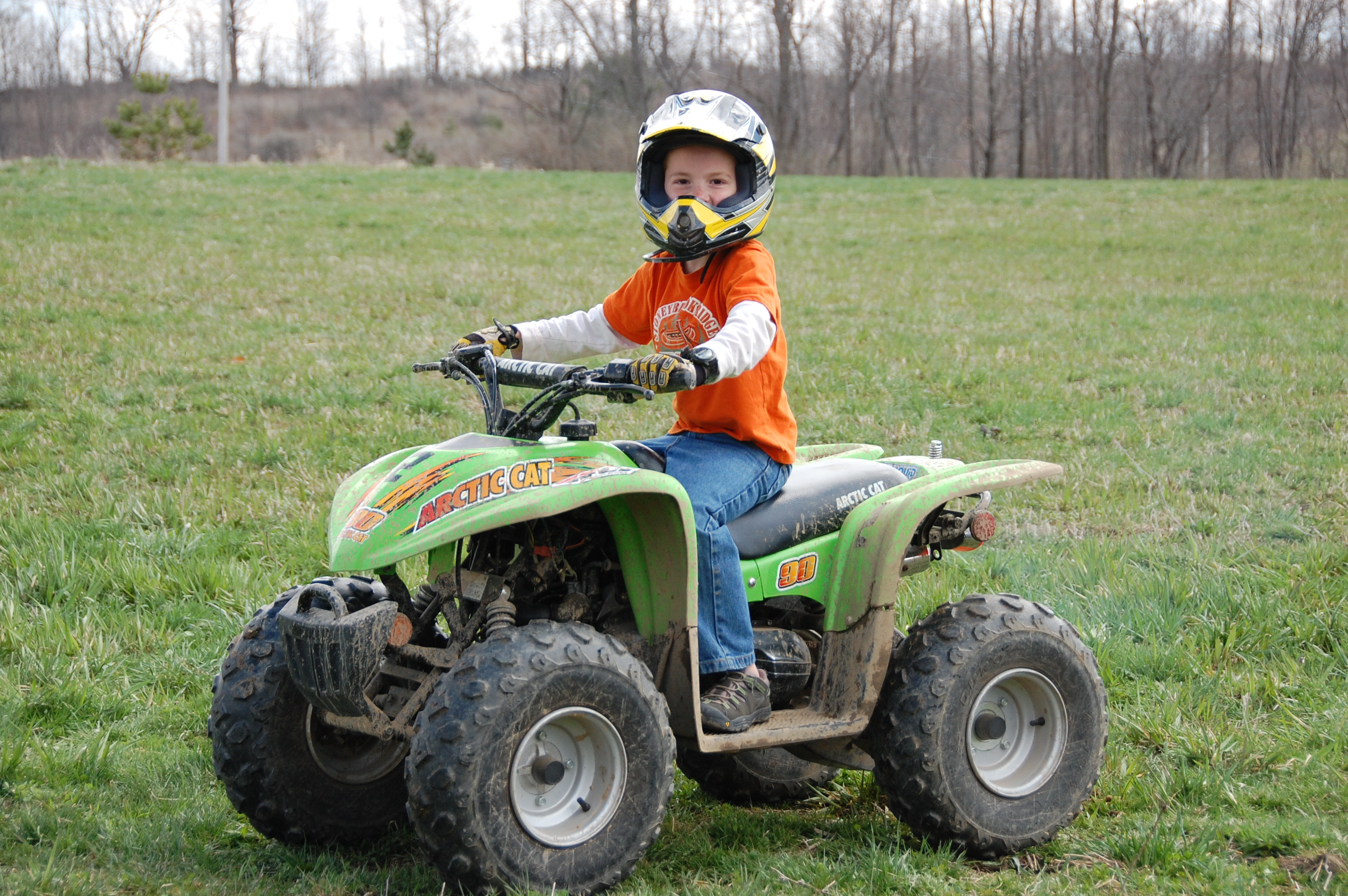 Cooper’s turn to take the 4-wheeler for a spin. 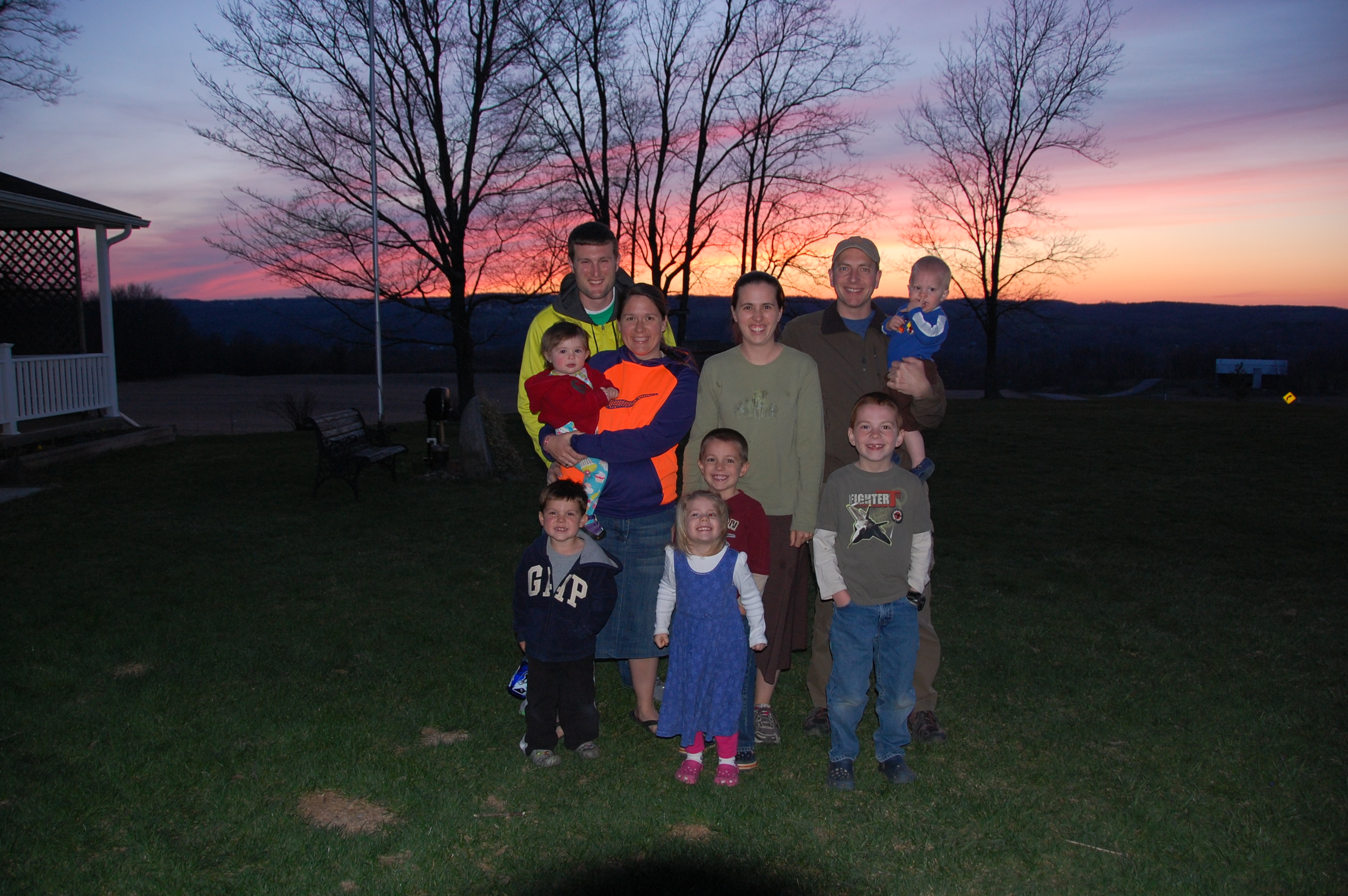 Our traveling party with the beautiful sunset. 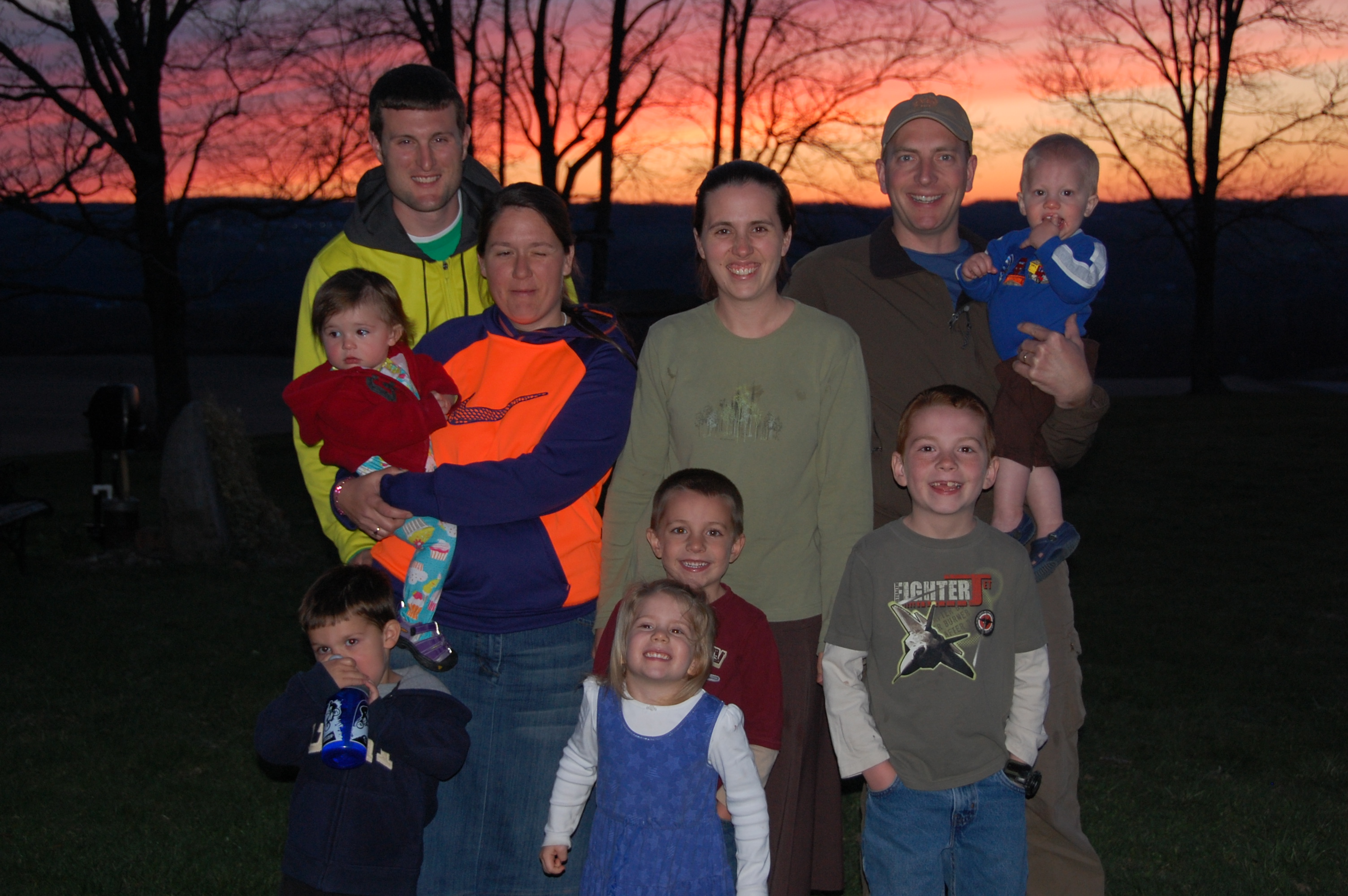 A little closer so you can see who we are. 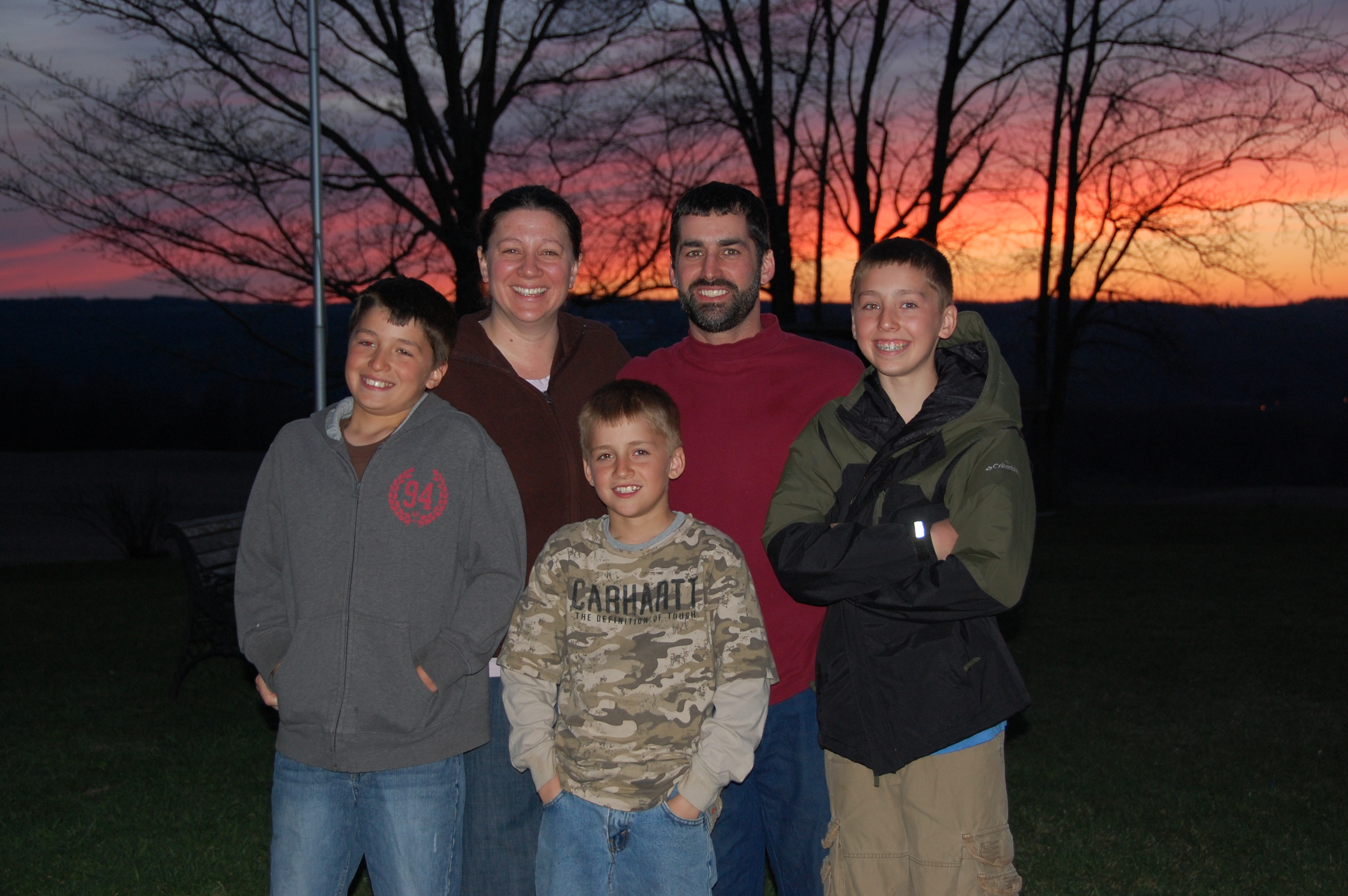 The Wilsons-Our friends we hated to leave behind! We will be back! (That’s a promise or a warning, whichever way you want to take it.) Thanks for everything! We love you guys!

We were sad to leave and can’t wait until the next time we can visit. Bryant just cried when we left because he was sad to leave his friends. (So sweet) This time our family and Nate & Cheree’s family traveled back together in David’s 15-passenger van. It worked out perfect for us to be able to take Rich and Tammy their motorhome back so they didn’t have to drive 2 vehicles back with just them. We headed for home at 8:20 and made really good time. The kids started sacking out just a few minutes into the ride and most of them slept the whole trip. Poor Maddi & Kolby had some struggles but overall the trip went really well. We stopped once for gas and had a hilarious experience. We rolled right up to the gas pump and before Chester had hardly put it in park 3 or 4 Asian fellows quickly walked up to the passenger side of the van with backpacks and suitcases. Cheree quickly locked the door as they started to try to open up the side doors. The guys all the sudden got this unsure look on their faces and then sheepishly backed away after seeing our van was full. NO ROOM! We got quick a chuckle out of it and felt a little sorry for the guys as that would be an embarrassing mistake thinking your ride had arrived and to realize you were trying to get in the wrong van. While we were filling up another 15-passenger van arrived to pick them up. We headed on and only stopped for a bathroom break and then to switch drivers once or twice. Chester and Nate drove most of the way but at 2:30am Chester was starting to fall asleep to I drove the rest of the way. We made it home a few minutes before 4 o’clock am. Nate and Chere loaded their stuff up in their suburban and headed on home. I felt bad for them having another hour to try to stay awake but am thankful they made it home safetly. Hopefully their kids let them get some sleep today. Kolby was so happy when we arrived home. He was just laughing and playing but when Chester and I got the other kids tucked in bed and were ready to head to bed ourselves Kolby excitedly went right down in the pack n play and we didn’t hear anything out of him until almost 10:00 am. The older three slept until 9:30 and were so quiet we didn’t even know they were up until I came out of our room at 10:00.

I forgot to mention that while we were gone this weekend that Grandpa Keith and Grandma Lois had stayed at our house. They were able to visit Ian and Kristy on Friday and attend the dinner at David and Janelle’s for Joe and Phyllis’ 60th as well as All-day on Sunday. They ended up deciding to stay the night again on Sunday night so they were here when we got home. It worked out perfect because they were able to sleep in and rest up while we slept in and rested up as well. We were able to have breakfast together and then Bryant and Kaylin were able to play a game with Grandpa. We visited until they left around 2:30 for Philip and Rhonda’s to see the Smiths. Tonight Chester took Cooper and Bryant to his CERT class with him. They were so excited. I think tonight the topic was Search and Rescue so they were all intrigued. 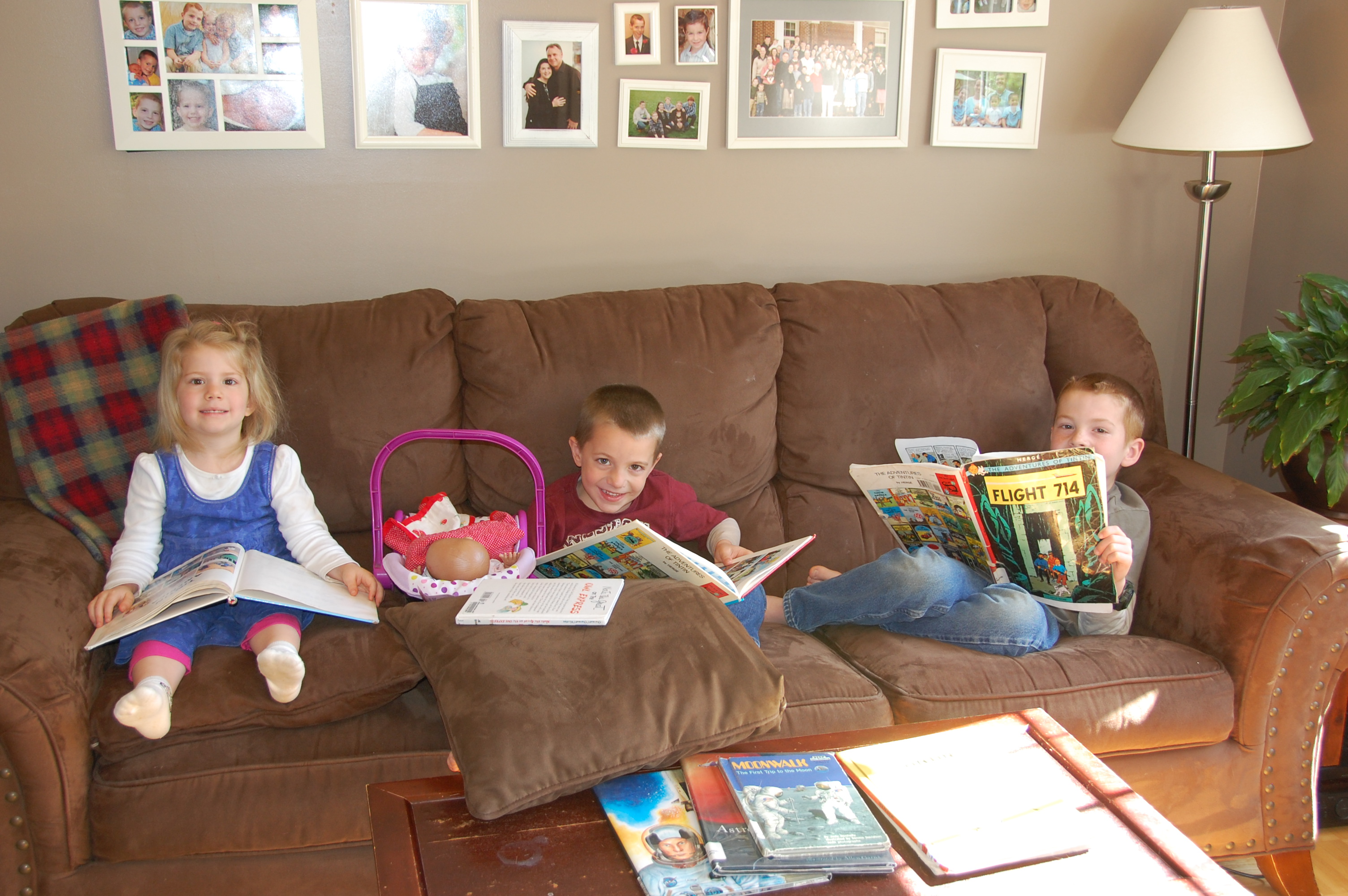 This is where I found the kids when I got up. Thanks guys for letting Dad and sleep! 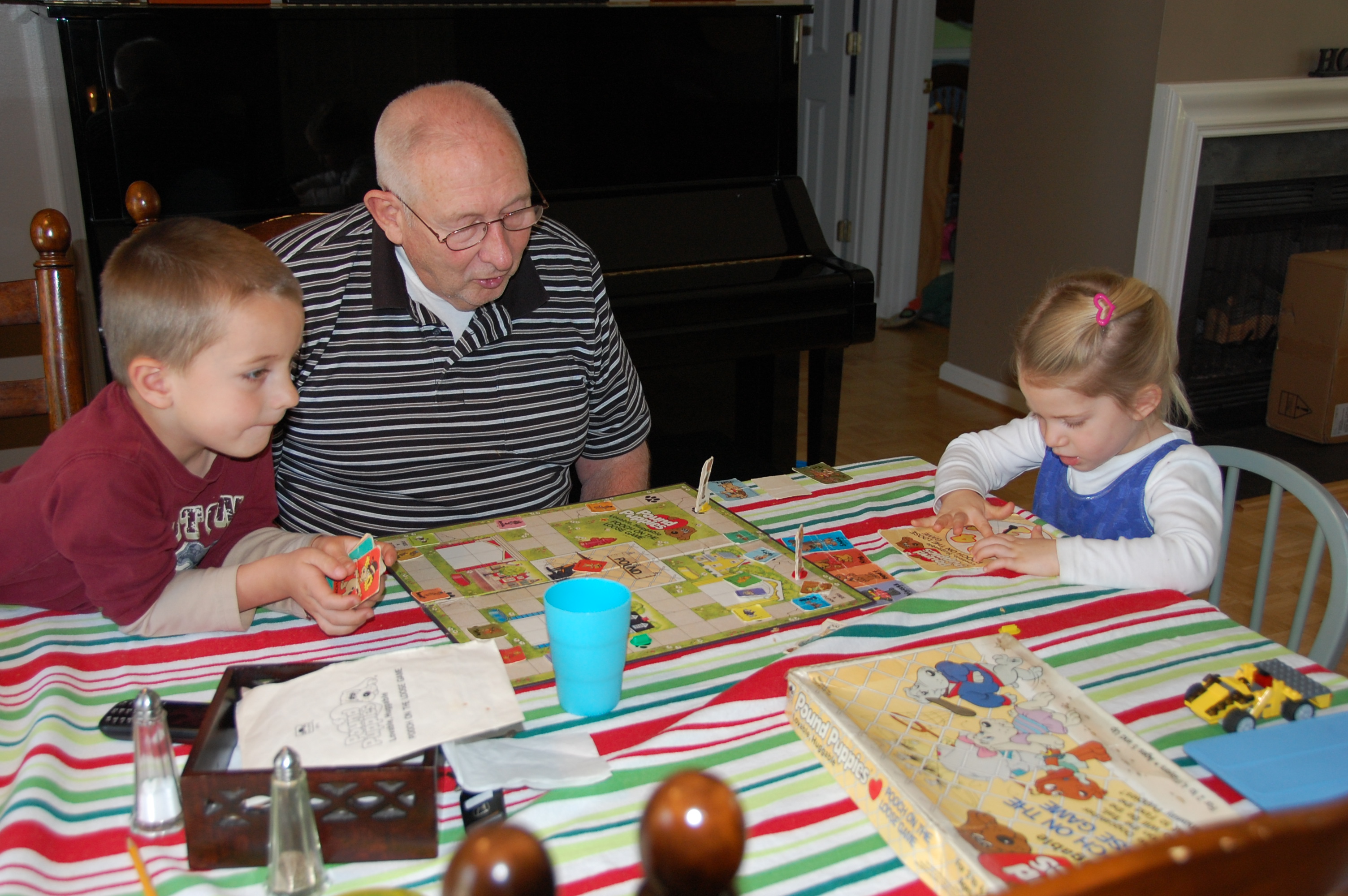 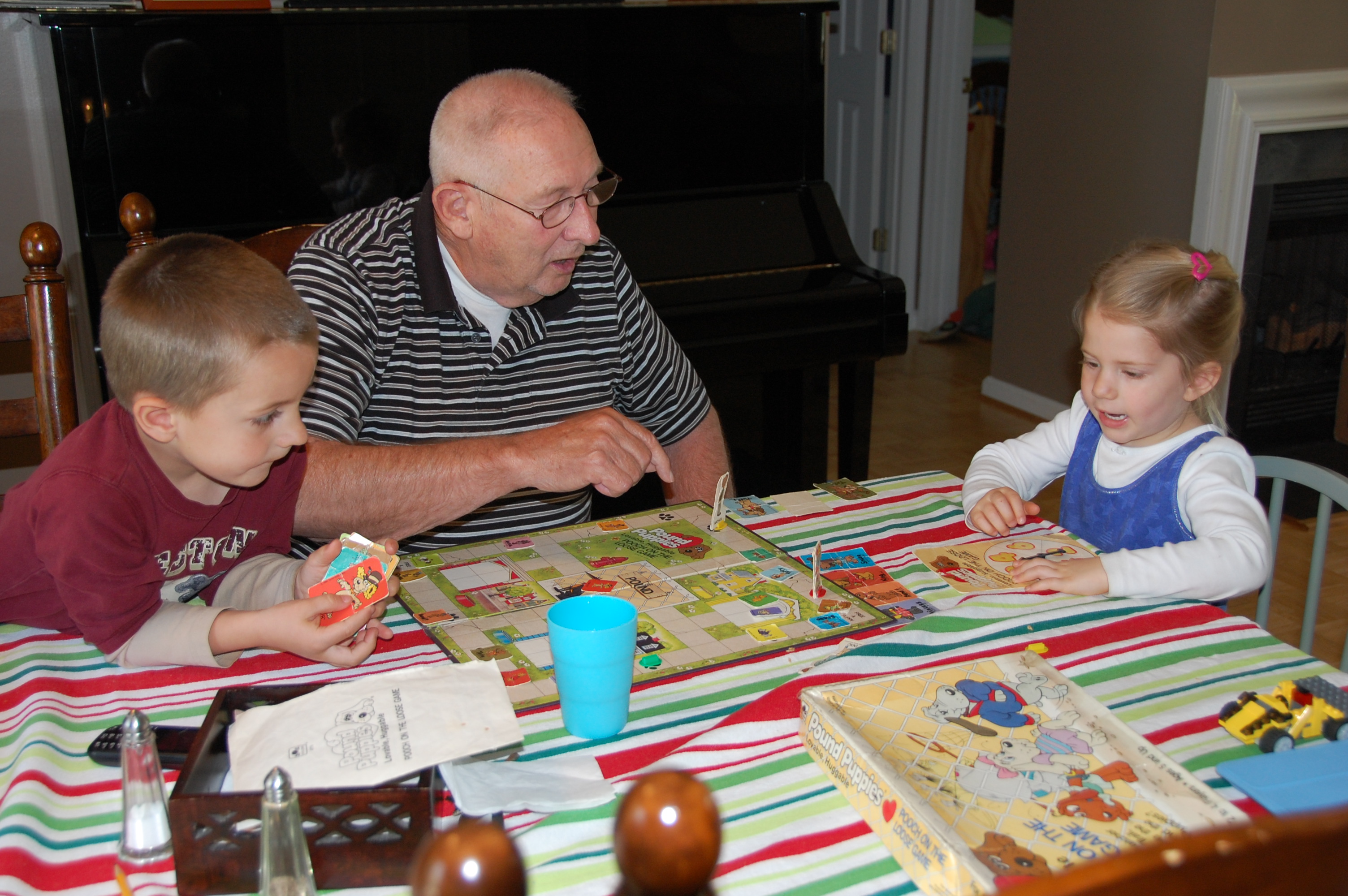 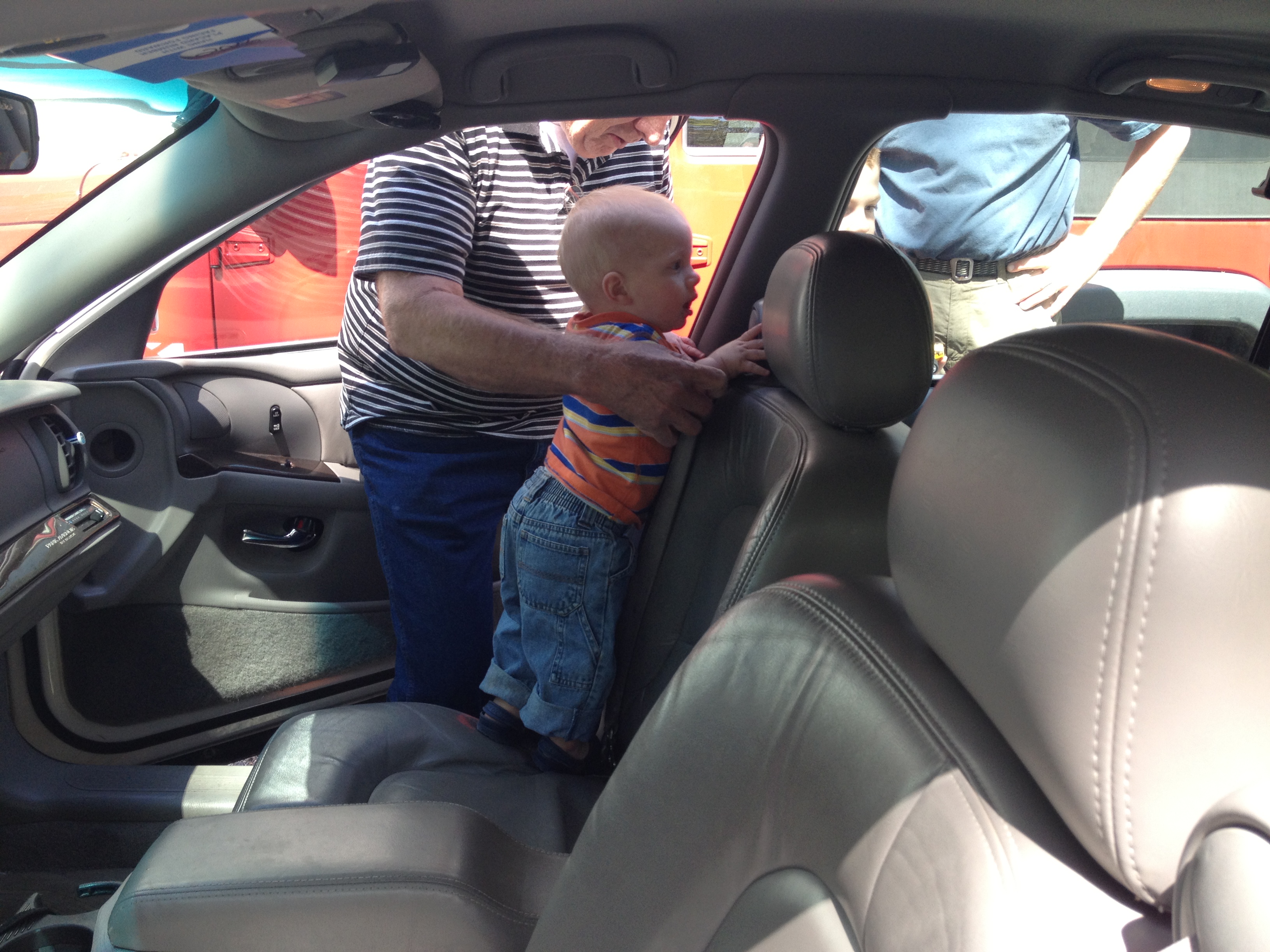 Kolby climbed into Grandpa and Grandma’s car as they were loading up. He loved Gidget and was trying to pet him.

One thought on “Weekend at the Wilson’s”